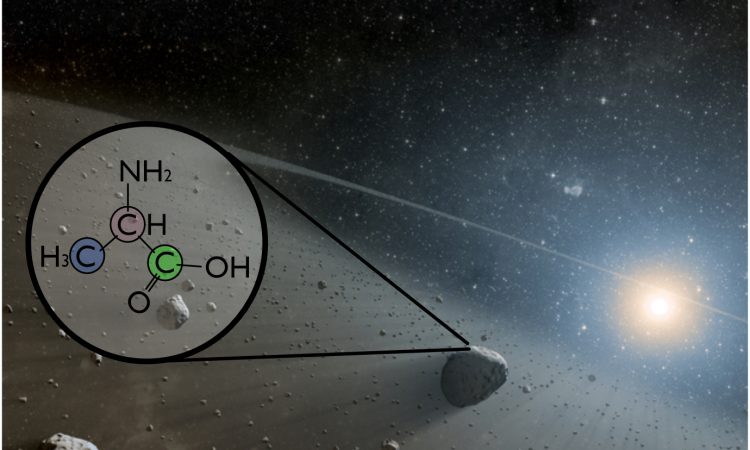 Every living creature on Earth relies on the same set of twenty molecules for its basic functions. These molecules, known as amino acids, link together to build proteins and are often referred to as the “building blocks of life”. All cells either make or consume amino acids to survive. Their universal utilization has led many scientists to believe that amino acids were present during the origin of life. But where did these ancient amino acids come from if life wasn’t already around to synthesize them? The authors of this paper in Geochemica et Cosmochemica Acta study this question and others in a field of science known as “prebiotic” chemistry.

Prebiotic reactions occur without the assistance of biology. It is thought that these reactions are ongoing in many environments, including interstellar space. Some of the best evidence that prebiotic chemistry occurs in space are the abundant amino acids found on meteorites that have fallen to Earth. Scientists like authors Chimiak et al. believe that these molecules were synthesized in the solar nebula (before the Earth formed) using gases like ammonia (NH3) and carbon monoxide (CO). If cosmic chemistry builds the same basic molecules that all organisms use today, is it possible that the biochemistry of life was set by organic molecules that landed on the ancient Earth in meteorites?

To know this, one must first understand where these meteorites and their organic molecules originated. Are the amino acids truly extraterrestrial? Or are they just contamination from the meteorite’s time on Earth? If they aren’t from Earth, where did they form and what reactions produced them? Chimiak et al. investigate the carbon isotope composition of one amino acid, called alanine, to trace its individual carbon atoms back to their cosmic origins, which seem to extend beyond our Solar System.

Carbon isotope compositions are based on the idea that not all carbon atoms are the same (Figure 1). In most carbon atoms, there are six protons and six neutrons, giving it a total mass of 12 atomic mass units (amu) and the name carbon-12 (12C). However, in roughly 1.1% of carbon atoms, there is a seventh neutron. This isotope of carbon is known as carbon-13 (13C). All molecules with carbon have a little bit of 13C in them. The exact amount of 13C can be measured with incredibly high precision, allowing scientists to tell the difference between molecules composed of 1.1000% and 1.0998% carbon-13. This is the equivalent of a bathroom scale that can measure whether a 150-pound man has lost even one ounce of weight. Using these instruments, isotope geochemists have observed a wide range of carbon isotope compositions in the molecules of nature, including amino acids.

This study was investigating a famous meteorite known as the Murchison meteorite. Scientists have measured the carbon isotope compositions of the amino acids on Murchison and found that they were exceptionally enriched in 13C as compared to terrestrial organic molecules. While they were chemically identical, the Murchison amino acids were isotopically “heavy”, distinguishing them from the same amino acids made by life. To do these analyses, they took the amino acid molecule, combusted it into CO2, and then measured the abundance of 13CO2 to derive the average carbon isotope composition of the molecule’s carbon sites (Figure 2).

Chimiak et al. took their isotopic measurements one step further. Rather than combust the entire molecule into CO2, averaging across the carbon sites, they designed a method to measure the 13C-abundance of each carbon site within the amino acid structure. With this new information, they could identify which carbon site was responsible for making the amino acids on meteorites isotopically heavy. What they found was that the C2 position of alanine (Figure 2) had over 10% more 13C than the amino acids produced by life here on Earth. Not only did this provide further evidence that these amino acids were being synthesized prebiotically in space, but it also allowed them to track down the origin of alanine’s synthesis.

Based on this information, Chimiak et al. built a simplified network of chemical reactions (Figure 3) to explain the isotopic composition of each one of alanine’s carbon sites. With this model, they discovered that the C2 position of alanine originated as CO molecules in the interstellar medium (ISM), the space between stars in the galaxy. Carbon monoxide from the ISM is known to have a high 13C abundance. This CO reacted with methyl groups in the ISM to form an aldehyde. This aldehyde was then converted into the amino acid alanine in the solar nebula of our solar system, potentially on the Murchison parent body itself.

Through an investigation of an amino acid’s isotopic structure, Chimiak et al. traced the story of alanine’s three carbon atoms and found that two of its carbon atoms originated outside our solar system. If this synthetic pathway of forming amino acids turns out to be a common one on meteorites, it makes us consider whether the first lifeforms on Earth used extraterrestrial organics to fuel their metabolisms and whether other worlds are building their own trees of life using the same, heavy carbon.