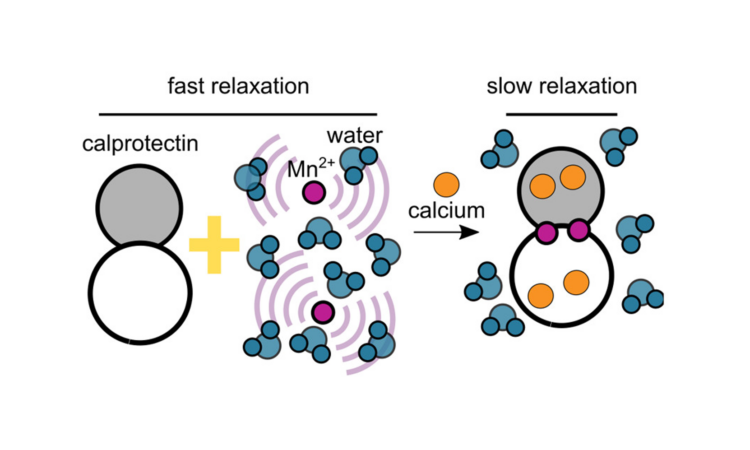 Most people likely associate calcium with strong bones, but it turns out that calcium has a lot of other important functions in humans and other mammals. Calcium is particularly important in the brain, where it can open and close ion channels in neurons (brain cells) to increase or decrease electrical activity [1]. Calcium can also act as a neurotransmitter [1], which is any molecule that transfers a signal from one neuron to another across a synapse which is the extracellular junction between two neurons. Calcium can also alter connection in the brain long-term by regulating: cell growth, the efficiency of signaling across specific synapses, and neuron degradation [1]. Because of this, scientists and doctors want to develop tools to monitor calcium concentration in real-time throughout the brain. Magnetic Resonance Imaging (MRI) is the best technique for imaging the entire brain non-invasively in humans and other mammals. For this reason, the scientists Ozbakir and coworkers decided to create a calcium sensor that could one day be used in brain MRIs.

In a previous work, other scientists developed a protein—a chain of amino acids that folds into a specific shape to perform a specific function within the cell—that could sense certain neurotransmitters in an MRI. Based on this idea, Ozbakir and coworkers decided to design a calcium-sensing protein for MRI use. They chose a protein already produced in humans called calprotectin. In its original function, calprotectin is released by human immune cells when microorganisms are near. Calprotectin binds transition metals like manganese ions (Mn2+) to keep these metals away from microorganisms that require these metals to grow and infect humans. However, calprotectin does not bind manganese well unless it binds calcium ions (Ca2+) first—four calcium ions for every two manganese ions (Fig. 1A). Importantly, an MRI signal comes from excited water molecules, but Mn2+ can destroy the MRI signal when it comes into contact with water molecules. Calprotectin is able to keep Mn2+ away from water molecules in the sample whenever calcium is present.

First, Ozbakir and coworkers tested the ability of calprotectin to prevent Mn2+ destruction of the MRI signal with or without “saturating” amounts of Ca2+ (meaning enough Ca2+ to fill all Ca2+ binding sites present on all calprotectin proteins in their experiment). The scientists found that when calprotectin was present, increasing the Mn2+ concentration in the absence of Ca2+ did destroy the MRI signal quickly, but adding Ca2+ blocked this destruction. The speed of MRI signal destruction was determined by measuring two MRI parameters: the relaxation times T1 and T2. In an MRI, “relaxation” describes the destruction of the signal because the signal comes from excited water molecules. Longer relaxation times mean that the signal is present for longer. Thus they found that increasing Mn2+ concentrations shortened the relaxation times T1 and T2 when Ca2+ was not present (Fig. 1B,C). Adding saturating amounts of Ca2+, however, caused calprotectin to bind 35-times the amount of Mn2+, so T1 and T2 relaxation times were not shortened as much by the Mn2+ (Fig. 1B,C).

Although the scientists want to eventually test their sensor inside real human neurons, that can be a tricky experiment to complete. As an easier initial test, the scientists took a sample of cells from a mouse hippocampus, and broke these cells open to work with the cell lysate (the broken-open contents of the cells). They chose to add 0.04 mM calprotectin and 0.03 mM Mn2+ because these concentrations showed the greatest difference with Ca2+ versus without Ca2+ in their first experiment (Fig. 1B,C). However, the saturating concentration of Ca2+ used in their first experiment (2 mM), is higher than any real cell would have. Therefore, for their hippocampal cell lysate experiment, the scientists tested three biologically relevant concentrations of Ca2+: 0.024 mM, 0.005 mM, and 0.001 mM. Excitingly, even these low Ca2+ concentrations gave significant protection to the MRI signal, with more protection seen from 0.0024 mM Ca2+ than 0.005 mM and especially 0.001 mM (Fig. 1D). Overall, this shows that their calcium sensor works at least outside cells, with MRI relaxation taking longer the more Ca2+ is present.

Future steps, of course, will require the scientists to test their sensor inside in-tact neurons, and if that is successful, inside a real brain. There is a lot of work still to be done before this sensor could be used by doctors, but the scientists are hopeful based on the past success of a protein sensor for neurotransmitters. If this new calcium sensor can be perfected for use in the human brain, it could one day be extremely useful in monitoring the effect of local calcium concentration in disorders such as seizure disorders or neuronal damage.