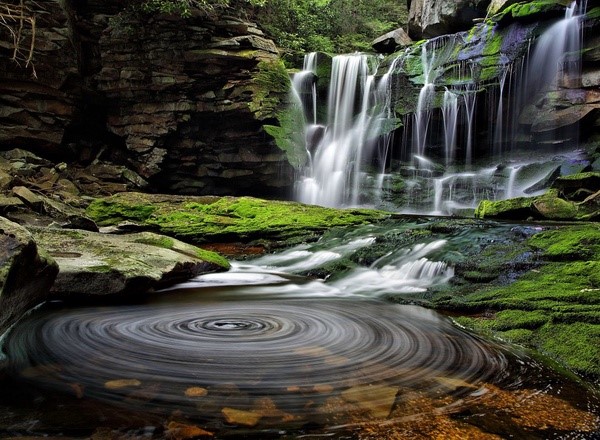 Title: Molecular-Level Insights into the Formation of Traditional and Novel Halogenated Disinfection Byproducts

Our drinking water comes from both surface and ground water. This drinking water is often treated with chlorine to eliminate dangerous biological organisms and pathogens. However, disinfection byproducts (DBPs) are formed when water with dissolved organic matter is treated with chlorine. These DBPs are of growing concern because they are potentially harmful to human health.

Dissolved organic matter (DOM) from ground water mainly consists of carbon-, hydrogen- and oxygen-containing chemicals that range greatly in size and originates from soil and sediment. Little attention has been given to DBPs produced through groundwater even though over 30% of the US drinks groundwater. Besides a handful of regulated trihalomethanes  (THMs) and haloacetic acids, not much is known about DBPs. Researchers at the University of Wisconsin Madison investigated the structure of these halogenated DBPs using both UV-visible spectroscopy and mass spectrometry.

Samples were collected from various ground and surface water sources in Wisconsin prior to disinfection. Both deep (sources that penetrate bedrock) and shallow (sources that don’t penetrate bedrock) groundwater samples were collected. Researchers found that deep sources had less DOM than shallow ones. They used UV-spectroscopy to probe the aromaticity or the relative degree of cyclic carbons of their samples. The molecular composition of DOM and DBPs were characterized using Fourier transform-ion cyclotron resonance mass spectrometry (FT-ICR MS), which gives high-resolution data on the mass of the sample’s molecular composition and their relative quantities. This technique allowed the researchers to make well-educated guesses of the chemical formulas, but not the structure.

The researchers determined that the shallow groundwater had the most unique set of chemical formulas at 4422 total. The scientists also calculated the H:C and O:C ratio of each formula, which can show how oxidized/reduced a chemical is compared to another, and in turn how reduced/oxidized the collective samples are to one another. These data can be represented by a van Krevelen diagram which visually depicts the molecules composition. Molecules with larger O:C ratios are more oxidized and molecules with larger H:C ratios are more reduced. These diagrams also have boxes that show were lignins and tannins, large organic compounds found in plants, fall in this diagram and thus molecules can be described as shifting to be more lignin- or tannin-like.

Another way they probed their water sample composition was by looking at chlorine demand – how much chlorine reacts with the sample’s DOM, normalized to the mass of DOM, after 24 hours. They found a greater chlorine demand from deep groundwater samples, but theorized this may be overestimated due to reactions with inorganic particles, such as Mn and S. Despite this, they still used the chlorine test as a tool to indicate reactivity of the DOM. After chlorination, there was an increase of novel DBPs with chlorine in the lignin and tannin-like regions. This indicates that that electron-rich, aromatic molecules were the main precursors leading to more highly oxidized products.

The researchers then went on to compare expected (THMs and HANs) and novel DBPs. They found if the THMs and HANs were formed, it was more likely that there was a large degree of the novel chlorinated compounds. The researchers concluded that this positive correlation could be exploited to use these known, well defined DBPs as proxies for larger novel DBPs.  Figure 1 summarizes the various properties that correlate with the H:C and O:C ratio using four van Krevelen diagrams. From these data the researchers concluded that DOM that started out more aromatic and more oxidized was more prone to form halogenated DBPs.

Further work is needed to characterize the wide variety of groundwater sources which leads to large differences in DOM. While the toxicity of the DBPs cannot be inferred from this study, the results show that there are many potential DBPs created that resemble THMs and HANs. Hopefully, municipalities will be concerned with how the starting organic material in their water supply can affect the water after disinfection. While disinfection is necessary to prevent large-scale health issues from pathogenic organisms, this data strongly suggests a reason to move away from chlorine as a primary water disinfectant.