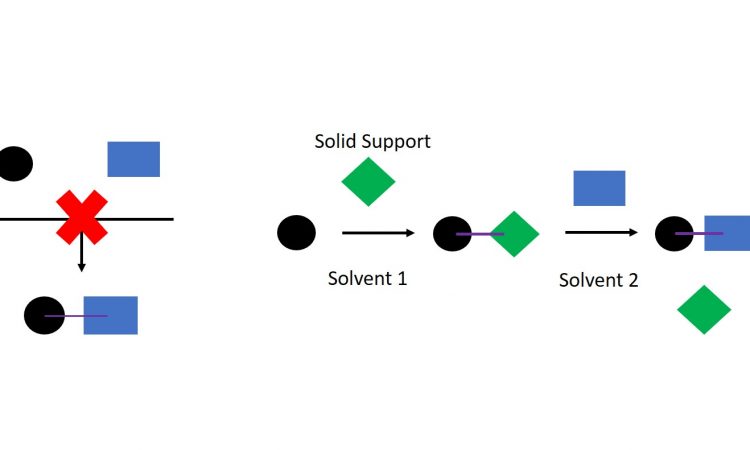 Title: An Efficient Method for the Conjugation of Hydrophilic and Hydrophobic Components by Solid-Phase-Assisted Disulfide Ligation

We know that complementary functional groups are needed for strong intermolecular interactions, and that thermodynamics favours hydrophilic and hydrophobic groups each keeping themselves to themselves. So, problems can arise when trying to react very hydrophilic and very hydrophobic molecules together. This group of scientists has devised a way around the problem using a technique called solid-phase synthesis.

So, that should all be fine then – just use some well-studied, robust, tolerant synthetic method (for example so-called ‘click’ chemistry) to make your conjugate. But you may have spotted another problem – how are you going to run this reaction? Both the hydrophilic and hydrophobic reactants  need to be soluble in the same solvent. It may be hard to find a solvent that suits both molecules given their completely different preferences for solvation (which was the whole point in the first place!).

In this work, the authors have overcome this issue by performing the synthesis on a solid support – a process often termed ‘solid phase synthesis’. The principle is shown in Figure 1 below. The key is that once the first reactant (circle in Figure 1) is attached to the solid, the solvent in the next step (solvent 2) need only dissolve one of the reactants (the rectangle), neatly side-stepping the issues of solubility.

Figure 1: Two reactants that cannot be mixed in a solvent system (black circle and blue square, left) are reacted together on a solid support (green diamond, right). First one of the reactants is attached to the solid, then it is conjugated to the second reactant before being removed from the support.

The process was employed to solubilise derivatives of plinabulin, a drug with potential applications in the treatment of lung cancer. One of the conjugates made in the paper is shown in Figure 2. Figure 2: A disulfide conjugate of a plinabulin derivative made in the paper. The original plinabulin drug backbone is shown in blue.

Some optimisation was needed to get the conditions right, and there are some details in the paper of the solvent screening and pH dependency tests for some of the steps, checking the effectiveness of the reaction using High Performance Liquid Chromatography (HPLC). Check the paper if you are interested in these details.

Whilst this is a good breakthrough for the research team (in making a conjugate they could not have made in other ways), the idea is still in its relative infancy and the yields (29-45 %) are lower compared to other solid-phase processes. One possible issue is that the disulfide bond, unlike many linkers commonly used in conjugation, is abundant in nature. This may leave it vulnerable to being cleavage. The redox reactions interconverting disulfide and thiol groups are the main redox reactions of living cells, so the linkage may be very sensitive to the cellular redox environment. Depending on the effect of losing the ‘carrier’ from the drug at that stage, this could conceivably be an advantage or a disadvantage.

So if you can’t get two things into the same solvent the answer could be solid phase synthesis. The group mention the prospect of using exploiting this technology, already used as standard in peptide synthesis, for natural product synthesis too – watch this space…