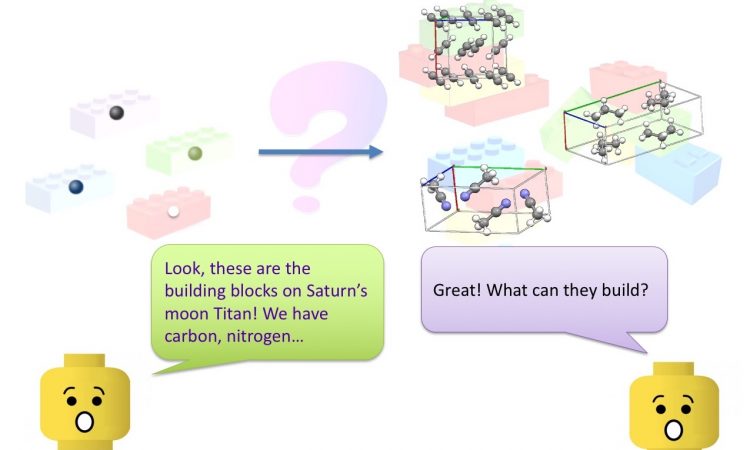 With observations both from spacecraft and from telescopes on Earth, we know much about how chemicals are distributed throughout the cosmos. This gives us a great idea of how galaxies, stars and planets have formed. Also, through observations from NASA’s Kepler telescope over the last decade, the numbers of exoplanets (planets beyond our own solar system) that have been found has exploded. Each of these discovered exoplanets are new worlds, and once the James Webb space telescope launches we may even be able to observe the surface chemistry of these distant planets, too.

Figure 1 – Chart showing the number of exoplanet discoveries per year through to April 2018, with colors indicating method of detection.[1] (CC BY-SA 3.0).

Knowing the chemistry is all well and good, but it does not always tell us what the materials are. Understanding the materials on a planet’s surface is critical for exploring both the geology that is shaping it and the possibilities for hosting life. We think our nearest planetary neighbours (such as Mars and Venus) are made up of similar materials to here on Earth – but further out in our solar system things get very different.

Take Titan, Saturn’s largest moon, as an example. The joint NASA/ESA mission Cassini revealed a number of surprises about this planetary body’s surface chemistry. For instance, instead of a surface dominated by water-ice, Cassini showed that the surface is coated with small organic molecules. These molecules are generated by radiation from Saturn and the surrounding cosmos that cause nitrogen and methane in Titan’s atomosphere to ionise and combine.  This has been covered by a previous chembite article, which discusses the huge variation in chemistry on Titan. We also see very interesting landforms on Titan. Through Cassini’s radar instrument, dunes, mountains, dried up lakes, and even craters have been mapped on this small world. What are the materials that make up these features, controlling how they are shaped? We know the chemistry – they are made up of the small molecules falling from the atmosphere – but are we sure of the materials they form? What crystalline forms do they take up? How strong are they?

This is where I come in. All of the above have prompted me to undertake a search of the Cambridge Structural Database, which is the largest repository of organic structures in the world, with over 900,000 structures so far. I investigated the list of molecules that are predicted to exist on Titan from earlier studies and ran them through database search.  This has come up with 50 different crystal structures of materials that possibly live on on Titan’s surface.

Figure 3 – Three examples of molecular solids that could be sitting on Titan, a) acetylene, b) propane and c) acetonitrile. [Figure by the author]

So, the output of this was the first list of possible Titan minerals (conventionally, a ‘mineral’ is a naturally occurring material found on Earth, so it is important to make the distinction!).  We then classified these Titan mineral candidates into three categories based on the intermolecular forces that hold them together. If we want to stack pages of papers together, we would use a stapler. If we want to repair our broken models or sculptures, we would use glue. If we want to put molecules together into a solid, we need intermolecular forces.  ‘Molecular solids’ are solids of the pure molucules that are mainly held together by van der Waals forces; ‘molecular co-crystals’ are crystals structures of two or more molecules held by π-hydrogen bonds in addition to van der Waals forces; and ‘hydrates’ are dominated by the hydrogen bonds that hold them together.

There were gaps in the list though – even some of the pure materials, molecules like butene, butatriene and propionitrile, had no crystal structures in the database. We know at the chilly conditions of Titan (it’s usually 92 K), they would be solid. In addition, the planetary ices group at NASA’s Jet Propulsion lab recently discovered a new material, a benzene:ethane co-crystal,[3] and so we think there are many more materials still to be found.  Added to this, many of the materials found in the database were actually measured at temperatures hotter than 92 K, so they should still be stable at this cooler temperature and it is important to check for them.  Plus, now we are starting to wonder if they are resistant to Titan’s environment. In one such study, Dr Morgan Cable, has found that an acetylene-ammonia co-crystal (a material on the Titan minerals list) not only thrives at 92 K, but could hold together in lakes of methane and ethane there.

So there is a lot of work to do, and that’s even before we really get stuck into some of the other worlds in our solar system. Icy planet minerals are very much a growing business!

Author Biography:
“Hello! I’m Helen, and I’m a scientist working at ANSTO and I specialise in finding materials for icy worlds!”
Dr. Helen Maynard-Casely is an instrument scientist at the Bragg Institute of ANSTO (Australian Nuclear Science and Technology Organisation). She studies small molecules and ices under pressure to help us know more about the interiors of planets. She also promotes science communication and writes regularly for The Conversation.