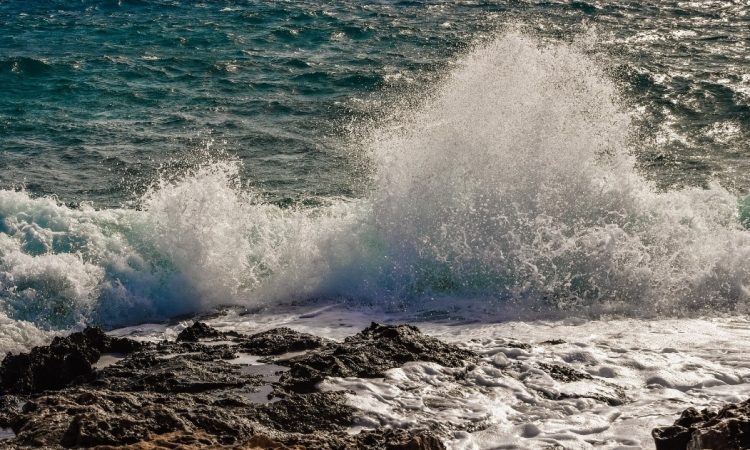 All figures reprinted with permission from May, et. al. Copyright 2018 American Chemical Society.

If you see smog over Los Angeles or people wearing breathing masks in Beijing, then you must wonder about the quality of air that you are breathing. But when you are walking around a lake that has been overrun by harmful algal blooms (HABs), do you ever stop to think about the ramifications this life-form can have on the air quality in that area? That is exactly what these scientists did, and they decided to study how these particles originated and what exactly they were made out of.

On the shores of the Great Lakes, lake spray aerosol (LSA) can be released into our atmosphere in a similar manner to ocean sea spray. Blue-green algae (BGA), the primary component of HABs in freshwater sources, releases toxic products that can be aerosolized when LSA is formed, resulting in HAB toxins exposure to humans. In order to study how the composition of LSA changes when combined with HABs, these scientists took freshwater samples from three Great Lake sites (Lake Michigan-Michigan City, Lake Erie-Catawba, and Lake Erie-Maumee) and created aerosol from them using an in-lab LSA generator. The water sample was circulated in the central chamber of the instrument and four plunging jets created bubbles, which subsequently burst at the water sample surface to create aerosol particles. The resulting particles were then characterized by a range of analytical techniques, including time-of-flight mass spectrometry and energy dispersive X-Ray spectroscopy, in order to determine the components of the aerosols and how they changed depending on site location and particle diameter.

Three individual aerosol particle types were identified during this experiment: LSA primarily composed of inorganic salts (LSA-Salt), LSA with elevated organic content (LSA-Organic), and LSA with biological material (LSA-Bio). Figure 1 illustrates energy dispersive X-ray spectra of the LSA-Salt, LSA-Organic, and LSA-Bio particles in panels A, B, and, C, respectively. The intensity of a peak at a given energy level corresponds to the particle identity and its relative abundance in the LSA. The LSA-Salt spectrum was characterized by inorganic sodium, magnesium, and calcium cations, while the LSA-Bio spectrum contained nitrogen, phosphorus, and potassium signals, elements which are know markers of biological activity. These results suggested that nitrogen and phosphorus could be used as indicators of biological activity when characterizing LSA or ocean spray to identify HABs in a water source. In addition to identifying the components of LSA in general, these scientists determined how the abundance of BGA at a site dictated the abundance of LSA-Bio. The top panel in Figure 2 shows that the Lake Erie-Maumee site had the highest BGA biological activity at approximately 80 ppb. This site produced the highest submicrometer (approximately 15%) and supermicrometer (approximately 45%) particle number fractions of LSA-Bio particles, as shown by the dark green segments. Lake Michigan-Michigan City had the lowest biological activity of BGA, therefore its LSA was primarily dominated by LSA-Salt and LSA-Organic species rather than LSA-Bio species. The scientists also found that the number fraction of individual LSA-Bio particles increased as particle diameters rose from 0.4 to 1.5 um in the particles from the Lake Erie-Catawba and Lake Erie-Maumee sites (the bottom panel Figure 2), consistent with the fact that these two sites contained the most active BGA. The information on LSA particle composition, particle type fraction, and particle size unveiled by these scientists is extremely important for improving our understanding of the atmospheric impacts of LSA and general sea water spray on human health, particularly in regions such as the Great Lakes where people are exposed to large freshwater surface areas, high wind speeds, and rising HAB severity. By understanding how these aquatic toxins enter our atmosphere, future scientists can model chemical reaction pathways between these species and other atmospheric compounds in order to establish a more complete picture of atmospheric chemistry and air quality model simulations.