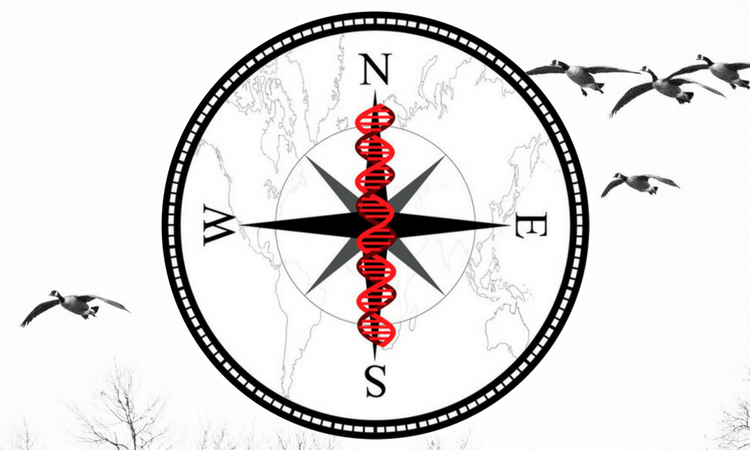 Featured image and all figures used with permission from Zwang et al. via ACS AuthorChoice open access. Featured image has been modified from the original.

Spring has sprung and birds are in the air! We see them migrate every year and we’ve mapped their migration routes, yet we still have questions about how birds navigate. For almost 50 years we’ve known that birds use the Earth’s weak magnetic field to point them in the right direction, and some studies have suggested that a bird’s internal magnetic compass is linked to vision. But scientists have not yet determined how birds sense magnetic fields – or rather, to get technical, what they use as “magnetoreceptors.”

But in the 1970s chemists discovered chemical reactions that are affected by magnetic fields, and the key to this magnetic sensitivity is a “radical pair.” Thus, the prevailing hypothesis for bird magnetoreceptors is the radical pairs found in proteins called cryptochromes, which exist within bird retinas.

Yet it wasn’t until recently that magnetic fields as weak as the Earth’s were shown to significantly affect radical pairs, but not for cryptochromes. Instead, Theodore Zwang of Dr. Jacqueline Barton’s CalTech lab and their colleagues studied a closely related enzyme called photolyase, which repairs DNA using a radical pair mechanism. These researchers conducted clever electrochemical experiments showing that the rate of DNA repair by photolyase is affected by the strength and direction of a magnetic field, even when the field is very weak.

Damage to DNA occurs regularly for a ton of different reasons. Most of the time, DNA is oxidized, meaning it loses an electron. This leaves behind a lone “unpaired” electron, making the molecule a radical. And, if you get two radicals very close together, they can form “radical pairs” – the very same radical pairs thought to act as magnetoreceptors in birds.

The unpaired electrons are key to making radical pairs sensitive to weak magnetic fields. Due to their “spin” and electric charge, electrons are like tiny magnets – they have a magnetic dipole moment. Just like the bar magnets you played with as a kid, electrons have two magnetic poles that align themselves in opposite directions when they get close together and “pair.” Thus, the magnetic moments of two paired electrons cancel each other out. But when unpaired, like in a radical, an electron acts like a tiny compass needle.

The researchers teased out the magnetic field dependence of the DNA repair reaction with a well-designed electrochemistry experiment, observing the extent of DNA repair in the presence or absence of photolyase, blue light, and magnetic fields. (The “photo” in photolyase means the enzyme uses energy from light to perform the reaction, in this case blue light is needed.) DNA was attached to gold electrodes, photolyase, blue light, and/or a magnetic field was added, a voltage was applied, and the current was measured. The current was observed as the voltage was scanned up and then back down, in a technique called cyclic voltammetry (Figure 1).

Because of defects in the structure of damaged DNA, transfer of charge is hindered until the DNA is repaired. Thus, increases in current were taken as a proxy for DNA repair. Maximum currents were observed when both photolyase and blue light were present, indicating that both are needed for the repair to occur, as expected.

When the researchers added a magnetic field to the experiment they also integrated the current over time to get the total amount of charge transferred to the DNA. The rate at which this charge transfers is directly related to how quickly the reaction takes place. As Figure 2 shows, the charge transferred more quickly under weaker magnetic fields – the stronger the field, the slower the DNA was repaired. The angle of the magnetic field relative to the aligned DNA strands also affected DNA repair rates.

This work shows that photolyases could act as magnetosensors, as there is significant variation in DNA repair rates that depend on magnetic field strength and, very importantly, direction. They likely remain sensitive under very weak magnetic fields, similar in magnitude to the Earth’s. The role of blue light in this mechanism is also consistent with previous experiments that indicate vision informs a bird’s inner compass.

While by no means definitive, this is an encouraging step forward. Many questions still remain. These studies seem to indicate the radical pair is responsible for the magnetic sensitivity of the reaction, but some scientists contend that radical pairs disappear too quickly to respond to a magnetic field. Are there other explanations for the observed magnetic field effect? Do birds even have photolyases? One day, scientists may navigate us to the answers.