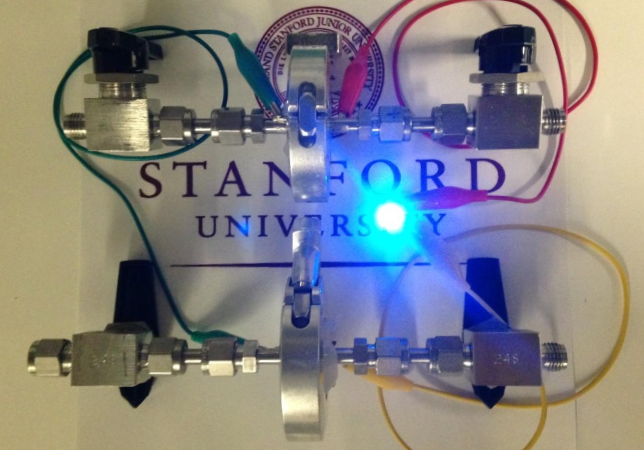 This work presents research into a new, cost effective battery design based on manganese sulfate and simple carbon electrodes. It’s the first of it’s kind, and will spur research and development into new battery technologies for grid scale energy storage.

Lithium-ion batteries provide portable energy to power the 21st century. Their lightweight design is prefect for our laptops and smartphones. For large scale, grid size energy storage required to deploy renewables like wind and solar, Li-ion is not cut out since it’s very expensive. Other technologies, like the lead-acid batteries in your car, won’t make it either due to their cost. To match storage needs of a huge energy grid, researchers have been trying to find an earth abundant battery material that is based on cheap water based chemistry. These batteries also need to have high energy densities and high stability to be viable, which makes this a tall order.

Researchers from Stanford used manganese to develop a new battery design by looking at unique redox couples, the species that shuttles electrons around the battery, allowing it to charge and discharge. They used manganese sulfate (MnSO4) in water as their electrolyte and redox couple, since MnSO4 is highly soluble and very cheap. While charging their battery, Mn(II), from the manganese sulfate is oxidized to Mn(IV) as manganese dioxide, which deposits on the carbon cathode (positive terminal) while giving up electrons (Figure 1). At the anode (negative terminal), a platinum/carbon electrode reduces water (H2O) to generate hydrogen gas. During discharge, the exact opposite happens, and MnO2 is redissolved and H2 gas is oxidized back to “water”.

This process effectively cycles back and forth discharging and recharging at incredibly high efficiencies (100% after “activation cycles”) for an aqueous battery. It also has remarkable stability, cycling 10,000 times without any sort of decrease in performance, which is a common issue of aqueous batteries.

If this manganese battery sounds like a simple idea, it’s because it is; other researchers have tried it before. Previous work started with pre-made MnO2 cathodes which dissolved/degraded in aqueous solution, and with the mixed electrolytes previously used, this ruined the battery. But with each complete cycle in this new battery, the researchers are plating the MnO2 onto their simple carbon felt cathode and intentionally redissolving it, which circumvents the issue of degrading the cathode. With water and hydrogen being the other redox couple, this makes for an extremely cheap, and environmentally friendly battery, with high efficiency. Figure 1. The schematic showing the charge and discharge process where MnO2 is coated and dissolved reversibly on a carbon felt cathode. At the anode hydrogen gas is produced by the platinum on carbon felt.

The researchers didn’t just stick with the small scale batteries typically shown in publications. As a more convincing proof of concept, the group made a relatively huge 2 cm diameter, membrane free Mn-H cylindrical cell (Figure 2 left). The cell was made from using thicker cathode carbon felts with larger surface area. The discharge capacity (how much energy can be extracted) was roughly 4 times their small prototype cell. This large battery maintained the performance of the small cells, with high charge/discharge efficiency of 96.7% (Figure 2 right) and was largely stable up to 1,400 cycles.

Figure 2. Left: a graphic of the large cylindrical cell, with the real picture next to it. Right: the discharge behavior of the large battery, showing most of the charge at 10 and 15 mAh is extracted (i.e. the lines reach close to 10, 15 mAh at 0 V).

This battery is very simple and uses cheap materials which makes it attractive for large scale energy storage. It’s highly stable, as well as highly efficient. The down side right now is the battery is based on low performance carbon felt as electrodes, which could easily be replaced for something with higher surface area and conductivity. In addition, the platinum catalyst used for the hydrogen production is considered expensive, but this could be replaced by a number of cheaper materials (e.g. Ni2P, WC) thanks to all the research on making hydrogen gas as a fuel.

This is an exciting report for battery researchers everywhere, as it opens up a whole new method of making cheap batteries capable of grid scale energy storage.