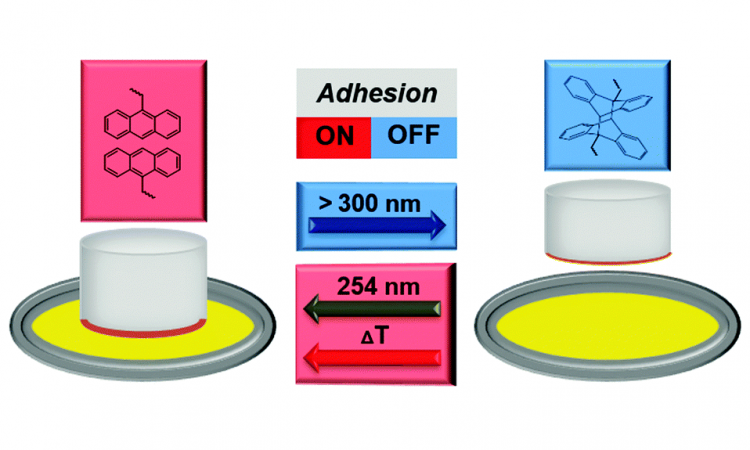 Title: Switching “on” and “off” the adhesion in stimuli-responsive elastomers

One of the new and exciting things scientists are always working on is designing new materials that have properties you can control. Being able to change the chemical nature and the properties of something without having to douse it in reactive chemicals opens up lots of new possibilities. In this paper, the scientists are working towards a reversible adhesive: a material that can switch back and forth between being sticky and not sticky with just light and temperature!

To start, we should talk about what makes something sticky in the first place. Adhesion is when two different materials have a tendency to attach when touching. This can happen in many different ways, but the adhesive made in this paper works by having long chains of molecules interact with another surface. These long chains feel dispersion forces (which are attractive) with the other surface, holding the two together. Because the chains are long, they grab onto the surface with more strength. Think about hanging a weight off of a strip of tape; a longer strip would hold more weight than a shorter strip.

The authors controlled how sticky the material is by designing a specific chemical that can react with itself to reduce of these long chains. The molecule was a polymer made up of an adhesive used in the past called hydrogenated carboxylated nitrile butadiene rubber (HXNBR) and a molecule called anthracene (Figure 1-Left). By using a version of anthracene (called epoxide anthracene), the authors synthesized a new molecule, called anth-HXNBR, which has anthracene molecules attached to parts of the HXNBR (Figure 1-Middle). Anthracene is special because it can react with other molecules of itself with ultraviolet (UV) light to form one larger molecule. This process is called photodimerization. When the anthracene isn’t reacted with itself, the long chains of the polymer can wave around and stick to surfaces, meaning that the material is sticky. But when UV light (with a wavelength less than 300 nm) is shined on it, the anthracene reacts with itself, locking the different polymer chains in place in a process called crosslinking (Figure 1-Right and Bottom). This means that the long chains can’t touch other surfaces as well and the material isn’t sticky any more.

But the anth-HXNBR isn’t stuck like this! The crosslinking can be undone in a couple of ways. First, heating the material at 70 °C for 20 minutes separates the anthracene molecules from each other, freeing the polymer chains and making the material sticky again (Figure 1-Right to Middle). This is called “thermolysis,” since heat (“thermo-“) is breaking (“-lysis”) the bonds. Secondly, shining light with a specific wavelength (254 nm) can also undo the crosslinking (Figure 1-Bottom to Middle). This is called “photolysis,” since light (“photo-“) is used. The material can be made sticky again just by shining more UV light (wavelength <300 nm) on it!

To test how sticky the new adhesive was, the scientists pressed a piece of aluminum onto the material and measured how much force (in Newtons) it took to lift it up again (Figure 2A). Starting with “pristine” anth-HXNBR that wasn’t crosslinked, the material was very sticky, taking 210 N to lift the aluminum (Figure 2B). But when UV light was used to crosslink the polymer chains, the adhesive force went down to 117 N, nearly half! By both heating and shining 254 nm UV light on the sample, the stickiness came back! The force wasn’t as strong as it was at the start (167 N and 157 N, respectively), but the fact that it became more adhesive meant the reaction worked!

Figure 2: (A) Measurement of adhesion force by immersing and lifting a piece of aluminum out of adhesive. (B) Changing adhesive force with crosslink formation and breaking. Adapted from S. Kaiser, S. V. Radl, J. Manhart, S. Ayalur-Karunakaran, T. Griesser, A. Moser, C. Ganser, C. Teichert, W. Kern, and S. Schlögl, Soft Matter, 2018, 14, 2547 with permission from The Royal Society of Chemistry.

The authors could even make parts of the material sticky while keeping other parts not sticky. By crosslinking a whole surface of the material and then using photolysis on only part of it, they could change which areas had the crosslinks removed and which areas didn’t (Figure 3A). The dark part of the image shows a place where the 253 nm light didn’t hit the sample, so the polymer is still crosslinked and the adhesion force is much lower (Figure 3B). By scanning over the white line in the image, the adhesion force could be graphed (Figure 3C). This shows that the authors can “print” the sticky parts on just certain parts of a surface!

Figure 3: (A) Description of types of UV light shone on different parts of the material. (B) Map of adhesive force across area where crosslinks were kept (I) and removed (II). (C) Graph of adhesive force across white line in (B). Adapted from S. Kaiser, S. V. Radl, J. Manhart, S. Ayalur-Karunakaran, T. Griesser, A. Moser, C. Ganser, C. Teichert, W. Kern, and S. Schlögl, Soft Matter, 2018, 14, 2547 with permission from The Royal Society of Chemistry.

Although this new material is very promising, this process still isn’t perfect. The reactions to make crosslinks and de-crosslink the polymers have to be done in a nitrogen atmosphere, since regular air would cause other reactions to happen, reducing the stickiness of the material. Also, after cycling back and forth, the adhesion is never as good as the first time, since other byproducts start building up. But this new material represents a huge step towards making usable, reversible adhesives that you could one day use in your house!