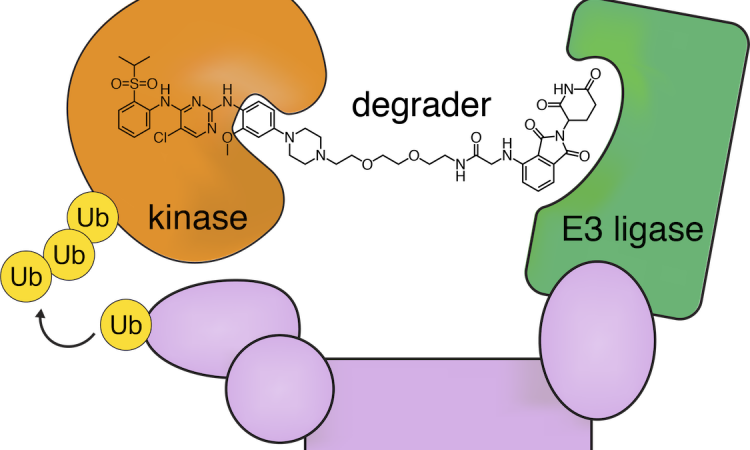 Kinases in Human Health and Disease

What happens when the key players in the orchestration of the cellular processes goes rogue, and how can scientists reign them in without ruining the show?

Cells must sense information from the environment and convert that information into an action, a process known as cell signaling. Protein kinases play essential roles in signaling by transferring a chemical phosphate group to other “target” proteins and switching them into an active or inactive state (Figure 1). Rogue kinases cause cells to misbehave and are at the root of many human diseases, including cancer, inflammation, and degeneration.

For decades, scientists have tried to cure diseases by blocking rogue kinases with drugs, but designing effective kinase drugs is challenging for many reasons. Because kinases have similar structures, drugs can block normal as well as misbehaving kinases (an issue known as “off-target effects”). Even when a drug blocks the “switch” activity of a specific rogue kinase, the disease state may persist because of the kinase’s so-called “scaffolding functions”: just by being there, kinases can host signaling proteins that meet and potentially initiate inappropriate responses.

An Emergent Method for Targeting Kinases

Given these challenges, scientists have been trying a different approach: using small molecule “degraders” to flag the kinase for destruction by the cell’s own recycler, the proteasome (Figure 2). In this work, Powell et al. designed degraders targeting anaplastic lymphoma kinase (ALK), which is involved in T-cell non-Hodgkins lymphomas and breast cancers.

The degraders 9 and 11 consisted of the ALK-binding drugs TAE684 and ceritinib connected to the E3-binding molecule pomalidomide by a polyethylene glycol linker. The E3 ligase enzyme attaches a molecule called ubiquitin to the kinase, and then the kinase is degraded by the proteasome (Figure 2).

The Road Ahead for Kinase Degraders

This study highlights some of the opportunities and challenges of using degraders to block rogue kinases. The degraders successfully targeted ALK for destruction. However, scientists have much to learn in the ways of degrader design: why are other types of kinases degraded better than ALK even though TAE684 and ceritinib bind ALK most strongly? Are there ways to engineer better degraders by changing the linker length or orientation? Can recruiting a different type of E3 ligase with a different E3-binding ligand change the way the kinase is degraded? Unlocking the therapeutic potential of degraders will require advances from medicinal chemists, chemical biologists, biochemists, and structural biologists. Maybe you can join the team!