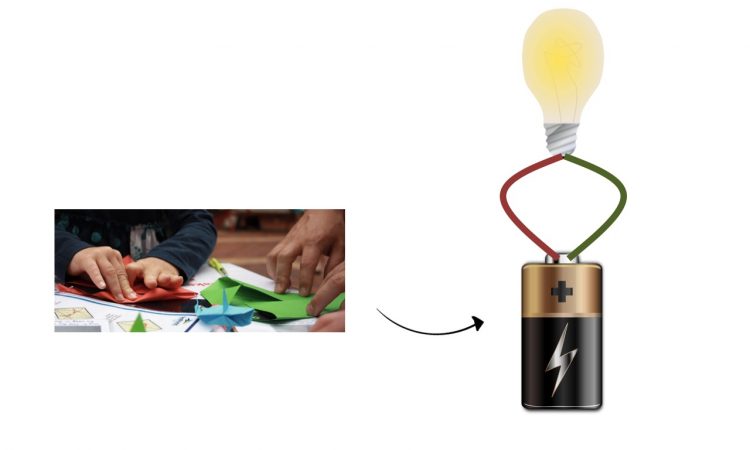 Origami is art. What if this art can put science to work in real life?

Researchers from State University of New York-Binghamton have now found a way to turn origami into real batteries that generate electricity!

Turning paper into electricity may seem too good to be true. Indeed, paper is only the fuel, while the real source of power is bacteria. Some bacteria can generate electricity by degrading organic materials. Microbial fuel cells (MFCs) are batteries that take advantage of these bacteria to generate electricity. Since these bacteria can turn any type of biodegradable materials and waste into power, many people have regarded MFCs as an alternative for green energy technology in the future.

However, like many emerging innovations, current MFCs have their limitations. First, manufacturing these fuel cells is not an easy task. In a conventional battery, one needs two points of contact – an anode and a cathode that transport opposite charges to conduct electricity. Moreover, a battery needs a membrane that separates the positive and negative charges generated and a liquid medium for the charges to flow through. Assembling all these parts into a small MFC may require manual production that hampers large-scale manufacturing processes. Second, transporting the organic fuels to feed the bacteria costs power. This reduces the efficiency of the fuel cell. And third, MFCs often need time for bacteria to accumulate and get ready for work. This could take up to several hours or days, which is not practical for these batteries to have real-life applications.

Yet, researchers have now invented the origami-inspired MFC that could solve all of these three obstacles. Researchers have carefully designed the paper with four foldable tabs, which contains the anode, reservoir for charges to flow, membrane that separate charges, and cathode (Figure 1). By folding the paper along pre-defined creases, they have turned it into 3D fuel cells (Figure 2). The anode is simply screen-printed, while the reservoir and membrane are patterned with hydrophobic wax on the paper. A cathode that is made from carbon materials is constructed at the top of the sheet. Figure 2           The origami instructions for folding the 2D paper sheet into a 3D microbial fuel cell.

By folding the carefully designed 2D paper sheet just like making origami, they have built a portable fuel cell. Upon addition of a drop of bacteria-containing liquid, the adsorption by the paper draws these bacteria to the anode and activates the power generation (Figure 3). Figure 3           The MFC is switched on with a drop of bacteria-containing liquid through the inlet in layer (1). The liquid is adsorbed by the paper and bacteria oxidizes organic material in the reservoir layer (2). The process generates electrons, which go to the anode, while positive ions diffuse across the membrane (3) to the cathode (4). This causes charges to flow and generates electricity.

While it still requires further study to improve the efficiency and optimize the performance of the fuel cell, this research has shown a novel and practical solution to current MFC technology. What’s more, this research has fused the art of origami and battery technology together!