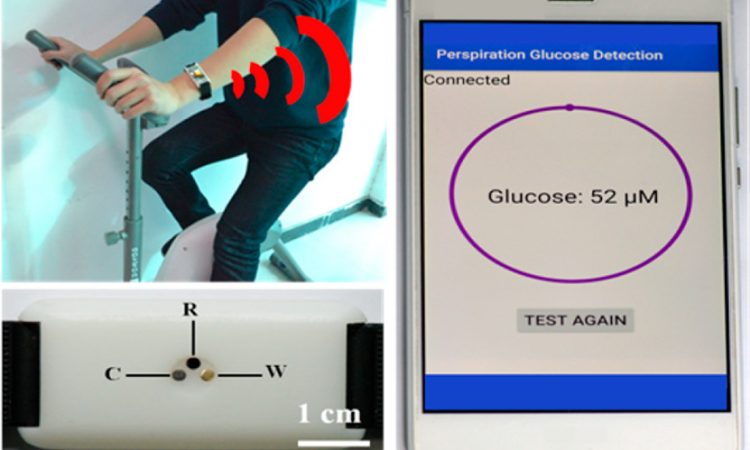 For millions of people around the globe living with diabetes, their lives are constantly influenced by one number: blood sugar level. This number, which measures the concentration of glucose (a simple sugar) in the blood, changes throughout the day depending on what you eat. In people with diabetes, glucose builds up in the blood, causing high blood sugar levels leading to nasty symptoms.

To measure blood sugar, you have to get a sample of blood which is typically done by pricking your finger and using chemical test strips or a handheld instrument to determine the concentration of glucose. However, this is painful and inconvenient, since it has to be done multiple times during the day.

In this paper, researchers have built a wearable device that measures blood sugar without needing blood! Instead, it measures how much glucose is in a person’s sweat, which is related to their blood glucose concentration. By applying an electric current through the sweat, parts of the glucose molecules are oxidized, which produces a current. The strength of this electric current at these specific voltages (0.2 V in this research) can be matched with the concentration of glucose in the sweat.

Scientists have been trying to find ways to measure perspiration glucose for many years. However, one major factor that has stopped them is the low pH required to detect glucose with electrochemistry, which would beirritating on the wearer’s skin.

These researchers solved this by pre-treating the electrodes before they were ever used. They placed the electrodes in a buffer solution and applied a strongly negative electric potential (-2.0 V). This caused the water in solution to break down, releasing hydroxide anions just at the surface of the electrode, making it strongly alkaline (pH 11). Because this reaction is localized to the electrode, the wearer’s skin isn’t affected. This pH caused by pretreatment greatly improved the signal when measuring glucose concentrations (Figure 1). To determine the concentration of glucose, the sensor applies a series of voltages, measuring the current at each step. First, the alkaline environment is created at -2.0 V, then the oxidation of glucose is measured at 0.2 V. Finally, a potential of 1.0 V is applied to clean the surface of the electrode, removing any of the oxidation products of the glucose (Figure 2a). The amount of current produced during the 0.2 V step can be correlated with the concentration of glucose around the electrode, letting the researchers build a calibration curve (Figure 2b).

Figure 2: A) Current measurements as voltage is cycled with different amounts of glucose. B) Sections of graph A with voltage of 0.2 V, showing how the current is dependent on glucose concentration. Inset shows calibration curve of current vs. glucose concentration. Adapted with permission from Zhu, X.; Ju., Y; Chen, J.; Liu, D.; Liu, H. ACS Sens. 2018 3, 1135-1141. Copyright 2018 American Chemical Society.

But in addition to wanting to measure glucose levels, the researchers also needed their sensor to be wearable. To test this, they integrated the sensor into a wristband and had a few volunteers wear it while they exercised. Then the sensor was used to measure the glucose in the volunteers’ sweat, which was compared to HPLC-MS analysis (Figure 3). This showed that their sensor could measure the glucose level accurately compared to other analytical techniques. With a device like the one developed by these researchers, the days of finger pricks may soon be over! A wearable device would let people with diabetes measure the blood sugar throughout the whole day, making it easier than ever to stay on top of their condition. Once this sensor is tested more, it could be developed even further, made smaller, and soon be on the shelf at a store near you!