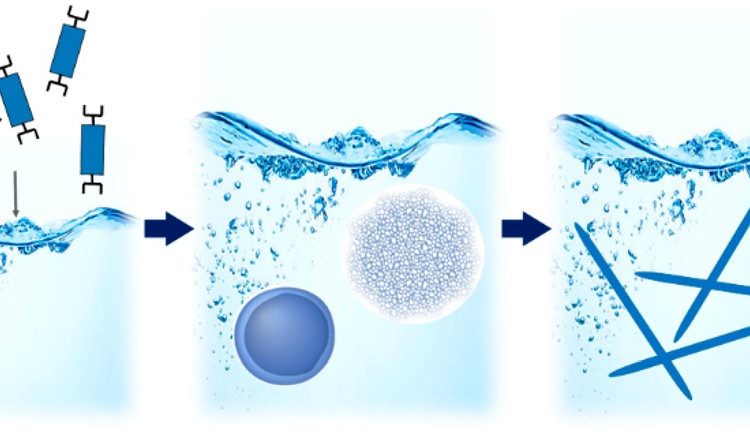 Scientists are often interested in discovering how something goes from a state of disorder to one of order. This drives these researchers to investigate the crystallization of organic molecules out of a liquid.  They take photographs, identify the stages of the crystallization, and study the energetics of the process. These molecules are important as dyes and in electronic devices.

Here, scientists study the crystallization of the class of molecules called perylene diimides (PDIs), an organic dye, in a mixture of water and tetrahydrofuran (THF) which can dissolve the PDIs. Two different versions were studied to compare two processes of crystallization. The crystallization was monitored using electron microscopy imaging (TEM), which takes pictures of individual crystals as the process proceeds, and UV-Vis spectroscopy, to see how the absorbance of light and the color of the solution changes as crystals form.

The first molecule, shown in Figure 1A, forms spherical groups of molecules and then these develop into elongated crystals. The UV-Vis spectrum becomes broader and shows an overall decrease in absorbance as the crystals form out of solution (Figure 1B/C). This is due to fewer dye molecules coloring the solution.

During the initial stage of crystallization images taken using TEM show dented spheres, which indicates that the spheres are hollow and have liquid inside. As the spheres become denser (which can be seen in their distorted shapes), they nucleate, marking the beginning of crystal formation. They begin to have crystalline order with facets, and finally grow into elongated crystals after 24 hours. This process can be seen in Figure 2.

The second molecular structure, the UV-Vis spectrum, and TEM images of the crystallization are shown in Figure 3. This molecule starts with a diffuse phase where the molecules are grouped in amorphous structures. Then elongated structures form out of the amorphous groupings and develop needle-like structures. The initial needle crystals do not have faceting, like the many sides you might observe in a cut diamond. The early crystals also are lacking the full alignment of the molecules that make them up, so they are less ordered than the final state. They also have a density gradient where the interior is much denser than the exterior.

The final crystals are ordered into needles with faceted surfaces. The overall process that occurs during crystallization begins with an amorphous phase. The amorphous phase is described by a large grouping of molecules without any order. Then densification occurs representing nucleation and crystalline order develops. This molecule has more symmetry than the first molecule studied and has a more liquid-like amorphous phase before nucleation.

The overall mechanisms for the first and second molecules are shown in Figure 4. This indicates the difference in crystallization between these two molecules, where one forms aggregates that become denser and eventually grow into elongated crystals, where the other becomes denser and then grows into needle-like crystals seen in Figure 4G.

However, they share similar steps: both involve initial densification, early ordering, and simultaneous changes in order and morphology. This finding is interesting and changes the normally understood crystallization mechanism because it indicates that the crystals change shape and density as they grow.