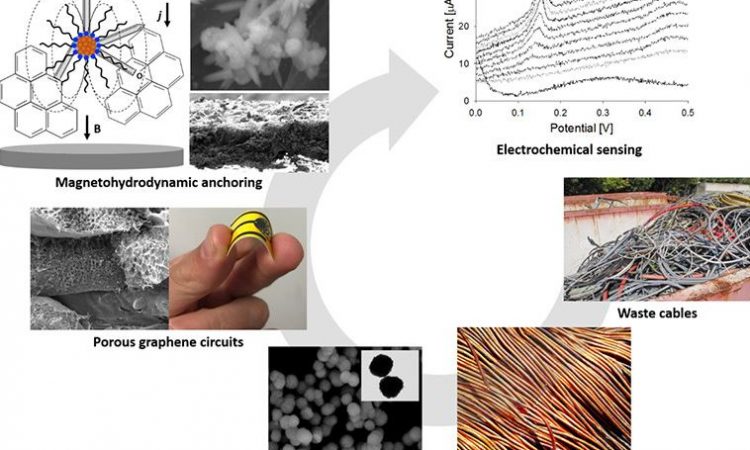 Modern technology is evolving at a mind-blowing rate. We now have handheld devices faster than large-scale computers from merely a decade ago and cable television has been completely replaced by satellite and streaming services. Have you ever stopped to think about what happens to all this obsolete hardware as we move forward to newer, shinier technology? Unfortunately, most of this e-waste (electronic waste) is thrown into landfills because it is not yet economical to recycle the majority of these materials (only 12.5% of e-waste is currently recycled1). Worldwide, we dispose of nearly 50 million metric tons of e-waste per year – that’s the equivalent of 125,000 jumbo jets2! To combat this wastefulness, researchers are striving to develop clever methods for e-waste recycling. Scientists have recently shown that it is possible to disrupt the recycling status quo by using reclaimed electrical cables to build modern electronic sensing devices.

What makes this new method so impactful is that the overall process devised by the researchers is environmentally friendly, cheap, and easy – meaning that it can be applied regardless of local resources. First, recycled electrical cables are stripped of their copper at low temperature using cheap, environmentally-friendly solvents. To transform the copper into nanoparticles, the researchers use what is known as a top-down approach, where larger copper components are chemically broken down and converted into tiny copper oxide nanoparticles (Figure 1). By optimizing the procedure, the researchers were able to produce uniformly sized particles, which is important for maintaining consistency in sensing devices. These nanoparticles can then be anchored onto graphene electrodes to make an electrochemical sensor (Figure 2).

The researchers then showed that these nanoparticle-based sensors can be applied to two major planetary health concerns: environmental pollution and medical diagnostics. For the first, the authors showed that their sensors can be used to detect mercury in water sources. Mercury, especially from mining operations, is linked to ecosystem disruption and can cause major health defects in humans. These health defects can be detected in a variety of ways, one of which is through elevated levels of catecholamines in the urine of patients. To kill two birds with one stone, the authors also showed that the same sensors can be used to detect dopamine, a catecholamine found in urine, through amperometric oxidation. Thus, these sensors could be used to both prevent and diagnose mercury poisoning in parts of the world where it is a major concern.

In summary, the authors created high-tech sensors using low-cost, green materials that can be found and utilized even in resource-limited areas. As the nanomanufacturing industry grows to accommodate the world’s growing population, it will be exciting to monitor the development of other creative ways to cheaply produce state-of-the-art technology!