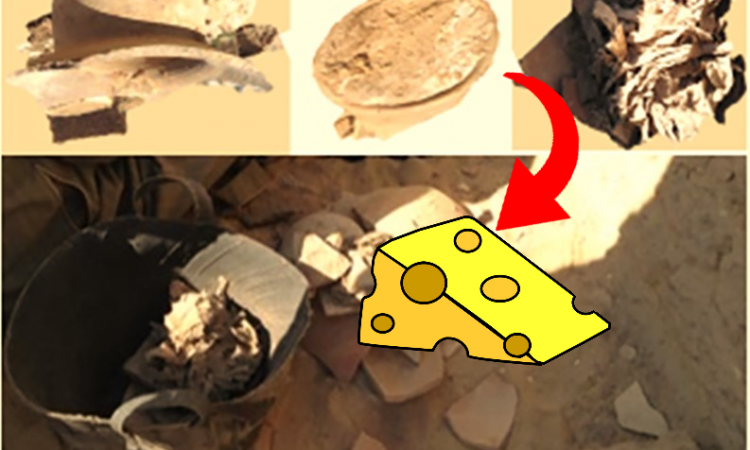 Imagine you’re an archaeologist, uncovering ancient Egyptian tombs, and you come across a white glob of… something. You found it in a broken pot with a piece canvas in what you believe to be a storage room. How do you figure out what the mystery glob is?

Researchers at the University of Catanian and Cairo University faced this very question while exploring the tomb of Ptahmes, mayor of the ancient Egyptian city of Memphis. The mystery sample, shown in Figure 1, was discovered during an excavation in 2013-2014.

The researchers suspected the “solidified whitish mass” was cheese, so they tested it using proteomic analysis.

In this work, the authors used liquid chromatography-mass spectrometry (LC-MS) to analyze the proteome, or all of the contained peptides, of their mystery material. Liquid chromatography separated the protein fragments (known as peptides), and mass spectrometry detected the peptides. The researchers used tandem MS to fragment the peptides even further to sequence the peptides. They then matched the detected peptides  with massive open databases of proteins from various sources, like saliva, bacteria, or milk.

The authors found the peptides from the sample came from about 90 proteins. Most of the proteins were from human contamination, but a few key proteins supported the hypothesis that this sample was, indeed, an “ancient dairy product” (Table 1). Six of the peptides came from the casein family of proteins, which are the most abundant protein in cow’s milk, although the peptide sequences they found matched with cow, sheep, goat, and buffalo. They also found cow milk lysozyme and cow serum albumin, which are often found in the whey fraction of milk.

Table 1. The proteins in the cheese, as identified by the detected peptide, and which animal the peptide likely came from. Adapted with permission from Greco, E., et. al. Analytical Chemistry 2018 90 (16), 9673-9676. Copyright 2018 American Chemical Society.

Overall, the researchers concluded that this cheese (or “cheese-like products”) was made of a combination of cow’s milk and either goat or sheep’s milk. Buffalo likely did not live in ancient Egypt.

The researchers ruled out that this sample was a variation of kefir, a fermented milk drink popular in West Asia, because there were no peptides derived from lactic acid bacteria, which would have been used to ferment the milk.

Finally, the researchers found peptides from Brucella melitensis, a bacterium that can cause brucellosis. Brucellosis is a natural pathogen for sheep and goats and can be transmitted to humans by eating unpasteurized dairy products. This is an interesting characterization of the cheese itself but is also the first direct evidence of Brucellosis in Ancient Egypt (previous researchers had only found indirect evidence in human remains affected by the disease).

This work demonstrates the versatility of analytical strategies like proteomics – not only can we uncover the identity of an ancient cheese, we can also explore the role of food, husbandry, and disease in a 3200-year-old civilization. The discovery of literally ancient cheese is also a friendly reminder: clean out your fridge every once in a while.