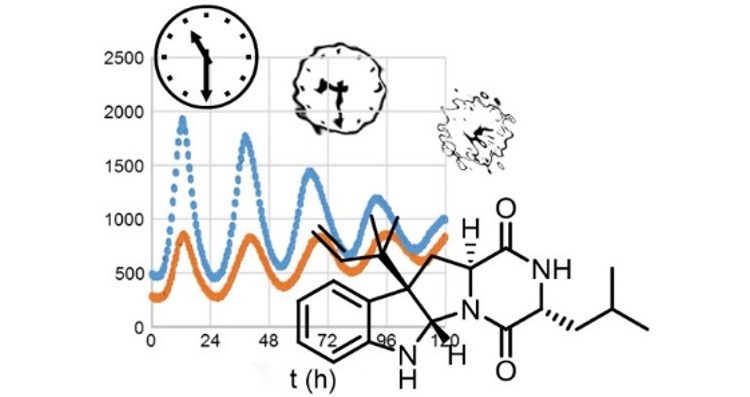 Have you ever heard of a person who seems to wake up at the exact same time every day? Or a flower that only blooms at night? It turns out that most organisms do have an “internal clock” that can affect the timing of processes from sleep to growth. This clock is called a “circadian rhythm” which is a cycle of increased and decreased biological activity that lasts approximately 24 hours and repeats every day. This cycle can be affected by external factors, such as light versus darkness, but the cells in an organism can keep track of this cycle to a fair extent without any external cues at all. Cells do this via increasing the expression of certain circadian genes at the same time every cycle (such as in the morning) and decreasing their expression at other times (such as in the evening). The proteins made from these circadian genes then go on to regulate the expression of other genes in the cell, which then complete jobs such as making new cells for organism growth.

In addition to light, some molecules can also affect an organism’s circadian rhythm. For example, it has been known that compounds called “brevicompanines,” which are produced by the fungus Penicillium brevicompactum, can affect root growth in some plants. It has been thought that these brevicompanines change root growth by altering the plants’ circadian rhythm. To determine whether this is true, the current authors performed some experiments using a plant that is frequently used in research as a model for plants, Arabidopsis thaliana.

Because there are three brevicompanines, BrvA, BrvB, and BrvC, the researchers first sought to characterize the effect of each on Arabidopsis. Past experiments had shown that the brevicompanines increased root growth in lettuce and did not affect rice plants, but when researchers applied each brevicompanine to Arabidopsis, they found that the chemicals inhibited root growth instead! The compounds inhibited both primary growth (length) and secondary growth (density of a cross section) of the root. All three compounds inhibited secondary growth to the same extent, within experimental error, although the trend showed BrvC as having a greatest effect. For primary growth, though, BrvB had the greatest inhibition—from around 24mm root length in the control to less than 5mm with BrvB—whereas BrvC had a much smaller effect, with root lengths around 18mm. Thus, it seems that BrvC is more specific for inhibiting secondary growth instead of primary growth, and BrvB is the most potent.

The researchers then needed to determine the mechanism of action of the brevicompanines; they do inhibit growth, but how? The researchers started by using BrvC in a microarray-based gene expression study which would show whether transcription of any gene in the Arabidopsis genome increased or decreased in the presence of BrvC. For this experiment, all the mRNA transcripts were isolated from the plant samples in the absence or presence of BrvC. This mRNA was then reverse-transcribed into its corresponding DNA strand and washed over the “microarray”: a small chip attached to the complement DNA strands for each known gene in the Arabidopsis genome. A fluorescent probe then gives off light only when a DNA strand meets and binds to its complement. Thus, increased expression of a gene leads to a greater amount of fluorescence seen. The results showed that the expression of “morning clock component genes” (genes that are highly expressed in the morning) were highly downregulated, and evening clock component genes were highly upregulated, in the presence of BrvC.

Like any cycle, circadian rhythm looks a lot like a sine wave, with peaks (high points) and troughs (low points). The height difference between the highest and lowest points are called the “amplitude” of the cycle, and the difference in time between one peak and the next peak is called the “period” and is the duration of one full cycle. To map the effect of BrvB or BrvC on the circadian rhythm itself, the researchers measured the expression of a well-studied circadian marker called GIGANTEA (GI). To do this, they replaced the GI gene itself with the gene for LUCIFERASE (LUC) which codes for a protein that—similarly to fireflies / lightning bugs—emits light. This tricks the cell into increasing or decreasing the expression of LUC as if it were the GI gene because the LUC gene is now next to the GI “promoter” (the DNA sequence that transcription machinery recognizes, determining whether that gene is expressed). This is known as a GI::LUC “reporter gene”.

To make sure changes in light were not affecting the circadian rhythm in their reporter gene experiment, the plants were kept either in darkness (DD) for the duration of the experiment, or in the light (LL). When BrvC was applied to the plants, the amplitude of the circadian cycle decreased. An almost-identical molecule called D-BrvC, which was shown to have no effect on root growth, was used as a control, and D-BrvC had no effect on the circadian rhythm either. When BrvB was applied, not only did the circadian cycle’s amplitude decrease, but the period length also increased. Therefore, gene expression not only varied less at different times of day when BrvB was present, but it also took longer to switch between morning genes and evening genes.

Overall, the brevicompanine family of compounds is just one example of chemicals that can alter plant growth and function by disrupting the plant’s circadian rhythm. So maybe next time your garden doesn’t seem to be growing, check what chemicals might be in the soil or the air…or get your plants a clock!