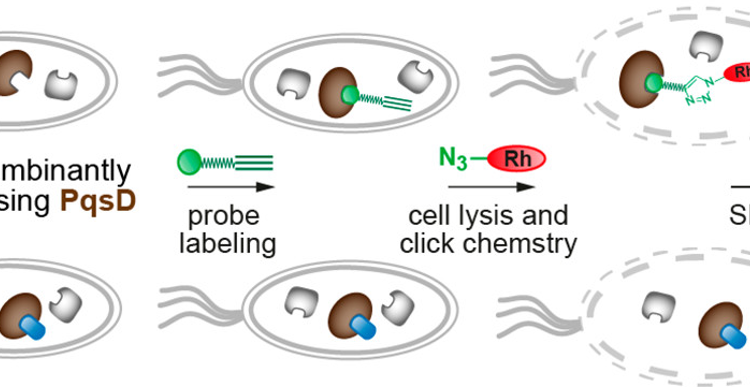 Just as interesting as the detail of how the antibacterial molecules works can be the new methods by which they are discovered. Today’s Chembite is about the development of antibacterial agents in the fight against an infectious bacterium.  It also demonstrates a very interesting and novel way of identifying molecules that may have an antibacterial effect, as we will discuss later in the article.

The infectious bacterium that researchers are fighting against in this work is Pseudomonas aeruginosa. It causes fatal illnesses such as sepsis and displays high levels of resistance to antibiotic treatment. The World Health Organisation lists P. aeruginosa among the pathogens that most urgently require new methods of treatment and therefore it is one of the key targets for new antimicrobials. Many antibacterial agents typically bind to targets (also called receptors) in/on cells and this in some way disrupts the normal biochemical function or replication of the cells.

A particularly important group of molecules in the biochemistry of P. aeruginosa is a family of compounds called quinolones (Figure 1). Quinolones are compounds produced by the bacteria that enable them to grow and thrive, for example by killing off rival species. Quinolones are also signalling molecules, taking part in a process called quorum sensing, in which gene expression in the bacterial cells is regulated by signalling molecules that depend on the density of cells, allowing the bacteria to collectively respond to their cell population density.

The importance of quinolones to the infection pathways of P. aeruginosa makes them a possible target for antimicrobials. The researchers in this paper aimed to find a way of disrupting the pathway P. aeruginosa uses to make quinolones (called the biosynthesis). To do this, they looked for inhibitors of an enzyme called, PqsD, which is a catalyst in one of the steps of quinolone biosynthesis (its substrate is shown in Figure 2). Just like a factory, if any part of the production line breaks down, the whole process is disrupted and no products can be made. If quinolone production can be stopped by inhibiting PqsD, P. aeruginosa will be weaker and slower-growing, and possibly more vulnerable to treatments too.

A typical approach to find an inhibitor might be to produce the target enzyme you want to inhibit (such as PqsD) in a less harmful organism (for example a suitable strain of E. coli) and purify it. Then, you develop a method of testing the activity of the enzyme and add possible inhibitors to see whether any of the inhibitors stop the enzyme from working. Any inhibitors that work can then be further improved by trying structurally similar compounds until eventually you end up with potent enough inhibitors to be possible drugs.

Figure 2: Structures of the PqsD substrate, an intermediate in quinolone synthesis, (left) and the activity-based probe (right), that can each bind to PqsD. In the centre is one of the molecules shown to be an inhibitor in the study – note the structural similarities.  Adapted with permission from Michaela Prothiwa, Felix Englmaier and Thomas Böttcher, J. Am. Chem. Soc., DOI: 10.1021/jacs.8b07629.  Copyright (2018) American Chemical Society.

Instead of expressing and purifying the protein, they simply added the inhibitor to the live E. coli cells. One of advantages of this is that ‘off-target’ interactions (where the inhibitor binds to other cellular targets in preference to the desired target, leading to a lower antibacterial effect) are more likely to be picked up using this new method. With purified protein, there is only one protein for the inhibitor to bind to, whereas in live cells there are many more options, so non-specific binding of inhibitors gets filtered out. The novel method also tests the ability of the inhibitor to cross a cell membrane and might also pick up any metabolism or excretion of the inhibitor. These are all factors that are important when considering how effective an inhibitor is, but they are not accounted for in traditional activity assays.

This is where we come to the novel method of screening the inhibitors. In order to evaluate the performance of PqsD, the activity of PqsD was monitored using a fluorescent probe that also binds to PqsD (Figure 2). The overview of the method is shown in Figure 3. First, the inhibitor was introduced to the cells, then the cells were incubated to express the enzyme. If the inhibitor worked well, it bound to the enzyme active site. Otherwise, the active sites remained free. Then, a probe that binds selectively to the PqsD active site was added to the cells. The stronger the inhibitor, the fewer actives sites will be able to bind to the probe. The cells were then washed to remove excess inhibitor and probe. The protein-boundprobe can then be transformed through an azide-alkyne cycloaddition reaction into a fluorescent species. The fluorescent protein is then purified and the amount of fluorescence can be measured. This indicates the amount of the unreacted probe remains. As a result, researchers can determine the amount of probe bound by the inhibitor.

The results revealed inhibitors similar to the substrate of PqsD could act in a concentration-dependent way (i.e. the more inhibitor, the more inhibition there was!). This is all good, you may be thinking, but these experiments are in E. coli not P. aeruginosa. We are assuming here that E. coli and P. aeruginosa behave comparably.Why not run the experiment in P. aeruginosa,  the pathogen you are actually trying to stop?

Unfortunately, when the team tried to do the experiment in P. aeruginosa, the level of PqsD expressed was not high enough to detect fluorescence when the probe bound to the protein, even when there was no inhibitor. This is precisely the reason why the research team had to use E. coli, where the enzyme can be over-expressed using microbiologicl techniques

The team had to find another way to show the effect of their new inhibitors directly on P. aeruginosa. They used LC-MS (liquid chromatography-mass spectrometry) to monitor the effect of their newly-found inhibitors upon the levels of quinolones produced by P. aeruginosa. The chromatography separates out the quinolone compounds of interest from other small molecules, and then mass spectrometry is used to aid identification of each compound. The results showed that the presence of their inhibitors was associated with much lower levels of quinolones in P. aeruginosa, showing that they are truly affecting quinolone biosynthesis in the deadly target pathogen.

Of course, there is a long way to go for these inhibitor molecules before they reach a clinic, and due to the low success rates in drug discovery it is unlikely they will ever get there. But this novel method for testing new inhibitors of enzymes without first purifying the protein may become the basis for future studies that could produce a live-saving drug.