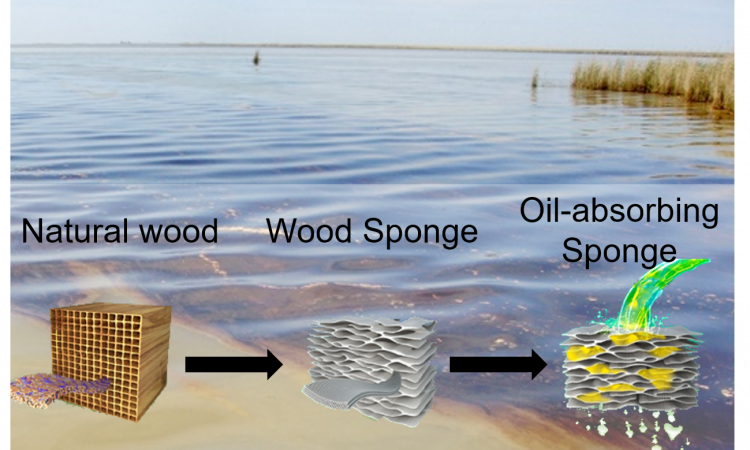 Each year, 1.3 million gallons of oil are spilled into U.S. waters, which has devastating effects on local ecosystems and causes contamination that lasts for years. Finding safe, effective, and earth-friendly methods for cleaning spills is of paramount importance to environmentalists and oil companies alike. Chemists and engineers have competed to created materials that are absorbent, reusable, and robust for decades, but few have matched the use of surfactants and separators in clean-ups. These surfactants and separators tend not to be eco-friendly or made of renewable materials.

One such category of promising materials are sponges, or “aerogels,” made from plant-based material such as cellulose found in plant cell walls. These materials are highly absorbent, and can easily be modified with the addition of oil-loving (oleophilic) chemical groups. Additionally, they are biodegradable and made of renewable resources. However, when these materials are synthesized from the raw materials, the structure tends to be random, making them less efficient and mechanically unstable.

Researchers have recently developed an oil sponge made directly from balsa wood, bypassing many of the pitfalls of bottom-up aerogel synthesis. In a three-step process, the researchers removed lignin and hemicellulose from the wood and functionalized the remaining sponge to be hydrophobic and oleophilic.

First, a block of wood was delignified with a sodium chlorite solution, which removed the dark-colored lignin and left behind only the pure white cellulose structure. The researchers used scanning electron microscopy (SEM) to monitor the cellular structure of the wood (Figure 1a-b). After delignification, the wood retained its honeycomb-like structure, and wasn’t quite springy enough to be a proper sponge. When compressed, the wood didn’t completely recover the way an idea sponge would. Figure 1. SEM images of a balsa wood sponge. (a) Image of the natural wood with no modifications. (b) Image of the wood after delignification. Note the preserved honeycomb-like structure compared to the natural wood, though there are some structural changes on the small scale that make it compressible. (c) Image of the wood sponge after removing the hemicellulose. The structure becomes more columnar than honeycomb-like. Adapted with permission from Guan, H., et. al. ACS Nano 2018, 12, 10, 10365-10373. Copyright 2018 American Chemical Society.

To create a more elastic sponge, the researchers used sodium hydroxide to remove hemicellulose from the structure. Unlike the strong and highly ordered cellulose in wood, hemicellulose is a smaller, weaker sugar that is highly disordered. Removing hemicellulose completely changed the structure of the sponge – instead of a honeycomb, the sponge looked much more like a series of columns, a structure that’s known as “laminar” (Figure 1c). After being compressed, this new sponge sprung right back to its original height (Figure 2).

Finally, the researchers silylized the wood to make it both hydrophobic and oleophilic. Using a technique called chemical vapor deposition, methyltrimethoxysilane (MTMS) was deposited onto the wood and bonded with the cellulose, thus functionalizing the surface.

The researchers tested the sponge to make sure it selectively absorbed oil and could be reused multiple times. Using a red-dyed oil and water mixture, they found that their sponge only absorbed the red oil, leaving perfectly clear water behind (Figure 3). They also reused the sponge 10 times and found its absorbency didn’t suffer after reuse.

The sponge these researchers presented is promising for large-scale and small-scale use in oil clean-up. It’s easy to prepare, effective, resilient, and eco-friendly. And, perhaps most importantly for the Exxons and BPs of the world, balsa wood is extremely cheap. We may still live in a world where oil contaminates our waters every day, but things are looking up on the clean-up end.