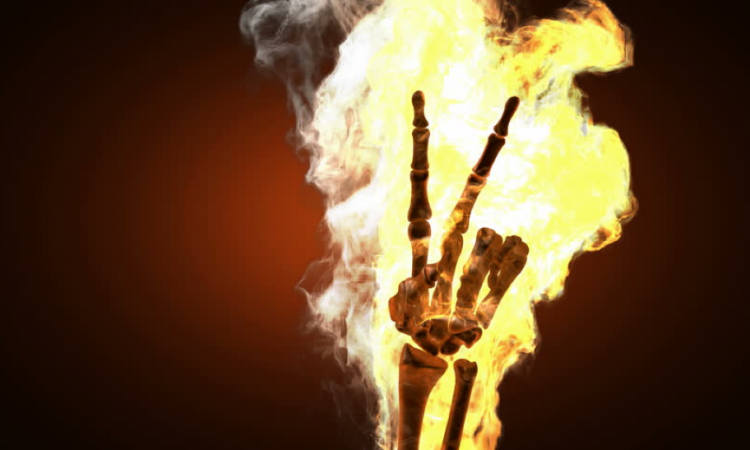 Skeletons tell stories. Their stories narrate their lifestyle, culture, accidents, incidents and are coded in their bones. For years now, biological anthropologists and archaeologists have been studying skeletal remains to understand the past civilizations and human evolution. In addition to their historical significance, the study of bones also helps in present day forensic science. Crime scene investigations derive useful information about nature and severity of crime by examining bones of the deceased. Analytical chemistry has been pivotal in extracting this information and solving mysteries! In other words, chemists know how to reconnect with the dead and unravel their stories. In this article, learn about different levels of coded information present in bones and an analytical method to decipher them.

Let’s begin by trying to understand the various levels of information present in the bones by treating bone as a chemical compound or a chemical material. There are three key factors that define the appearance and properties of a material – its composition, its structure and its shape or size. The first level of information is the shape and size of the bone, which helps the researchers identify where it belongs in the body of the organism. The second level is the examination of its structure using a microscope or X-rays. Just like doctors use X-rays to observe our bones without damaging them, forensic and archaeological experts also use X-rays to non-destructively study skeletal remains. Figure 1 shows X-ray of an Egyptian mummy taken in 2016.

These bones have been studied extensively to understand the structure of mummified bones which helped tremendously in understanding the various steps of mummification process.

The third and final level of information comes from the analysis of  the chemical composition of the bone. Human bone is largely made up of an inorganic component called bioapatite which has a chemical formula Ca10(PO4)6−x(OH)2−y(CO32−)x+y where x and y are variables. Bones are typically around 65% bioapatite, although this alters depending upon the surrounding environment. The bioapatite is usually preserved in fossil bones. The remaining 35% is split into organic  material (25%) and water (10%)  which usually decay  over time or are replaced by minerals in fossils.

This altered chemical composition of bone can be analyzed to obtain significant information about the conditions which the bone has survived. A common agent that affects bones in both archaeological and forensic sites is fire/heat. Studies have shown that heat drastically alters bones in both appearance and composition. The percentage of carbonates (CO32-) and OH– ions  in the bones changes on heating by different degrees depending on heating temperature and duration. A quantitative understanding of these changes could give researches invaluable information about the chain of events. In this Chembite, researchers have studied heat induced changes in bones using Fourier Transform Infrared Spectroscopy (FT-IR).

FTIR is an analytical technique widely used to characterize solids/liquids or gases by probing their interaction with infrared (IR) radiation (light which has wavelength in between 700 nm to 1 mm). The energy of infrared radiation matches the energy required to make molecules vibrate.   The infrared radiation is absorbed by molecules, making them vibrate. Bonds in the molecule stretch and bend in different ways called vibrational modes.  The types and energies of vibrations  are  determined by  a molecule’s structure and atomic composition.

Figure 2 shows different vibrational modes for a water molecule. In a typical FTIR experiment, infrared spectrum shows vibrational bands due to absorption of IR radiation for different vibrational modes. Figure 3 shows the IR spectrum of water with peaks corresponding to different modes formed from the primary modes discussed in Figure 2. The unit in the x axis labelled as wavenumber is proportional to the inverse of wavelength and is commonly used in IR spectrum. Thus, the vibrational bands in the infrared spectrum are characteristic of a bond in a molecule and therefore can be used for compositional analysis in materials.

The researchers in the article studied archaeological burned bone specimens from Monte Sirai necropolis and fossil materials, some of which are shown in Figure 4.

They collected IR spectrum for different bone samples at varying temperatures. Figure 5 shows IR spectrums of human femur bone burned from 400 to 1000°C. The authors have identified and marked the molecular origin of the peaks.

We can see two peaks assigned to amides- amide in water and amide in lipids. Amide is an organic  functional group which is found in the organic component of the bones.

The peak corresponding to amide I gradually decreased in intensity as the heating temperature was increased and disappeared at 700°C. Many of the earlier studies didn’t observe any amide peaks even at 500°C. The authors argue that these observations indicate presence of another contributing variable in addition to the heating temperature for loss of amides. They found that the heating duration is also crucial in determining how bone composition changes. The samples which were heated for longer periods like 2-6h lost amide I at lower temperature whereas the ones burnt for ~ 45 min retained amide peak till ~ 700°C. Using this study the authors make an important comment about the coupling of variables in various investigations which if misinterpreted can lead to false conclusions. The researchers also noticed that the OH vibrational bands appear only after the samples are burnt above 700°C. These also get sharper will increasing temperature from 700°C to 1000°C.

The OH bands show similar behavior in the other bone samples analyzed by the authors indicating that burning has the same effect on the OH moieties in all bones. This gives a robust basis to identify the genuine archaeological remains that have been subject to burning at high temperatures. The phosphates band, on the other hand, was traced back to contamination in the bones. Several kinds of minerals found in rocks or earth can contaminate the bones and show up in infrared spectrum. However, careful analysis of these contaminants could give us information about the geographical location of the remains.

In conclusion, several analytical techniques have helped archaeologists, anthropologists and forensic researches extract crucial information. In addition to the widely used structural characterization, use of vibrational spectroscopy like FTIR has opened ways to access the third level of information coded in the bones. The article discussed here briefly displays the power of FTIR in identifying contamination, effect of heating temperature and also heating duration. Material characterization can often be seen as putting together pieces of a puzzle. One can identify the right piece by several different ways- looking at the corners, matching the print on the piece or by checking out the size and design. All these analytical techniques help us identify the right piece and finally crack the puzzle!