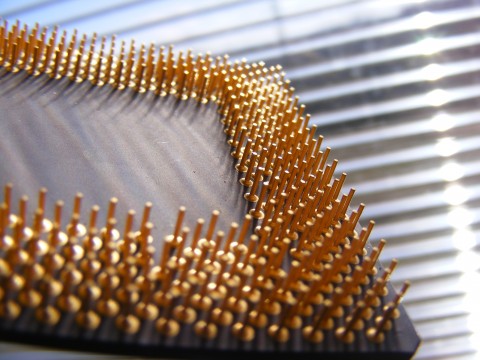 Although many people have gold jewelry and love it for its color and shine, they may not realize that it’s also an important material for nearly all of the electronics we use. Because gold conducts electricity very well and degrades extremely slowly, it is used to coat electrical connections in all kinds of devices. As humans build more and more electronics, we will need more gold to build them. But all the gold ever mined would only fill a cube 65 feet on all sides. We need more gold! Or to find a way to recover gold from old, broken electronics. With this recently published work, these researchers have found an efficient new way to do just that.

To do this, the researchers started with a material known as a metal-organic framework (MOF), which is a complicated structure of organic molecules and metal atoms. These materials are incredibly porous and have a huge internal surface area. Specifically, these scientists worked with Fe-BTC, a MOF containing iron atoms (Figure 1A). They then coated all of the surfaces of this material with various other polymers that are redox active, meaning that they can be reduced or oxidized with other molecules, like gold. The polymer that the researchers found worked best was poly(para-phenylenediamine) (PpPDA). All of this led to the final material, called Fe-BTC/PpPDA, being both extremely porous and sensitive to redox reactions (Figure 1B).

Now that they had the material, the researchers had to determine how well it could extract gold out of aqueous solutions. They started with a simple solution of gold(III) chloride, which contains gold atoms with an oxidation state of +3 (Au3+). When mixed with the MOF, the Au3+ atoms diffused inside the material, where they reacted with amine groups on the redox active polymer and were reduced to metallic gold (Au0), which formed solid particles that were trapped inside the MOF.

After they saw that the MOF could remove gold from a simple solution, they moved onto more complex mixtures. The researchers took a sample of river water, which contains large concentrations of many different metals and organic molecules, and added several different metal ions, including Cu2+, Ni2+, and Au3+ to mimic the solutions made when recycling old electronics. After adding the Fe-BTC/PpPDA, they measured the concentration of all the metal ions and compared it to the concentrations before. They found that not only did the MOF extract 99% of the gold in solution, but it did so after only 2 minutes.

Even more exciting was that the concentration of the other metals didn’t change, only that of the gold (Figure 2A). They could even take the MOF, burn away the organic components, dissolve the iron away, and form solid (nearly 24 karat) gold nuggets. The researchers hypothesized that this specificity is because while the other metal ions can diffuse into the MOF just like the Au3+, only the gold could be reduced to a solid. All the other metal ions simply diffused back into solution.

The Fe-BTC/PpPDA could be used multiple times to remove the gold from different solutions. The MOF was mixed with river water spiked with gold and allowed to soak for 5 minutes, then the water was removed and more spiked water was added. After 10 cycles of this, the MOF could still remove 81% of the gold (Figure 2B). But by treating the material with ascorbic acid, the amine groups on the polymer were regenerated and could react all over again. This series of extractions and regenerations could be repeated multiple times, going until the MOF is totally full.

Finally, the researchers tested the performance of the MOF using different, real-world sources of gold waste. They started with extracting gold from real recycled electronics, first dissolving the gold off of old computer parts with a leaching solution (Figure 3A) and then using the MOF on the leaching solution with the gold dissolved in it. The Fe-BTC/PpPDA was able to remove 86% of the gold in two minutes, increasing to 95% after just 30 minutes (Figure 3B). After this, the scientists tested other sources of gold, including city wastewater, sewage, and even seawater (each spiked with a small amount of Au3+). In each case except the sewage, over 90% of the gold was extracted in less than 20 minutes. The gold in the sewage was 61% recovered in 2 minutes and 90% in 24 hours.

This new material could be used to recover huge amounts of gold from sources that were previously thought to be nearly worthless. Old, discarded electronics could be used as the starting materials to create new, exciting devices. So, the next time you pick up your phone, take a second to think of the valuable gold inside it and what could happen to it when you recycle it.