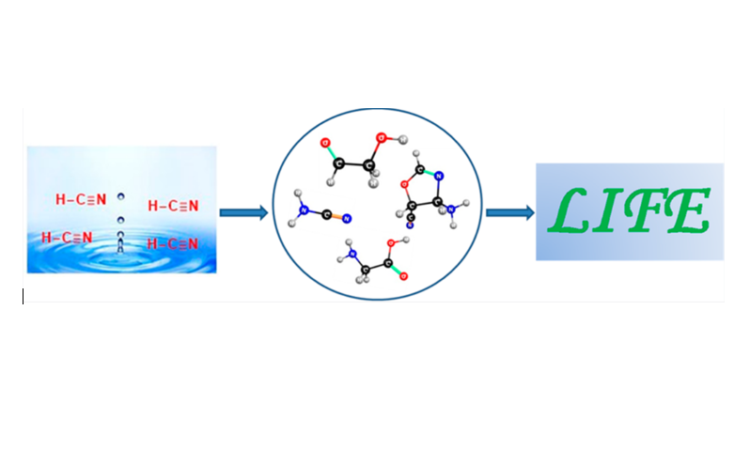 Humans have always been curious as to where we came from and how life originated on Earth. Chemists investigate this problem by trying to understand what simple molecules might have been present and have reacted to create the building blocks for life. This study has discovered a pathway that these building blocks could have been formed from just two molecules, water and hydrogen cyanide (HCN).

The most widely accepted hypothesis for the start of life is the called “RNA World” where life began with ribonucleic acid (RNA), which is structurally similar to DNA, replicates itself, and creates proteins that perform cellular functions. This hypothesis is the most widely accepted because hydrogen cyanide was known to exist on Earth before life and can lead to RNA and other proteins through well-understood synthetic routes. However, Earth was likely very hazy and most HCN was dissolved in the ocean so the typical chemical pathways to activate HCN, through reactions with sunlight, would not have occurred. It is more likely that these reactions would have had to happen in water at higher temperatures than present day conditions.  Researchers in this study used ab initio nanoreactor calculations to determine possible reaction pathways and products. These calculations allow researchers to discover new reactions by inputting HCN and water into the system and allowing it to simulate reactions under certain temperature and acidity conditions. The evolution of the system over time can be seen in Figure 1.

Over the course of the simulation, researchers found that the precursor molecules to the formation of RNA were created through simple reactions of water and HCN. These molecules that were formed include cyanamide, glycolaldehyde, oxazole derivative, and the amino acid glycine. Researchers also calculated many other parameters of these chemical reactions including the activation barriers and the free energy of the reaction. They found that instead of reducing species, the system favored chemical reactions with lower energy barriers and that the low barriers to reactions were due to the fact that most of the species were in low valent states. They also found that water or NH3 molecules acted as proton shuttle which has been shown in other biologic studies.

This research is exciting because it has shown that two simple molecules could have been enough to lead to RNA and proteins which are the building blocks of life. Researchers here also discovered new reaction pathways and calculated barriers of these reactions which will allow for further computational studies of the chemistry that led to life.