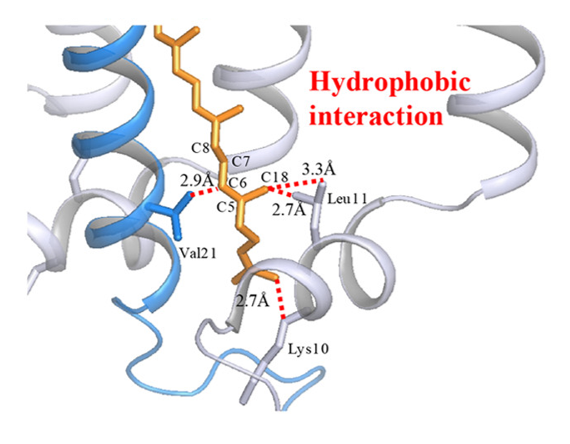 If you’ve ever heard of species of bacteria that can live in hot springs, you may have wondered, how can some bacteria survive high temperature environments? To sustain life in high temperatures, some bacteria have evolved strategies to increase the thermal stability of their cellular components. Temperature is a measure of thermal motion at a molecular level, so a higher temperature means that the molecules involved have more kinetic energy and more motion, which can sometimes break up cellular structures. Denaturation is the process by which macromolecules in the cell, such as proteins, lose their organized, three-dimensional structure. Protein denaturation can easily be seen in the kitchen when cooking an egg, as the egg becomes solid and opaque when left on the hot stove. Proteins—structured polypeptide chains made of amino acid building blocks—are vital to cell survival as they play both structural and diverse functional roles in the cell.

The purple bacterial species Blastochloris tepida is a moderate thermophile (organism able to survive at high temperatures), which can be found in hot springs, lives optimally at 42ᵒC (107.6ᵒF), and can live in environments up to 47ᵒC (116.6ᵒF). Blastochloris species of bacteria are photosynthetic, so light-harvesting complexes are vital for survival. They contain huge protein complexes called Light-Harvesting 1 Reaction Center (LH1-RC) core complexes that in turn contain pigment molecules—which absorb light to be converted into energy for the cell—including bacteriochlorophyll b and carotenoids (Fig. 1). In a recent study, the scientists Seto and co-workers set out to determine how B. tepida LH1-RC is stabilized by comparing it to the LH1-RC of Blastochloris viridis, its mesophilic (non-thermophilic) relative.

In general, proteins derive their three-dimensional structure—and therefore functional ability—from the forces between charged or polar amino acids (like ionic bonds and hydrogen bonds) as well as hydrophobic interactions where nonpolar amino acids tends to aggregate together, away from polar water molecules. However, these forces alone are not enough to withstand the high temperatures where B. tepida lives. Instead, the researchers had to search for other molecular species that may be involved in the huge LH1-RC complex.

To do this, the scientists first had to isolate the B. tepida and B. viridis LH1-RC complexes by growing the bacteria, breaking open the cells, and using differential centrifugation to separate cellular components based on mass. The scientists then compared spectroscopic data between LH1-RC complexes of the two species, both initially and over time when incubated at 55ᵒC. Circular dichroism (CD) spectroscopy shows characteristic spectra for the different structural elements in proteins, like alpha-helices and beta-sheets. In protein denaturation, these structural elements unfold and become unstructured and flexible. Therefore, CD can be used to “watch” a protein unfold at high temperatures, and the scientists did see increased denaturation in the B. viridis LH1-RC as compared to B. tepida (Fig. 2).

Table 1. Composition and number of carotenoids in both Blastochloris species.

Understanding why some proteins are stable at high temperatures not only gives us the interesting information of why some species are able to live at high temperatures, but it can also be vital to using proteins for engineering applications outside of bacterial cells. Isolated protein enzymes can be used to replicate DNA or synthesize drug molecules in the laboratory, but the ease with which proteins can be denatured by heat makes proteins from thermophilic species preferable for industrial settings. And in this case, the stability is shown to be caused not by the protein itself but by the pigments held within.