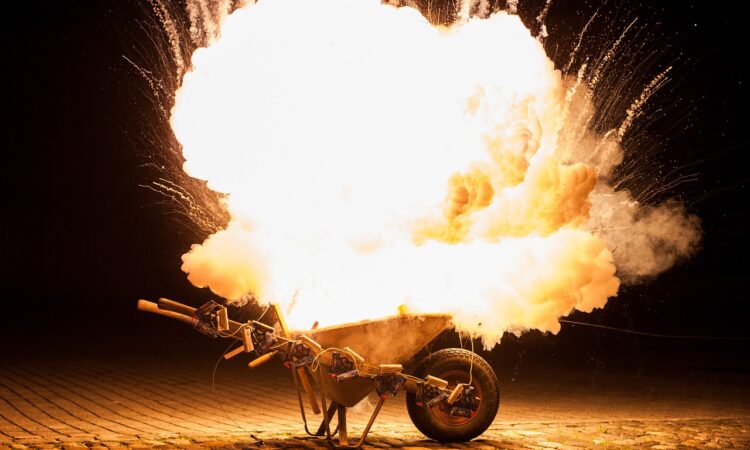 Humankind has been making use of fuels that tend to release harmful by-products to the environment. Indeed, many of these fuels have been banned due to their devastating effect on the environment. Hence, there is a need to develop a new generation of greener and more sustainable fuels.

The design of high energy density materials is of great interest for different applications including explosives, propellants, and pyrotechnics. These types of fuels tend to exist in the solid-state where materials can densely pack and store more energetic content compared to their liquid and gas counterparts (e.g. wood vs. gasoline or hydrogen gas). Hypergolic materials are an important group of high energy density fuels that ignite upon contact with an oxidizer. This is of particular interest for spacecraft propellant systems because these fuels can be ignited in the absence of oxygen gas. However, most of these fuels contain toxic components such as hydrazine, creating environmental concerns.

In the quest to look for greener hypergolic materials in both their processing and content, Titi and co-workers developed a hypergolic metal-organic framework (MOF) employing cleaner and safer components. MOFs are a class of porous materials composed of metal ions linked through organic ligands (Figure 1). They can arrange in three-dimensional crystalline structures forming long-range order networks and have been used for water purification, energy storage, and catalysis. Nonetheless, their hypergolic properties were unexplored until this group of researchers decided to carefully engineer a clean linker that could trigger the ignition of a type of MOF called zeolitic imidazole framework (ZIF).

The ZIF design started with the choice of linker, an imidazole derivative (Figure 2). This linker was functionalized by acetylene and vinyl groups that promote the hypergolic behaviour in the ZIF by being easily ignitable. The linker was then separately mixed with various metal salts of Zn2+, Co2+, and Cd2+ to evaluate how the electronic properties of the generated ZIFs can change their hypergolic properties. Remarkably, these ZIFs can be synthesized through mechanochemical routes, being a significant advance towards achieving greener material processing. Mechanochemistry induces chemical reactions using mechanical energy, usually at room temperature. In this work, the linkers and metal salts are placed in a ball mill, in the presence of a small amount of liquid additive to lubricate the precursors and a salt catalyst to promote the formation of products. Then, the mechanical energy takes care of the rest. An analogous procedure that might be familiar to you is the preparation of a mojito. A crucial step in its recipe is the crushing and grinding of mint leaves, lime wedges, and sugar (the precursors) to which you add a small amount of rum (the lubricant) to create a delicious fuel (the ZIF).

The ZIFs are characterized through standard techniques to evaluate their nature, crystallinity, and thermal stability. One of these techniques is of particular importance: powder X-ray diffraction (PXRD). PXRD takes advantage of the diffraction of light (X-rays) by the symmetrically arranged atoms present in the material to create a unique pattern for each sample. A PXRD diffractogram can be seen in Figure 3 (red trace), confirming the nature of the Zn(Alm)2 ZIF.

A drop test was conducted to evaluate the hypergolic properties of the different ZIFs synthesized. For this test, a drop of a liquid oxidizer is released on each of the ZIFs to initiate the ignition. Concentrated nitric acid was used as an oxidizer, which is typically implemented in propellant systems. The highest hypergolic properties were observed for the ZIFs made from Zn2+, Co2+, and Cd2+ in combination with the acetylene-functionalized imidazole ligand (Alm). The ignition delays were remarkably short (< 5 ms) with the emergence of flames in the order of 4 to 6 cm in height. Check out the video of the reaction below! Control reactions were also performed to investigate the hypergolic properties of the precursors. However, none of these experiments resulted in a significant ignition, confirming that the hypergolic behaviour is intrinsic to the ZIFs.

The results presented by Titi and co-workers demonstrate the flexibility of MOFs through modifying metal ions and linkers. The ability to tailor hypergolic properties such as ignition delay, flame colour, and duration in MOFs will expand their applications in solid fuels to pyrotechnics. Furthermore, these materials were synthesized using greener procedures and less toxic precursors compared to other widely used—and highly toxic—hydrazine derivatives, rendering MOFs a sustainable alternative to commonly used solid-state fuels. These results pave the way to a new avenue of high energy density applications in MOF-based research.