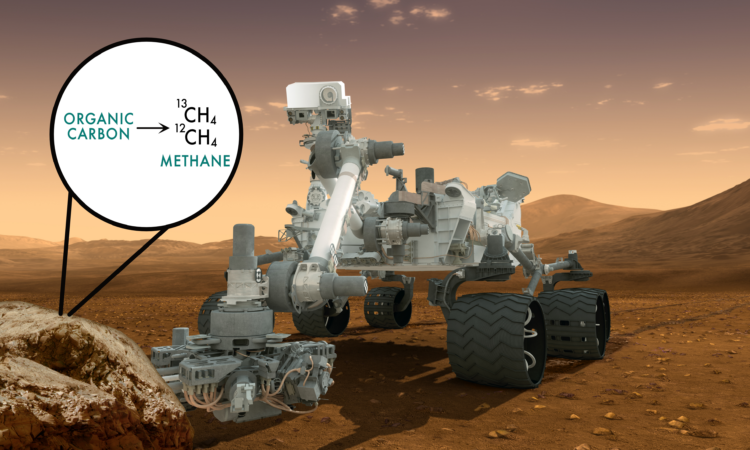 Organic carbon is the glue of life, but this isn’t the same “organic” you see labelled in grocery store aisles. Environmental scientists use the word “organic” to describe molecules that build cells. For example, diamonds, pencil graphite, and the CO2 in our atmosphere are all carbon-based but they are inorganic. Making organic carbon is challenging; however, there are several ways to create it from inorganic CO2. We are most familiar with photosynthesis, which uses energy from sunlight, but this transformation can also occur without the assistance of life. Abiotic reactions – those that do not involve biology – can convert CO2 to organic carbon as well. Thus the presence of organic carbon on other planets, like Mars, does not mean extraterrestrial life created it, but it does warrant experiments that will determine whether the organic carbon came from cellular life or some complex chemistry. On Mars, these experiments have been on-going for years, and just this month, House et al. released a ten-year experiment from the Curiosity rover that has broadened our perspective on the origin of Martian organic carbon.

Since it landed in 2011, Curiosity has focused on understanding what molecules compose the organic carbon on Mars. As part of this mission, NASA designed a creative method to measure its carbon stable isotope composition. Importantly, carbon isotopes (13C and 12C) can distinguish formation mechanisms of organic carbon. These measurements are routine on Earth and have led to many discoveries about how the Earth’s climate has changed over time. (For an in-depth discussion of stable isotopes, see my previous article in Chembites.) However, performing isotopic analyses on Mars with only a rover is… complicated.

Here’s how NASA did it: Curiosity placed a rock sample in its Evolved Gas Analyzer (EGA), which slowly heats up to 800°C, turning all the organic carbon into CO2 or methane. At a designated temperature, Curiosity shuttled gas from the EGA to the tunable laser spectrometer (TLS). The TLS uses a specialized laser to quantify the isotopic forms of methane (12CH4 and 13CH4) and calculate its carbon isotope composition (Figure 1). Since the EGA methane came from Martian rocks, it represents the carbon isotope composition of Martian organic carbon and should provide information to constrain our models of Mars’s ancient climate.

Curiosity performed this experiment on over twenty rocks, ranging from sand to mudstone. Despite the range in rock type, the trapped organic carbon was consistently depleted in 13C (Figure 2). Initially this was exciting because biological reactions tend to leave their products depleted in 13C. For example, plant cells have ~2% (-20‰) less 13C than CO2 in the atmosphere. However, the authors of this study believe that the organics on Mars are too 13C-depleted to be direct products of life. They came up with three major hypotheses to explain their data.

1.) Mars flew into a cloud of galactic space dust.

Yes, you read that right. The Milky Way galaxy is full of dust storms carrying small organic molecules that can accumulate on planetary surfaces over many years. Notably, those molecules have extremely small amounts of 13C in them. It’s possible that Mars (and the rest of the solar system) flew through one of these galactic dust storms, littering the surface with 13C-depleted organic carbon, which Curiosity is now measuring.

Mars is farther than Earth from the Sun, but over geologic time, solar radiation could have created organic molecules from CO2 in the Martian atmosphere. One problem with this hypothesis is that those organics molecules can also react with sunlight and would quickly be removed from the atmosphere before depositing on the surface. However, photochemical reactions in the upper atmosphere are known to have large biases against 13C so the resulting organics would be extremely 13C-depleted, matching Curiosity’s results.

3.) Microorganisms created methane that was then converted to organic molecules by sunlight.

Microbes can produce methane from CO2, creating the most 13C-depleted biological carbon on Earth. While this process alone could not generate organics that match the carbon isotope compositions measured on Mars, this isotopic signature could be formed if, millions of years ago, microbial methane reacted with sunlight as described above, the resulting buried organics would be as 13C-depleted as the organic carbon measured by Curiosity.

Any one of these scenarios (Figure 3) could lead to the organic carbon on Mars being 13C-depleted and more explanations could still emerge. Despite their inconclusive results, the authors made a significant contribution to our understanding of Mars’s history by ruling out many otherwise plausible scenarios for generating the organics on Mars. From now on, hypotheses of how Mars cooked up its organic carbon will have to explain its extremely 13C-depleted composition. Without a doubt, Mars’s history will become clearer using the new Perseverance rover, which landed at Jezero Crater in 2021. If Perserverance is anything like Curiosity, we will be writing about its findings well into the 2030s.