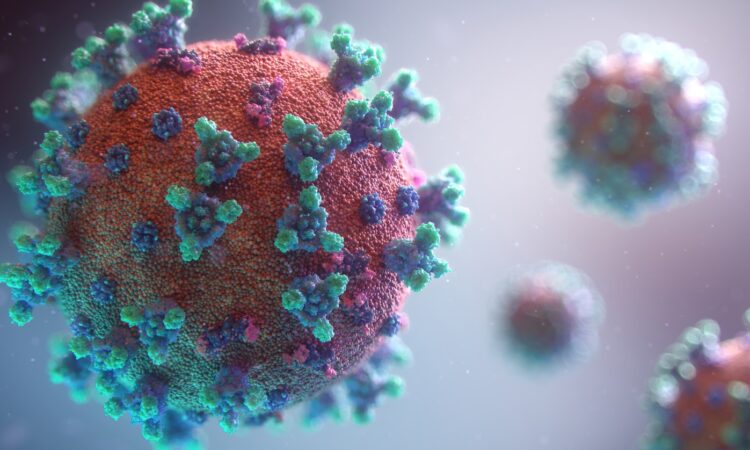 Further permissions related to sharing and distributing the following material should be directed to the ACS.

Natural products encompass any compound that is produced by a living organism, such as a plant or bacteria. Because of their unique structural qualities as well as their inherent diversity, natural products and their derivatives have great potential as a source for new drugs. Not only do natural products currently make up one third of FDA approved small molecule-based drugs, but they have a much greater potential for bioactivity.1 Only 0.025% of synthetic compounds are currently in use as pharmaceuticals, compared to a whopping 0.3% of natural products.2 Because of this, natural products are an obvious choice when considering new drug sources.

To understand how natural products could work as targets for the SARS-CoV-2 virus, let’s look at the virus structure. The virus contains four main structural proteins, including the spike protein, which we will discuss in depth today and resides on the surface of the virus, as well as envelope, membrane, and nucleocapsid proteins. The spike protein binds to the human cell surface receptor ACE2, making it critical for cell infection. Because of this, the spike protein is an excellent target for drug development to prevent infection by SARS-CoV-2. The spike protein has three subunits with different functions: the S1 subunit is responsible for binding to ACE2, the S2 subunit mediates fusion of the virus with the host cell, and a transmembrane domain which attaches the whole spike protein to the virus particle.3 For SARS-CoV-2 infection to occur, the S1 subunit must successfully bind to ACE2; thus, if binding of the S1 subunit to ACE2 is prevented by an inhibitor which binds to the spike protein, infection is avoided. With their complex and variable structures, but higher availability than synthetically sourced compounds due to bioengineering of natural product producers which are incredibly efficient and selective, natural products are a promising source of potential viral inhibitors. Thus, libraries of known natural products are an excellent source for high-throughput screening of viral inhibitors.

Breeman et al.4 use a technique called affinity selection-mass spectrometry to screen hemp extracts from Cannabis sativa for compounds which bind to the SARS-CoV-2 spike protein. In this technique, the receptor of interest (in this case, the spike protein) is first attached to a magnetic microbead. This magnet-receptor complex is then incubated with various hemp extracts; bound compounds will attach to the magnet-receptor complex, while unbound compounds remain in solution as they are not magnetized by the microbead (Figure 1). Bound ligands are then detached from the magnet-receptor complex by adding solvent and identified via mass spectrometry. This produced three hits from the hemp extracts: cannabigerolic acid (CBGA), cannabidiolic acid (CBDA) and Δ9-tetrahydrocannabinolic acid (THCA-A), confirming that each of these compounds were able to bind to the spike protein.

Naturally, the important question remains: does binding of these cannabinoid acids decrease or even prevent infection by SARS-CoV-2? To answer this, viral infection assays were carried out by incubating the live virus with either CBGA, CBDA, or DMSO as a negative control before infecting mammalian cells. Because THCA-A is considered a controlled substance, it could not be obtained in high enough quantities for the assays. At 24 hours post-infection, the cells were stained with a dye that binds specifically to viral RNA to visualize the amount of viral RNA in the cells (Figure 2). This revealed a large decrease in viral RNA between the negative control cells and the cells with virus particles that were incubated with CBGA and CBDA, supporting that the cannabinoid acids prevent infection by the SARS-CoV-2 virus. To quantify the IC50, or the concentration of ligand required to inhibit 50% of the virus activity, focus forming assays were performed in which the virus is incubated with different concentrations of CBGA and CBDA before cell infection. The number of infected cells is then quantified through binding of an antibody with specificity to the SARS-CoV-2 virus, leading to a change in fluorescence depending on the concentration of virus present (Figure 3). Most significantly, this assay shows that CBGA and CBDA have similar inhibitory effects against the original, alpha, and beta variants of SARS-CoV-2. Because the virus mutates rapidly, this is very encouraging, as the cannabinoids could be used as a line of defense for multiple variants and may be effective against future variants as well.

Ultimately, the authors show that both CBGA and CBDA could act as potent inhibitors of SARS-CoV-2 infection. While they note that the IC50s of the cannabinoids are high, they propose that it is still potentially clinically achievable, suggesting that paired with other defenses such as vaccination, these cannabinoids are a great opportunity for continued treatment of SARS-CoV-2.