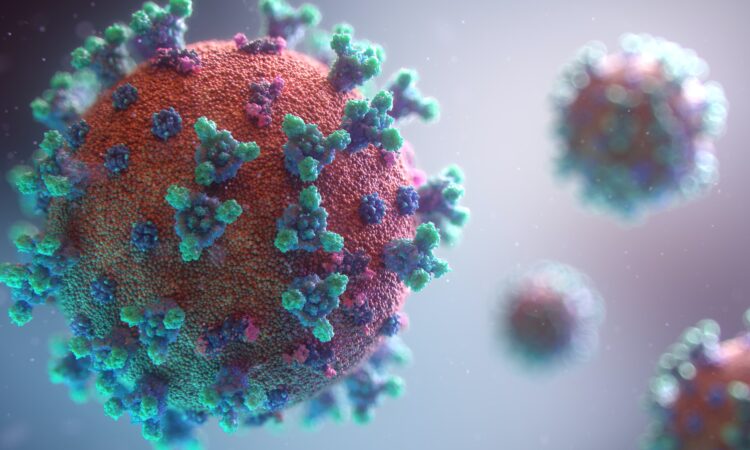 Journal: Journal of the Academy of Chemical Sciences

SARS-CoV-2 attaches to human cells and initiates infection by binding its spike protein to ACE2 receptors that are highly expressed in the surface of cells of the respiratory system (Figure 1). This interaction was discovered at the beginning of the COVID-19 pandemic, but there are still details about how the virus initiates infection that remain unclear. Notably, ACE2 is expressed at very low levels throughout most human cells, while COVID-19 can affect multiple organ systems. Could other receptors interact with the spike protein and facilitate the infection of cells outside the respiratory system?

To answer this question, Suzuki et al. used proximity labeling, a strategy in which molecules close to a protein of interest are tagged with a chemical label. This label facilitates the purification and identification of molecules that interact with the protein of interest, which can be important for deconvoluting the mechanism of action of a biological process. They used a novel proximity labeling technique called µMap, in which the protein of interest is conjugated with an iridium catalyst molecule and is incubated with a biotin-diazirene compound (Figure 2). When irradiated with blue light, this molecule can catalyze a reaction in which the biotin-diazirene releases an N2 molecule and leaves behind a biotin-carbene. The carbene’s lone pair quickly undergoes an insertion with nearby C-H bonds, thus forming a covalent bond between biotin and nearby organic molecules. These molecules can be isolated by using streptavidin, which forms a strong interaction with biotin, and then be identified through mass spectrometry-based techniques.

To identify novel receptors that interact with SARS-CoV-2, they incubated iridium catalyst tagged spike protein with human lung cells and carried out the µMap technique (Figure 3). After isolation using streptavidin and mass spectrometry, they identified 8 receptors that had been tagged through proximity labeling.

Almost three years have passed since the discovery of COVID-19, but there are still aspects of SARS-CoV-2 infection that remain to be uncovered. This study illustrates the power of using proximity labeling techniques; identifying proteins that interact with each other can further our understanding of the mechanism of a viral disease that has changed the world in the last few years.