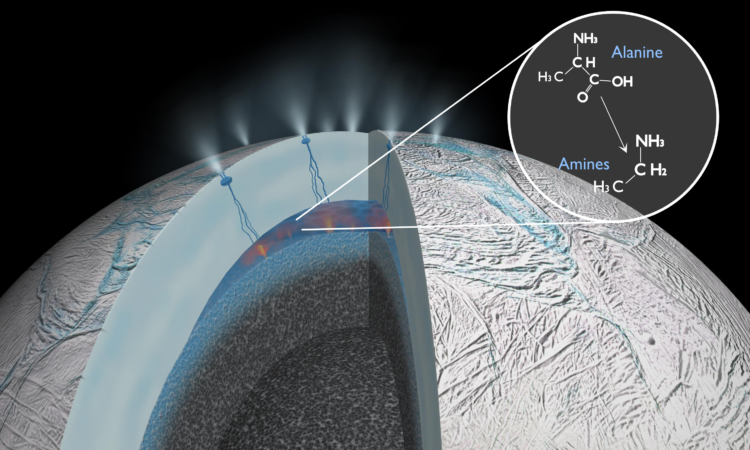 Organic molecules are the building blocks of life and they seem to appear in every corner of the solar system. This may not come as a shock since we are surrounded by organics every day here on Earth. Assisted by catalytic enzymes, cells are expert organic chemists that have covered the Earth in organics. Space is a different story. The origin of extraterrestrial organic molecules remains a mystery. What processes in the vacuum of space could lead to chemicals that are made by our own cells? One clue comes in the form of meteorites. Harboring almost every amino acid required for life (and many more), meteorites continually impress scientists with their diverse and abundant organic molecules. The motivation to investigate the chemical origins of extraterrestrial organics is two-fold: 1.) To understand if the same prebiotic chemistry could have jumpstarted life on Earth and 2.) To predict if this chemistry could be fueling life on other planets or moons in our Solar System. The latter motivation was of particular interest to Li et al., the authors of this recent study on extraterrestrial amino acid chemistry that may be relevant for the icy moons around Jupiter and Saturn.

There are twenty amino acids (Figure 1) that are essential for life; every cell on Earth has them. Before cells were around to synthesize them, where did amino acids come from? One theory is that they were abiotically – “without life” – synthesized from interactions between water and rock. Born outside the Earth’s atmosphere, any amino acids found on meteorites must have originated from these abiotic reactions. They are a priceless relic of primordial chemistry. Scientists have long attempted to replicate these reactions in the lab, and while they can create a diverse range of amino acids, the pattern of amino acid abundances does not align with what has been found on meteorites. Based on laboratory reactions, the concentration of amino acids should be higher on meteorites that have evidence of water-rock interactions, but water-altered meteorites actually have fewer amino acids. This is known as the “water paradox”. Thinking outside the box, Li et al. hypothesized that amino acids were not only created by water-rock reactions but destroyed by them as well.

Geoelectrochemistry (“rock”, “electrical”, “chemistry”) refers to chemical reactions that are driven by natural gradients of electrochemical potential across a geological environment. Just as batteries have two sides  – positive and negative – so too can certain environments. For example, Li et al. propose that on an icy moon of Saturn (Enceladus), water/rock interactions at the moon’s core produce an electron-rich environment. Above this core is a large ocean (buried under the moon’s icy crust). Filled with chemicals that absorb electrons, Enceladus’s subsurface ocean is thought to be an electron-poor environment. At the interface between the core and ocean, geoelectrochemical reactions could occur, not dissimilarly to how the battery in your remote control works. Li et al. hypothesized that amino acids were being made via water-rock interactions in the core and then degraded into smaller molecules by this geoelectrochemistry (Figure 2).

Li et al. tested their hypothesis by exposing three amino acids (alanine, valine, and glycine – red in Figure 1) to a battery that simulated the possible reactions on Enceladus (Figure 3). Other than electrochemical energy, the only addition was a catalyst – iron sulfide (FeS) or nickel sulfide (NiS) – which occurs naturally and helps reactions proceed. Many different molecules, some unidentifiable, started accumulating in the reaction mixture (Figure 4B). They found carboxylic acids, amines, and hydroxyacids, all of which are found in different proportions on meteorites. As they turned up the power of the battery (left to right, Figure 4A), the concentration and ratios of these products changed. Amino acids were being transformed into new organic molecules. These experiments suggest that geoelectrochemical amino acid degradation could explain both the low concentration of amino acids on meteorites and the diverse suite of other organic molecules harbored on them (Figure 4B).

To test this hypothesis on icy moons like Enceladus, we need to measure their indigenous organic molecules. Flying through the erupting plumes of ice on Enceladus in 2015, the Cassini spacecraft detected organic molecules similar those found on meteorites. However, we need much more detailed analyses to understand if geoelectrochemistry is powering prebiotic reactions inside the moon. These future experiments could prove another plausible mechanism of creating organic molecules abiotically. The same geoelectrochemical reactions may even have been important in fueling the earliest forms of life on Earth.