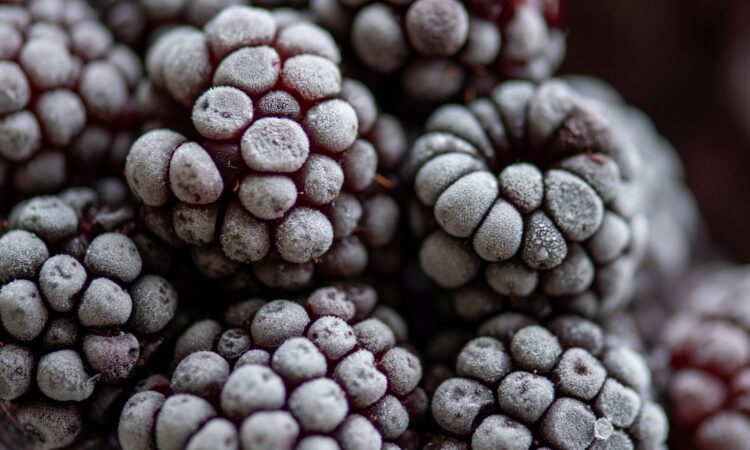 In the agricultural industry, techniques for food preservation are critical for maintaining food quality and structural integrity. Cryopreservation is one such technique that is used to maintain food quality. Cryopreservation or specifically, cryogenic freezing involves the use of cryogens such as liquid nitrogen to freeze food products. This allows industries to preserve the freshness, quality and safety of their foods while minimizing costs for food maintenance.

While cryogenic freezing is a common and effective technique, it is limited by presence of ice crystal formation which lowers quality of frozen food.  Quick-freezing food at cryogenic temperatures ensures that smaller, more evenly distributed ice crystals form which improves the quality and taste of frozen food products. Though the impact of ice crystals can be mitigated during the cryogenic freezing process, ice formation is still a significant threat to food quality during low temperature transportation of the frozen products. Anti-freeze peptides are one way to address this problem.

Anti-freeze peptides are implemented during the transportation process to protect food from sub-zero environments by reducing the freezing point of solution without greatly affecting the melting point. This is known as thermal hysteresis. In terms of ice crystal formation, the antifreeze peptides manage and restrict ice formation that can severely damage foods.

The development of anti-freeze proteins and peptides  are critical for the food industry to protect and maintain not just foods but other organisms as well. There is growing interest in these developments as the anti-freeze peptides are effective anti-freeze agents, have stable properties and low productions costs.

To evaluate the structure and overall molecular mechanisms of action, molecular docking simulations and other traditional techniques modelled how the anti-freeze peptides interacted with ice crystals. The authors stated that there are no current methods to study the molecular mechanisms between antifreeze peptides and ice crystals, however molecular simulation-based research has generated a lot of interest. The authors utilized molecular docking which looks at the interactions of molecules using computer technology (e.g. simulations, programming) and statistics.

Yang and colleagues modelled the three novel antifreeze peptide sequences with a prediction modeling program and investigated the interaction of the sequences and ice crystals through molecular docking. This allowed them to determine the final configuration of the interactions between the antifreeze peptides with ice crystals (Figure 2). The main take away from this figure is that it looks at the binding energy of peptides with ice crystals, where the authors evaluated the binding total energy of the system, which provides an indication on binding stability. The greater the absolute value of total energy, the more stable the binding. The study demonstrates that EG-10 peptide had best cryoprotective effect because it has lower absolute total energy, and fewer hydrogen bonds and nonbond interactions with ice crystals. The study argues that this may be attributed to the unique α-helix structure of EG-10 (unlike the other 2 peptides), that provide greater stability for interaction with ice crystals. This indicates that during the interaction, EG-10 will not change its structural conformation when binding with ice crystals hence demonstrating stronger cytoprotectively than the other 2 novel peptides.

Overall, Yang and colleagues have identified novel antifreeze peptides, and were the first to analyzed molecular interactions between peptides and ice crystals using molecular docking techniques. Their findings have implications for food and agricultural industries.