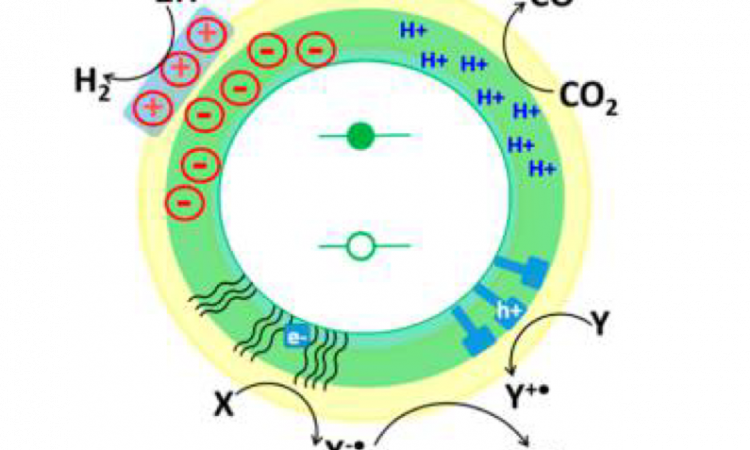 One of the greatest challenges facing society is our growing energy consumption. Figuring out how to provide sustainable energy is an important topic of research. In this Perspectives article, Emily Weiss discusses some basic research in nanoscience and chemistry that will provide the foundation for further advances in energy technology.

One obvious source of renewable energy is the sun. We can use the energy in sunlight to overcome energy barriers to chemical reactions, a process called photocatalysis. This occurs frequently in nature – one well-known photocatalytic reaction is photosynthesis. We can use light to drive reactions in a variety of ways, but some useful applications include reducing carbon dioxide to methane, making hydrogen gas from protons in solution, and producing ammonia via nitrogen fixation.

Many photocatalytic reactions may be thermodynamically spontaneous, which means the energy of the products is lower than the energy of the reactants, and the reaction should occur. However, some have high kinetic barriers, making the reaction progress very, very slowly. One example of this kind of barrier occurs when the reactants and photocatalyst must be brought together for the reaction to occur, but their motion is slow and relies on diffusion of the different molecules in solution. This is where the ligands on the surface of the quantum dot are key to efficient photocatalysis. Different ligands can be employed to help overcome kinetic barriers and facilitate the catalytic reaction.

Another important factor in photocatalytic efficiency is the rate at which reactants reach the catalyst. If reactants can’t reach the catalyst quickly, the overall efficiency of photocatalysis will be slow even if electron transfer and hole removal are efficient. A method to overcome this in the case of reactions that require protons is demonstrated in Figure 3. Phosphonoalkanoate ligands have an acidic proton at pHs less than 8.5 (shown in red) that can be donated to other species in acid-base reactions. By changing the pH, and therefore the amount of protonation, the concentration of protons at the surface of the quantum dot (which is acting as the catalyst) can be increased. This could be one method to increase the efficiency of reactions that depend on protons.

Quantum dots have many advantages as photocatalysts. Tailoring their surfaces using ligands to enhance specific catalytic reactions could expand their potential even more. Many questions surrounding the basic science of these tiny crystals remain unanswered, which makes research in the field of nanoscience all the more exciting!