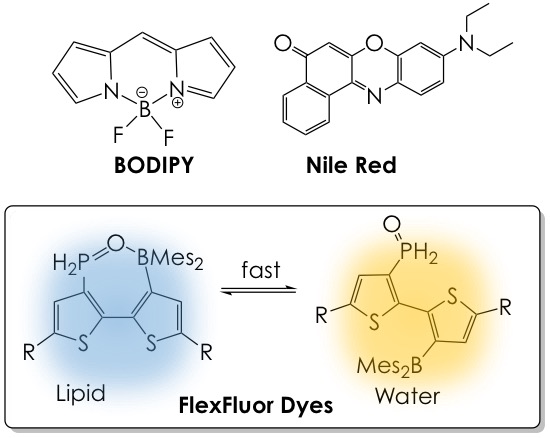 In introductory biology and biochemistry, we learn about the four main types of biomacromolecules and their canonical functions. Of these, lipids seemed to possess less exciting, merely structural roles at first sight. Nonetheless, the functional repertoire of lipids grows to more impressive heights as scientists continue to unravel the substantial functions of these biomacromolecules in cell biology.
Membrane lipids, besides being paramount structural components, also serve crucial roles in cellular signaling and metabolism regulation.  Another class of lipids, lipid droplets (LDs) are dynamic cellular structures that have essential roles in the transportation and metabolism of triglycerides inside cells. Defects in lipid membranes are linked with various neurological disorders such as Alzheimer’s disease and multiple sclerosis. Additionally, imbalances in LD levels are associated with diseases such as type 2 diabetes, atherosclerosis and even tumorigenesis (the appearance of tumors). Thus, detection and live imaging of lipids in biological contexts have become topics of high biomedical relevance, as early detection of abnormal lipid levels could ease the diagnosis and treatment of such diseases.
In the past, readily available lipophilic stains such as BODIPY or Nile Red have been used to visualize lipids inside cells, yet they are monochromatic, that is, they offer little to no color change in different lipid content environments. In this research, the lab of professor Chris Orvig at the University of British Columbia presents a new technology based on strongly emissive flexible fluorophores (FlexFluor) that fluoresce at two different wavelengths (colors) in lipid-rich or water-rich media (Figure 1). The use of these dyes as robust tools to reliably detect the movement and accumulation of lipids and their content level changes in living systems is also probed.
The principle behind these new dyes is their dynamic conformational nature in strong hydrogen-bonding (i.e., aqueous) and weak hydrogen-bonding (i.e., lipid) environments, a feature that is possible by installing Lewis-acidic (electron-accepting) and Lewis-basic (electron-bearing) groups in the same bithiophene core of the molecule. In non-polar or lipid-rich environments, the closed form of the dye, which fluoresces blue, predominates due to the Lewis acid-Lewis base pairing between the phosphine oxide and borane moieties. Aqueous or ethanolic media dismantle this interaction by hydrogen bonding with the phosphine oxide group and hence favor the open form of the dye, which fluoresces yellow. Moreover, the structure of the thiophene side chains (the R groups, Figure 1) can be easily modified, offering access to tailored fluorescence profiles and tunable hydrophilic/lipophilic character of the FlexFluor dyes.
The authors present the synthesis and characterization of three of these dyes, termed Dyes A-C (Figure 2), which exhibit different emissive and hydrophilic/lipophilic profiles. All fluorophores emit in dramatically different colors as a function of the hydrogen-bonding strength of the solvent (ethanol has high hydrogen-bonding strength, ethyl octanoate has a low one). This behavior can offer an unmatched resolution in biological samples since the lipid-rich regions could be easily separated from the surrounding aqueous background. Of note is the fact that the Stokes shifts of the three stains, that is, the difference between the absorbance and emission wavelengths, is larger than 100nm. Such property is advantageous given that many common lipid stains suffer from narrow Stokes shifts (less than 20 nm) and can self-quench.
With this and further characterization behind their backs (the curious reader can refer to the original article for complete experimental details), the authors decided to test their dyes in two proof-of-concept experiments. The first one involved the visualization of LDs in mouse adipocytes (cells dedicated to storing fat) (Figure 3A). Given that poor storing capacity in adipose tissue leads to further complications in patients with type 2 diabetes, probes that can report on distribution and fat levels of LDs in adipocytes are of great utility. To this end, incubation of adipocytes with lipophilic Dye A and hydrophilic Dye B, followed by fluorescence microscopy imaging revealed that Dye A stays in the lipid-rich LDs and emits blue light, while Dye B localizes to the aqueous cytoplasm, where it emits greenish-yellow light (Figure 3A). This bichromatic nature of the fluorophores permits robust identification of hydrophobic and hydrophilic environments in biological settings.
The second proof-of-concept involved the imaging of phospholipid-rich regions within a single cell. A suitable and medically relevant model system for such study is the brain given that abnormalities in the myelin sheath (alternating layers of phospholipid and cytoplasm wrapped around axons in neurons) have been linked to neurodegenerative diseases (Figure 3B). While the lipid-water compartmentalization in neurons is not as clear-cut as in adipocytes, it was still possible for the authors to simultaneously distinguish fat-rich and aqueous regions via fluorescence microscopy. Imaging only with Dye C, which is more amphiphilic in nature, allowed clear visualization of the axon’s aqueous cytoplasm in the form of the expected yellow fluorescence. Areas with increased fat content, namely the surrounding myelin sheath, are characterized by shorter wavelength emission and present a more greenish color as anticipated for a structure that contains both water and lipid (Figure 3B). Thus, the change in the “blueness” or “yellowness” levels of the emission of Dye C in can act as a reporter of myelin sheath composition and can, thus, become a powerful tool for neurodegenerative disorder diagnosis.
In synthesis, the authors have developed a small library of easily accessible bithiophene fluorophores that respond bichromatically to environments of high-lipid or high-water content. The dyes’ emission colors and global lipophilicity or hydrophilicity can be readily customizable, and their application in the imaging of fatty structures in biological samples is robust and reliable, even allowing the identification of both aqueous cytoplasmic regions and lipid-rich structures in the same cell without the use of antibody-based fluorescent tags. In future research, the authors intend to follow up on the biomedical applications of these findings by testing the FlexFluor molecules on samples of multiple-sclerosis diseased spinal chord.
Share
Tweet
Share
Pin
Share
0 Shares