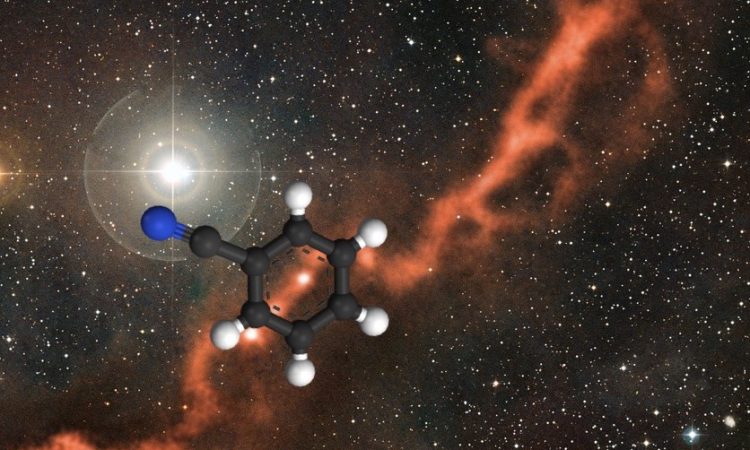 Title: Detection of the aromatic molecule benzonitrile (c-C6H5CN) in the interstellar medium

It is often said that we have to find our roots to know ourselves. And for many scientists, this is about the search for organic molecules. Since we are all made up of organic matter, the discovery of organic molecules in outer space might provide clues about the formation of planets, and perhaps the beginning of life! By resolving the long-standing mystery of a faint infrared light in galaxies, scientists observed and identified the first aromatic molecule in space, which provides insights into how complex organic molecules are formed in the cosmic world.

Identifying compounds in outer space is always a challenge. For chemicals in the far end of the universe, it is not feasible to take a sample and perform tests in a laboratory. Instead, scientists make use of the infrared light that these molecules emit to identify them. Just as a person gives off heat when they run, molecules emit infrared radiation when they vibrate. Different molecules have different emission patterns in spectroscopy, the same way humans have unique fingerprints.

However, there is a mysterious infrared glow in these far-off galaxies. Scientists name this unknown emission as unidentified infrared (UIR) bands. Because these bands match the characteristic vibrations of C-C and C-H bonds, scientists think the universe is abundant with compounds containing benzene rings, or polycyclic aromatic compounds (PAHs). Aromatic molecules can be seen as a ring where electrons are shared within the cyclic structure and stabilize the molecule. Although scientists are skilled at using spectroscopy on Earth, identifying a specific molecule in the PAH family with infrared detection from space is very difficult. It is like picking out an individual voice from a choir of a hundred singers all singing the same note.

Attempting to resolve the mysterious UIR bands, researchers in this study have turned to radio astronomy. Instead of studying the vibrations of molecules, scientists investigate their rotations. As rotational movements are related to the 3D geometry of molecules, scientists can distinguish molecules much more easily. Just as the vibration of a molecule results in infrared radiation, its rotation emits microwave radiation (Figure 1). Therefore, scientists made use of a radio telescope, Green Bank Telescope, to study the rotational transitions of molecules. Looking into Taurus Molecular Cloud 1 (TMC-1), scientists have observed eight out of nine distinct spikes in the radio spectra that correspond to the rotational transitions of benzonitrile. The observation also agreed with the spectra obtained from laboratory experiments. They have therefore concluded the detection is due to the presence of benzonitrile in TMC-1. TMC-1 is known as one of the coldest molecular clouds with a temperature of 10K. To chemistry students, benzonitrile may appear to be a very simple molecule that they would never worry about on an exam! Yet, it is the largest organic molecule ever seen using radio astronomy! It consists of a benzene ring attached to a cyanide group (Figure 2), is colorless and smells like almonds. Because of its stability, it is widely used as a solvent and for industrial production of rubbers and polymers. Despite its wide range of practical uses, it is highly toxic and harmful to humans with direct exposure. Since benzonitrile can be produced in a reaction between benzene and cyanide, measuring benzonitrile may be the clue to how benzene, PAHs, and other complex organic molecules are formed!