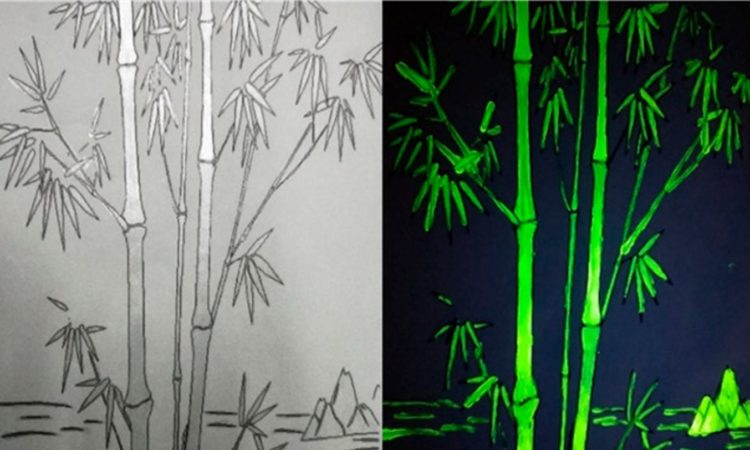 Humans enjoy bright objects – as evident from our fascination with glittering gems, shiny metals and even photoluminescent dyes. Photoluminescence is when compounds luminesce or emit light after absorbing energetic photons from a source of electromagnetic radiation (Fig 1). Photoluminescent dyes have a variety of applications, from anticounterfeiting to functional coatings.   Electromagnetic radiation (ER) can vary from microwaves to ultraviolet and visible light; upon exposure to the right wavelength on the ER spectrum, some compounds produce visibly colored solutions or bright, fluorescent greens.

Recently, scientists at the University of Science and Technology of China published a one-pot recipe to create an amazingly efficient copper-iodide based photoluminescent dye, with approximately 98% quantum efficiency. That means that 98% of the total incoming energy, in this case ultraviolet light, is converted by the dye into the green fluorescence it emits.

Wang et al.’s method also addresses several issues that plague the field of photoluminescent dye production. Many organic dyes known as phosphors rely on rare-earth metals (such as europium and terbium) for their luminescent properties, presenting significant problems with long-term availability,  high cost and lengthy reaction processes (Fig 2a). Alternatives to synthetically crafted dyes include carbon-dots (Fig 2b), nanoparticles made exclusively of carbon connected to various color and property “tunable” functional groups, but these currently suffer from low quantum efficiency.

The researchers focused on a “one-pot” chemical synthetic scheme, which throws all the ingredients into one beaker to produce their glowing product (Video 1). Though copper-iodide (CuI) based dyes are not unusual, scaling up their production previously faced changes to do with solubility; the CuI would precipitate out of typical organic solvents like ethanol or water before any reaction occurred.

To combat this issue Wang et al. dissolved polyvinyl propylene (PVP) in ethanol, and then added, with continuous stirring, a solution of CuI dissolved in potassium iodide (KI). Finding the solution entirely homogenous (and not a suspension of copper particles), the authors then added the pr-ted ligand. This ligand – with a full chemical name of 1-Propyl-1,4-diazabicyclo[2.2.2]octan-1-ium – is a functional group that can “tune” a nanoparticle’s properties by, in this case, increasing the nanoparticle’s ability to absorb and emit light.

The PVP forms micelles, or tiny bubbles of organized molecules that allow their hydrophobic parts to crowd together while the hydrophilic parts remain outside and shield them, to remain stable in the ethanol solvent. These micelles also critically stabilize the copper iodide and allow the copper iodide and pr-ted ligand to react together and form the nanoparticle product (Cu4I6(pr-ted)2). Conveniently, there are colors changes at each step – transitioning from clear PVP in ethanol, to yellow with copper addition, to a cloudy cream containing the not-dissolvable nanoparticles, which upon turning off the lights, glow in the dark (Fig 3)!

When looking at application, this Cu4I6(pr-ted)2 has a unique absorption-to-emission property where there is a 113 nm difference between where the compound absorbs and where it emits on the ER spectrum, known as a Stokes shift. This large difference indicates this copper-iodide nanoparticle would be useful for ultraviolet shielding on windows, which the group demonstrated. Their Cu4I6(pr-ted)2 almost completely reduced the amount of ultraviolet light, between the wavelengths of 300 and 380 nm, that could transmit or travel through the glass square (Fig 3).

The team’s method significantly reduced cost by using accessible metal complexes and common solvents, provided a clear scale-up opportunity for mass production and even demonstrated utility as a highly efficient glow-in-the-dark paint! In the future, perhaps we will see a bottle of Wang et al.’s copper-iodide nanoparticles available for purchase in a paint store near you, or even tinting your car windows to prevent UV penetration.