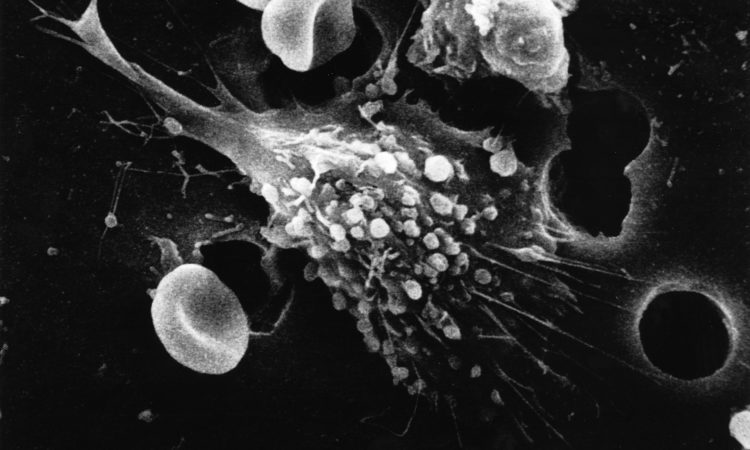 Feature image by Susan Arnold for the National Institutes of Health (public domain).

The mere mention of the word cancer is enough to elicit fear. According to the World Health Organisation (WHO), cancer is the second leading cause of death globally, with about 1 in 6 deaths being caused by some form the disease.1 Cancer describes a wide range of diseases that can affect any part of the body, the common feature of such diseases being the rapid production of abnormal cells that can invade and spread to other parts of the body.

The therapeutic battle against cancer has been present for millennia, with some of the earliest historical findings of patients with cancer dating back to ancient Egyptian and Greek civilisations. The treatment of cancer has changed drastically since this era. Prior to 1900, the only therapeutic option for cancer was radical and generally ineffective surgery. Radiotherapy was developed in the early 1900s followed by chemotherapy in the 1940s. These types of therapy showed some success in treating cancer but off-target effects including toxicity have been problematic.2

More recently, a new type of cancer therapy called immunotherapy has emerged. This type of cancer treatment involves using the body’s own natural immune defence system to detect and destroy tumour cells. A major advantage of this therapy is that it aims to target only cancerous cells, while allowing healthy cells to survive.

Within the immune system, T-cells are in charge of recognising and destroying foreign substances, called antigens. Specifically, the T-cell receptor (TCR) protein complex on the surface of T-cells recognises the antigen and initiates an immune response (Figure 2).

Tumour cells are foreign to the human body. Therefore, theoretically, T-cells should be able to recognise and destroy them. However, tumour cells can hijack and evade the human immune system. One way they achieve this is through the expression of a protein called PD-L1. This protein interacts with another receptor on the T-cell surface called PD-1. The interaction of PD-L1 and PD-1 causes the T-cell to become inactivated (Figure 3). This interaction is important in healthy people for immune system regulation, however, cancer cells can over-express the PD-L1 protein and thus, survive the immune system.

Last month, researchers from the University of Pennsylvania published the results of a ground-breaking clinical trial for a novel immunotherapy utilising these T-cell interactions. The researchers used a combination of CRISPR-Cas9 gene editing and T-cell therapy to treat patients with sarcoma or multiple myeloma. This is the first example of a clinical trial for a therapy using a combination of both of these techniques.

CRISPR-Cas9 is a technology that can be used to edit genes. It was adapted from a system used in bacteria to fight off invading viruses by chopping up their DNA. In practice, the system works through the formation of a complex between synthetic guide RNA (sgRNA) and the Cas9 protein, an endonuclease. The sgRNA allows particular segments of DNA to be recognised and then cleaved by the Cas9 protein (Figure 4). Scientists use this to delete or insert particular segments of DNA into longer strands.

Adoptive cell therapy, is a technique that involves genetic engineering of a patient’s T-cells so that they produce a TCR that specifically recognises tumour cells. These edited T-cells are then delivered to the patients. The patients in this study had tumour cells that produced a protein called NY-ESO-1. The researchers, therefore, took the patient’s T-cells and inserted a gene for a TCR that would recognise NY-ESO-1, and thus destroy tumour cells. CRISPR-Cas9 technology was used to delete the genes for the natural TCR in order to enhance the expression of their desired TCR for NY-ESO-1. The PD-1 protein gene was also deleted, in the hope that this would reduce the chances of PD-L1 on tumour cells interacting with the PD-1 receptor in T cells and silencing the immune response (Figure 5).

This study was the first clinical trial example of the combination of CRISPR-Cas 9 and adoptive T–cell therapy. The study aimed to test the safety and viability of such a method, specifically, whether the modified T-cells could survive once administered to the patients and whether there were any negative off-target effects.

Three patients received the novel treatment, but unfortunately, one has since passed away, and the disease has not been cured in the other two. It must be noted, though, that participants of such novel trials are usually extremely unwell when they enter the clinical trial. It was determined, however, that the modified T-cells did survive for up to 9 months in the patients, and off-target effects from the gene-editing process were minimal, thus suggesting the results of the study were, in fact, positive.

The results of this revolutionary study suggest that while CRISPR-Cas9 gene editing, in combination with adoptive T-cell therapy, requires further development to become a truly effective treatment, the concept is certainly feasible.

With this new wave of popularity for novel immunotherapy over classical chemotherapy for the treatment of cancer, the need for synthetic organic chemists in the battle against cancer may dwindle. Or perhaps more likely is the rise in fruitful collaborations between chemists, immunologists, and biologists. In the battle against cancer, such collaborations will be vital.