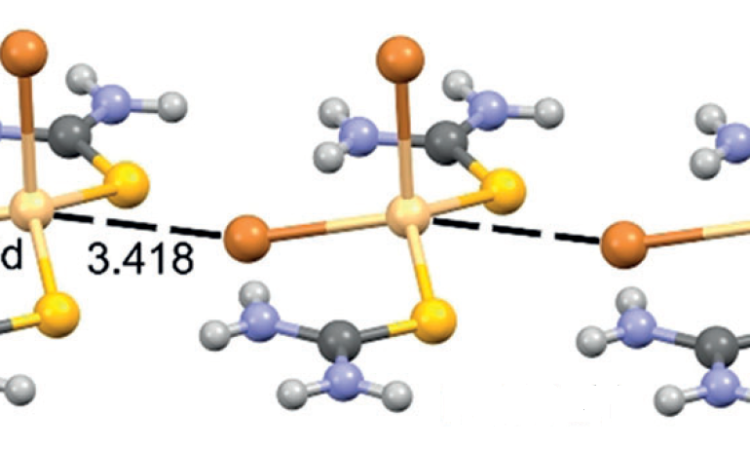 If you study chemistry in high school or as an undergraduate, you will learn that there are a few types of bonds: covalent, ionic, coordination, hydrogen, and van der Waals.

Every bond is described in terms of specific characteristics, and, as life is never black and white, the bonds very rarely match the textbook definition, because – as my professor would say – “Nature doesn’t know about our textbooks.”

On top of that, not every interaction between atoms or molecules falls in these descriptions and sometimes researchers define new types of bonds, such as the recently described σ-hole interactions – between a covalently-bonded atom of Groups IV-VII and a negative site – and regium bonds – between Group XI nanoparticle and electron donors.

A team of researchers – led by Antonio Frontera – describes a new type of noncovalent interactions between Group XII (Zn, Cd, Hg) elements and electron-rich atoms like halogens. They named it the Spodium bond. The elements of this group are called spodium elements using the Latin name of ZnO.

Unlike transition metals, Group XII elements have full external d orbitals (with 10 electrons), and as such, they do not have room for bonds involving them since they cannot accept electrons from any ligands. Or, at least, not as in coordination complexes.

In this paper, the authors found that when these metals are in their +2 oxidation state they assume a (pseudo)tetrahedral geometry and have a region of positive potential that can interact with the electron-rich Lewis bases.

Despite being purely theoretical, this study is based on X-ray structures deposited in the Cambridge Structural Database (CSD). By observing the atom distances, the authors noticed that Group XII atoms and halogens were closer than expected in cases where a bond was not involved, calculated by the sum of the single van der Waals radii. However, they were further apart than if they would have been in a covalent bond, and this fuelled the researchers’ curiosity. This property may have gone unnoticed before considering that the van der Waals radii of the Group XII elements seem to have been underestimated.

The researchers began their study by computationally exploring SpX2L2 structures (X=Cl, Br, I, L=thiourea). They studied their molecular electrostatic potential (the charge distribution on the surface), finding positive values along the bisector of the L-Sp-L angle. This led them to assume the possibility of a weak bond with electron-donating atoms.

Next, they analyzed the interaction of SpX2L2 compounds with lone-pair bearing atoms like carbon monoxide, acetonitrile, and formaldehyde. Among the Group XII atoms, they noticed that Cd has a higher tendency to form Spodium bonds. Further characterization led them to understand the nature of these interactions, involving the antibonding Spodium-X orbital (σ*).

The discovery of this new interaction is not only a textbook matter. The spodium bond, together with the other weak interactions, can be particularly useful for supramolecular chemists and crystal engineers when designing crystal structures.