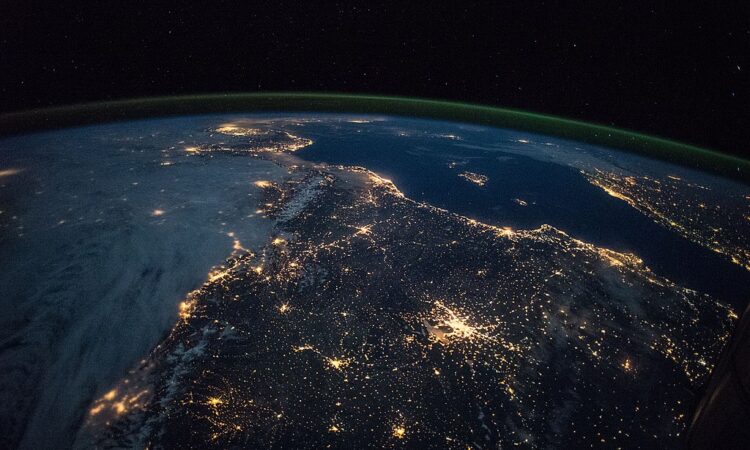 Most people have experienced a bad sunburn after spending long times in the sun. These burns are from ultraviolet rays that reach Earth’s surface. Excessive exposure to these rays leads to cancer and cause cataracts. The ozone layer is like global sunscreen. In the stratosphere, ozone stops UV light that would otherwise reach the surface, absorbing 100% of the most dangerous UV-c radiation, 90% of UV-b, and 50% of UV-a radiation. This protects all living things on the surface of the earth, allowing us to flourish.

In 1974, researchers Molina and Rowland discovered that chlorofluorocarbons (CFCs), prized for their relative inertness, travelled to the stratosphere where they were photocatalyzed and the freed chlorine atoms reacted with ozone. This reaction produced oxygen gas and consumed ozone, depleting it in the stratosphere, as shown in the reaction mechanism below. Further, the inert CFCs stay in the atmosphere for decades.

At the time, CFCs were used widely and found in everything from hairspray to refrigerators. Though Molina and Rowland were vocal about the importance of their discovery, and later won a Nobel Prize, it was not until almost a decade later that the effect of CFCs on stratospheric ozone was discovered: a hole over Antarctica where our global sunscreen was only 2/3rds its original thickness.

The global community jumped into action with the Montreal Protocol, a global agreement limiting the amount of ozone depleting substances (like CFCs) released into the atmosphere. Ratified in 1987, it is still the only United Nations treaty ever to be ratified by all 198 UN Member States, shown in Figure 1. And we are finally quantifying the benefits of global collaboration! A study recently published in ACS Earth and Space Chemistry by Madronich et. al. used data collected from the U.S. Environmental Protection Agency (EPA) to project how many people were saved from skin cancer and cataracts as a result of implementing and strengthening the Montreal Protocol.

The Atmospheric and Health Effects Framework (AHEF) is a model that the EPA established to quantify the health impacts of the Montreal Protocol. This model allows researchers to simulate different scenarios relative to 1980 ozone levels and estimate the occurrence of skin cancer and cataracts in the.

Madronich et. al. compared three different scenarios: no Montreal Protocol (NoControl), the original agreement (MP’87), and the current, more robust protocol (A1) that has been amended to completely eliminate emissions of even more ozone depleting substances. They found that without the Montreal Protocol, UV radiation would have been significantly higher now and continued to increase. Perhaps unsurprisingly, this would have led to many people being exposed to excess UV radiation causing increased rates of skin cancer or cataracts. Figure 2 illustrates this specifically with cases of melanoma in the United States. Although enacting the original protocol significantly decreased the cumulative number of cases, amending the protocol to ban more ozone depleting substances flattened the exponential curve of cases.

Figure 3 shows how increased UV exposure would likely lead to more cases of squamous cell carcinoma, a type of skin cancer, in white women based on birth year. The red line plots the difference between if the Montreal Protocol was never adopted and its current form (NoControl – A1) and the purple line plots the difference between the original protocol and its current, more robust form (MP’87 – A1). The higher the trace goes, the more skin cancer was prevented.

This kind of comparison was done for all the demographic data available to the researchers. After running the models, they found that the current, fully amended protocol prevented an estimated 443 million cases of skin cancer, 2.3 million skin cancer deaths, and 63 million cataract cases in people born in the US between 1980 and 2100.

The Montreal Protocol is widely agreed to be the most successful global environmental policy enacted, and this study shows how much we have and will benefit from its continued implementation. As climate change creates an incredibly uncertain future, looking back on successful environmental policy brings hope that we can prevent the irrevocable damages predicted for warmer world. A comprehensive, science-based global policy has worked in the past and will work in the future, and the time to implement one addressing climate change is now.

Fionna is a PhD candidate at Colorado State University in Fort Collins, CO. She uses Raman microscopy to directly image where molecules go within living plant cells. When she's not in lab, Fionna is usually out walking her dog in the foothills or reading books to her cat.