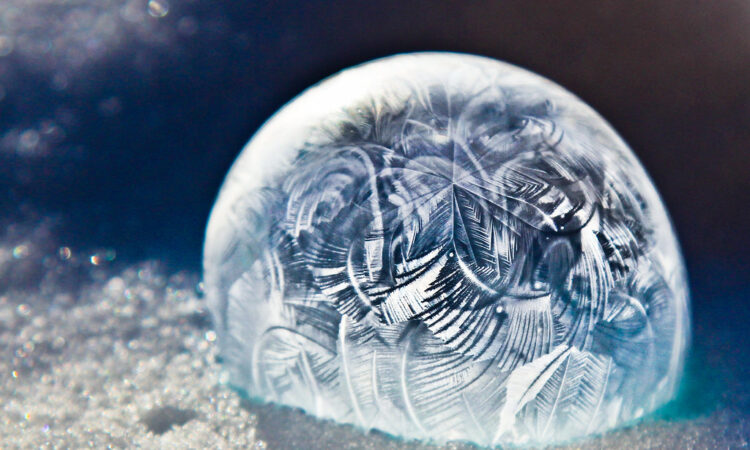 Featured image “Ice Crystals” by spurekar is licensed under CC BY 2.0 from CreativeCommons

Protein crystallography has been a main-stay of structural biology since its discovery in the mid 1800s. Though proteins are large, often irregularly shaped molecules, under the right conditions they can pack together in a repeating pattern to form crystals. These crystals can then be examined using X-ray diffraction techniques to determine the 3D structure of the constituent proteins, down to the atomic level. These structures provide invaluable information for drug design and understanding the mechanism of the biological processes the protein is involved in. However, not all proteins crystallise readily and generally a large number of conditions need to be screened to find the optimal mixture of salts and surfactants to encourage crystal growth. Organic and inorganic chemists alike will attest to the usefulness of nucleating agents – something with an imperfect surface that lets small aggregates stick to it and start, or nucleate, the growth of a crystal. This might be adding a small crystal of the material itself to a metal-organic framework synthesis, or simply scratching the surface of the conical flask to initiate a recrystallisation. These approaches are less amenable to protein crystallisation which is done on microlitre scales. In this paper, the authors explored using air bubbles as a means to nucleate protein crystal growth.

The researchers from Loughborough University in the UK used a protein called lysozyme, extracted from hen egg whites, as it is cheap and readily available, then set up a series of crystallisation experiments using the ‘Hanging drop’ method; where 2 μL (2/1000ths of 1 mL) drops of protein in crystallisation solution hang above 1 mL of a buffer that will help to precipitate the protein (Figure 1). The concentration of protein and salt (NaCl) in the crystallisation solution was varied between experiments, and either 0, 1 or 2 small bubbles were introduced into the hanging drop where the protein resided. The drops were regularly inspected under a microscope to determine the induction time (how long until the first signs of crystal start to form), the density of the crystals, and quantity and size of crystals formed.

The protein gathering around the bubble surface also helps to maintain the air bubble size. In an experiment where a second bubble was added to the droplet later in the experiment, the second bubble generally decreased in size over time (Figure 2c to then 2d). This can be explained as there is less protein available in the solution – some is surrounding the first bubble, some is already crystallised out of solution – and therefore the surface of the second bubble is less stable and it shrinks.

So far, we know the experiments with bubbles were able to nucleate crystals. The researchers’ study showed these experiments had the same or shorter induction time (quicker to start crystal growth) than those without a bubble, under almost all (16 out of 18) of their experimental conditions. The biggest difference in induction time between a bubble and no-bubble experiment was observed when both the salt and protein concentration were low. In this case the presence of a bubble could reduce nucleation time by 27%. In all cases, the crystal density was greater in experiments that contained a bubble than those without a bubble, by as much as 1.5x. The highest density within these droplets was located around the bubble surface (Figure 3) which again indicates the higher concentration of protein at the bubble surface aids crystal nucleation and growth. Lastly, the researchers also concluded that the overall yield of crystals by mass was 10% greater in the experiments containing a bubble and approached quantitative yield in some cases.

The researchers go on to discuss a number of the physical processes that likely drive these observations and highlight that there are a number of variables that still need more work to unpack their exact impact on the experiment. This includes the interesting observation that more crystals grew at the interface of the small bubbles inserted into the hanging droplets, than crystals that grew at the air-liquid interface of the hanging drop itself. This technique appears to have a lot of potential to improve protein crystal nucleation, and aid the scale-up of protein crystallisation process without introducing other nucleating agents that need to be removed or washed out before the crystals can be used. The next step is to apply these ‘soft-templates’ to more complex and larger protein crystallisation set-ups.