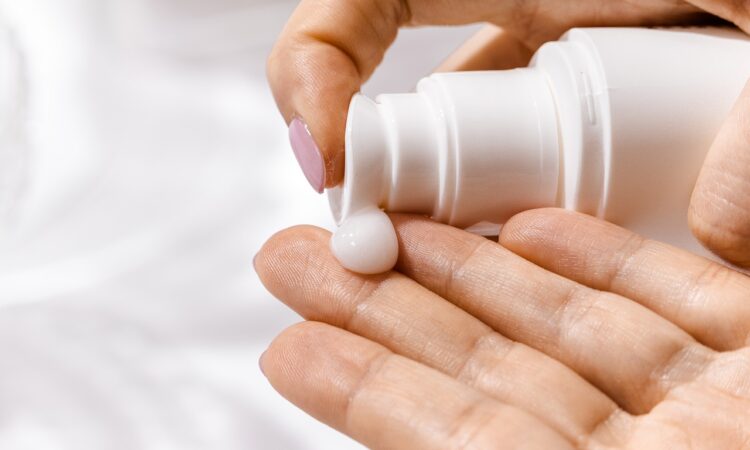 A study published by Downs et al. in March 2021 received much attention for its data showing that the carcinogen benzophenone accumulates over time in sunscreen products that contain octocrylene (Figure 1). This study led to dramatic media headlines and many questions from consumers on the safety of some commercial sunscreens. A subsequent Letter to the Editor by Christian Surber cast doubt on some of the claims made in this manuscript and warned against sensationalizing reports that “unsettle rather than inform” consumers. So how do we, as readers, as scientists, as students, and as consumers parse through these contrasting publications?

First, let’s examine the original manuscript by Downs et al. The purpose of the manuscript was to assess the benzophenone content in sunscreen containing octocrylene at purchase and after the product had aged. Octocrylene is one of fourteen FDA-approved ingredients for use in commercial sunscreen formulations. Usually, octocrylene is used in conjunction with other ingredients to provide broad-spectrum protection against UV rays. While octocrylene is regarded as safe by both the FDA and EU regulatory agencies in formulations of up to 10%, some concern has been raised about contamination of octocrylene with benzophenone.

Downs et al. cite studies that suggest benzophenone is a carcinogen, mutagen, and endocrine disruptor. Carcinogens and mutagens are similar, and most chemicals that fall into one category also fall into the other. Nevertheless, they have separate definitions. A carcinogen is a chemical compound that has the ability to cause cancer, or more specifically, cancerous tumors. A mutagen is a chemical compound that causes mutations in DNA. An endocrine disruptor is a chemical that interferes with normal hormonal signaling. These claims are alarming when cited alongside a study that suggests dermal absorption of benzophenone is high: the manuscript states that up to 70% of benzophenone, when applied to the skin, is absorbed into the blood stream.

Contamination of octocrylene by benzophenone is in part due to the manufacturing process of raw octocrylene. However, Downs et al. raise concerns that benzophenone could also be a degradation product of octocrylene as commercial products age (Figure 1). Therefore, the team set to work assessing this possibility. They purchased nine products in triplicate (which means they purchased three of each product to look at variability within or between lot numbers) from France (and therefore under EU regulation). Eight of these products contained octocrylene and one did not, the latter of which was used as a control. They also purchased eight products in triplicate from the US (and therefore under FDA regulation), all of which contained octocrylene.

Figure 1: Image from Downs et al. The proposed breakdown of octocrylene to benzophenone over time.

The authors then assessed both the original content of benzophenone and benzophenone content after the products had been artificially aged. Artificially aging a product means that the team used an FDA-approved method that simulates aging by exposing the product to heat and humidity. These methods are often used to check the stability and safety of a commercial product over time. The concentration of benzophenone was determined using liquid chromatography and mass spectrometry and comparison to authentic benzophenone standards. The research team found that all products, except the control, had benzophenone contamination (ranging from 6 mg/kg to 186 mg/kg). Allowable amounts of benzophenone in consumer goods vary by product type and by state or country regulations. Aging the products resulted in an increase from 38.7% to 199.4% (geometric mean) of the originally measured concentration in the EU samples. In the US samples, the increase ranged from 14.5% to 134.4% (geometric mean). Downs et al noted that the concentration of octocrylene did not seem to be correlated with the amount of benzophenone detected after aging and concluded that this breakdown is most likely dependent on formulation.

The Letter to the Editor by Christian Surber first points out that the presence of benzophenone in manufactured octocrylene is normal and is not necessarily due to manufacturing negligence. The letter stresses that 100% pure substances do not generally exist on Earth, and contamination in manufacturing is expected. Manufacturing usually abides by rules and regulations that set a specific standard for how much contamination is allowed, and this allowable contamination is usually determined by a risk assessment.

Surber goes on to point out the study claiming 70% of benzophenone is absorbed through the skin is an unrealistic representation of absorption because the study cited was assessing benzophenone dissolved in a solution of acetone. Acetone dissolves certain fats that constitute part of our skin, allowing deeper penetration of the benzophenone. It is likely that application to the skin in a sunscreen formulation (as opposed to acetone) results in absorption much lower than 70%.

Surber also points out that although benzophenone is a carcinogen, it has never been shown to have carcinogenic properties when applied dermally. Furthermore, Surber casts doubt on the endocrine-disrupting properties of benzophenone. Surber concludes that the entirety of data concerning benzophenone’s toxicity has been failed to be taken into account.

Both Downs et al and Surber demonstrate important parts of the scientific process: Downs et al. call for rigorous safety testing and transparency on products that affect public health, while Surber calls for accurate, responsible, and complete data contextualization. The role of scientists in the public sphere is often to better the lives of people, promote public health, and safeguard the environment. Indeed, scientists sounding the alarm on products that may be unsafe has a long and important history: think about Frances Kelsey, the FDA reviewer that refused to approve the morning sickness drug thalidomide, which ended up causing fetal abnormalities in countries that approved it; or the scientists that called for the ban of chlorofluorocarbons in refrigerators because of their ozone-depleting properties. The role of scientists, however, is also to accurately communicate data to the general public so they can make informed choices, instead of causing fright and distrust of scientific research.

Disagreement in scientific literature is a normal and important part of the scientific process and demonstrates that the process is working correctly. As for benzophenone, it seems that more studies are needed to conclusively demonstrate whether octocrylene-containing products are completely safe as they age, but it also doesn’t seem to be cause for immediate panic or for throwing out your sunscreen. Remember, when it comes to toxicology, the dose makes the poison! Whatever conclusions are drawn in the future, more scientific disagreement and conflicting studies are imminent before a general agreement is reached.