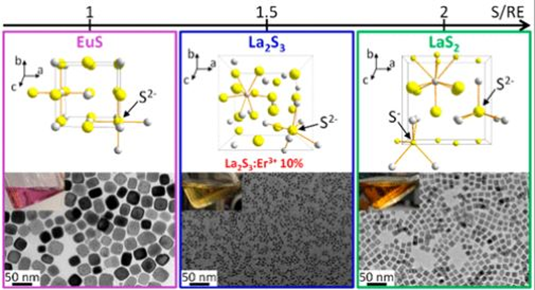 Nanocrystals (NCs) are materials that have all three dimensions in a size regime of less than 100 nm. These materials can have size-dependent optoelectronic properties depending on their nature. Therefore, by exploiting their size-tunable optoelectronic properties, NCs have found uses in many applications including light-emitting diodes, light detectors, and agriculture.

Since their discovery, NCs of a myriad of elements have been successfully synthesized. Most NCs are composed of a mix of metal cations and pnictogen/chalcogen anions (e.g. P, S, Se). Additionally, many NC syntheses can be performed at “low” temperature (<300˚C) compared to the formation temperatures of their bulk counterparts, which can surpass 1000˚C. However, there is a particular group of elements, the lanthanides, that are hard to synthesize and stabilize as metal-sulfide NCs due to their chemical nature and formation temperature requirements.

Lanthanides have useful optical properties that stem from their f-f orbital transitions, the most complex set of orbitals found at higher energy levels. Thus, they are important in the design of new technologies such as infrared detectors. These elements commonly adopt 3+ oxidation states and are therefore hard Lewis acids, which are mostly incompatible with soft anionic environments such as S2- or Se2- (explained in detail later). This would be analogous to trying to build a wall using rocks (hard acid) and Jell-O (soft base) as bricks, not very stable… Furthermore, their chalcogen phases are stable above 1200˚C, rendering solution-based procedures impractical. In fact, the only lanthanide sulfide material that has been stabilized at the nanoscale is europium sulfide.

Due to the complicated temperature and coordination requirements in lanthanide sulfide NCs, researchers have been employing acid-base principles from the Pearson’s hard and soft acids and bases (HSAB) theory to drive the formation of these materials. This theory is a useful qualitative concept that allows the prediction of the affinity of metal ions to ligands. Therefore, it facilitates the optimization of the reaction conditions (i.e. ligand and solvent choice) for rapid precursor decomposition and favourable lanthanide-sulfur bond formation.

For instance, HSAB theory predicts that hard Lewis acids, high positive charge and small size, will have poor compatibility with soft bases, highly polarizable and low electronegativity. An easier way to understand this would be to picture a nail as a hard acid and a piece of wood as a hard base. If you hammer a nail into the wood, it will stay put and strongly attached (compatible interaction). On the other hand, if you try to hammer the nail into cotton candy (soft base), the nail will not be secured in place (incompatible interaction). Thus, by exploiting the incompatibility of soft bases with lanthanide cations, the formation of a lanthanide-S bond can be effectively promoted!

Here, Gouget and co-workers made use of lanthanide iodide precursors to synthesize EuS, La2S3, and LaS2 NCs at low temperatures (<300°C). The reactions were performed using oleylamine as a solvent and capping agent (stabilizer molecules on the surface of the NC) while elemental sulfur and bis(trimethylsilyl) sulfide [(TMS)2S] were used as reactive sulfur sources.

To stabilize the lanthanum phases at a low temperature and to promote the La-S bond formation, the researchers leveraged the incompatibility of lanthanum (a hard acid) with iodide (a very soft base) in the LaI3 salt precursor. Based on HSAB theory, lanthanum will tend to form stronger bonds with sulfur anions over the iodide because it is a harder base compared to I ̶. Conversely, performing the reactions with lanthanum dithiocarbamate, having a more compatible and stronger base counter ion, did not allow the formation of lanthanide sulfide NCs. This illustrates how important it is to regulate the reactivity of the precursor in NC syntheses, here being one of the decisive factors for the formation of the final NC.

Notably, to access different lanthanum sulfide phases, two different sulfur sources were used. Specifically, (TMS)2S forms La2S3 and elemental sulfur generates LaS2. This can be explained by looking at the sulfur environment in the unit cell for both structures; La2S3 contains a S2 ̶  sulfur local environment (Figure 1), while LaS2 involves the presence of S2 ̶  as well as S ̶, which are the types of sulfur species that are released by (TMS)2S and elemental sulfur, respectively. The group successfully generated NCs for both phases at considerably lower temperatures (220-255°C, Figure 2) compared to their bulk counterparts (>1200°C), demonstrating how the stability of a solid phase can drastically change just by working in a different size regime. Indeed, this is the first demonstration of an effective lanthanum sulfide NC synthesis. These experiments also show how modifying the sulfur source identity is a useful synthetic tool to tune the phase of NCs in a polyphasic system.

The formation and stabilization of these lanthanide sulfide NCs by this group of researchers highlights critical synthetic handles for the harmonious design of NC syntheses, those being: 1) The use of HSAB theory to predict chemical compatibility and reactivity; 2) The choice of sulfur source to direct the formation of specific NC phases; 3) The differing temperature requirements for nanocrystalline systems compared to the bulk phase.

Finding new ways to access unknown—and challenging-to-synthesize—nanocrystalline systems is required to expand the toolbox of synthetic chemists. In this regard, simple concepts such as the HSAB theory can be sometimes overlooked even though they can play a significant effect when it comes to attaining the formation of unfamiliar NCs. Thus, the insights provided by Gouget and co-workers will guide the development of new procedures for the synthesis of new nanocrystalline systems.