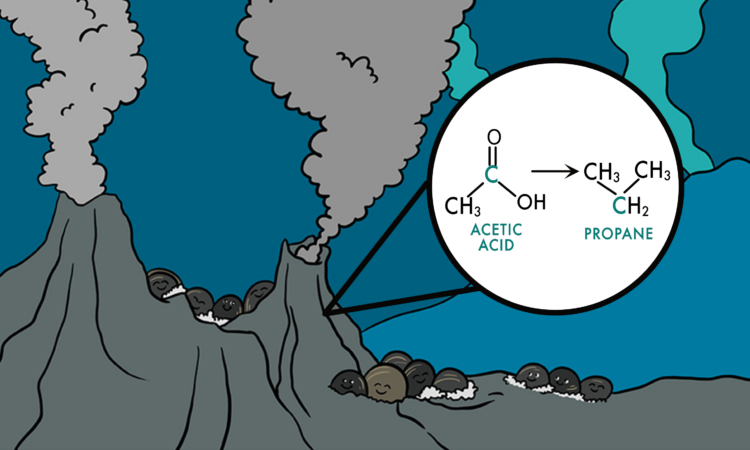 Every day you use oil and natural gas. They drive your cars; they make your plastics; and they heat your home. It may come as a surprise then that even leading geoscientists don’t fully understand how oil and gas form. They know that oil and gas are made when organic matter (the ancient remains of plants and other lifeforms) is buried and heated, but they don’t yet know what exact molecular reactions occur to make these global commodities. For example, natural gas is full of short-chain hydrocarbons (SCH) known as methane (C1), ethane (C2), and propane (C3), but there are many sources of SCH’s, including biological synthesis by microbes, thermal “cracking” of buried organic matter, and abiotic polymerization of C1-compounds. Geoscientists study environments where oil and gas are actively being created to understand which of these sources is most important. One of those locations is at the bottom of the ocean at a hydrothermal vent in the Gulf of California called Guaymas Basin. The authors of this study in PNAS went to Guaymas Basin and discovered a totally new way of forming SCHs that could have implications all over the world.

Their discovery began with a curious pattern in the carbon isotope composition of methane, ethane, and propane that couldn’t be explained using current models of SCH formation. (For a more in-depth discussion of carbon isotopes, see my previous article). Usually methane has more 13C than ethane or propane leading to a higher

13C value for methane than the other SCHs. In this case, methane was the most 13C depleted. Another unusual feature of the Guaymas Basin samples was that the SCHs had decreasing

13C as carbon number increased (Figure 1), a pattern that couldn’t been reconciled with the low

13C value for methane. The answer to this conundrum came by looking at the short-chain fatty acids (SCFA), which showed a similar pattern in the

13C values matched those of the SCHs, could the SCHs come from the SCFAs?

Song et al. designed two experiments to answer this question. In both experiments, they put Guaymas Basin sediments into a high temperature reactor that mimics environmental conditions. To the first experiment, they added CO2 that was labelled with 13C, making 13CO2. The 13C-label acts as an inert tracer, like putting a red dot on the back of a playing card to track where it goes after shuffling the deck. 13CO2 reacts similarly to normal CO2 but can be easily distinguished and quantified. When Song et al. ran the high-temperature reaction (shuffled the deck) with 13CO2, they found the 13C-label in acetate, the C2 SCFA. Somehow CO2 had inserted itself into the acetate molecule.

To test this further, they added 13C-labelled acetate to the samples and found that not only were ethane and propane produced, but they both had the label attached. Ethane and propane clearly were being generated from SCFAs. This model can explain the enigmatic

13C distributions in SCHs, since CO2 has a characteristically high

13C value. If CO2 makes its way into acetate and subsequently into the SCHs, the SCHs will have a higher

13C value than methane, as is observed in Guaymas Basin (Figure 2).

These experiments revealed that in Guaymas Basin, acetate is fueling the creation of ethane and propane, two important components of natural gas. This represents an entirely new way of creating oil and gas. This process could be quantitatively important all over the world at hydrothermal vents, because SCFAs are a common feature of these environments. Through their experiments with carbon isotopes, Song et al. solved one piece of the gas formation puzzle that has riddled geoscientists for decades.