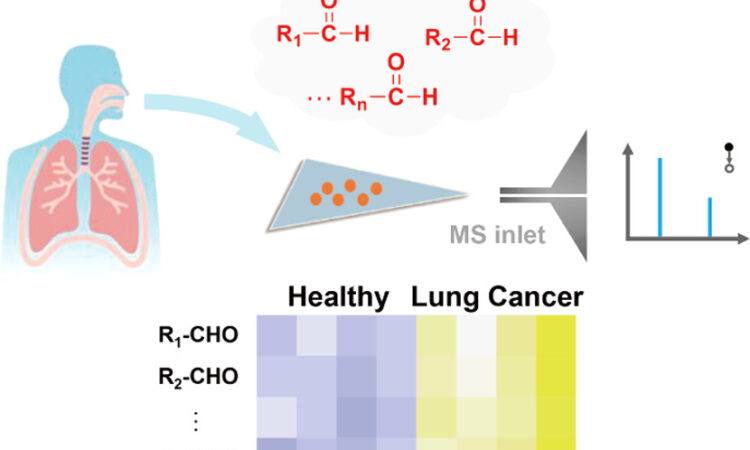 Lung cancer is one of the most common and fatal types of cancer impacting millions of individuals around the world. While methods for diagnosing the condition exist (such as x-rays and biopsies), some aldehydes in exhaled breath (EB) are actually believed to serve as potential biomarkers for lung cancer. However, detecting these aldehydes in EB is challenging because our breath is also made of other, more abundant components, such as carbon dioxide. Thus, the aldehydes are super dilute and hard to detect. The traditional method for detecting such volatile organic compounds (VOCs) is called Gas Chromatography-Mass Spectrometry (GC-MS). While robust, it is also very time-consuming due to extensive sample preparation and requires much technical expertise.

A paper published in Analytical Chemistry by Li et al. from 2021 describes a new and fascinating way to test for aldehydes in EB. Their goal was to develop a non-invasive method that is quick, relatively cheap, and capable of detecting very small amounts of the aldehydes in a user’s breath. In general, having the ability to conduct such point-of-care (POC) tests is convenient, and especially good for resource-limited communities, because it allows doctors to perform tests at the bedside. In many cases, these types of tests can generate instant results because the lab is being brought to the sample.

The workflow of the method developed by Li et. al. is shown below in Figure 1. 4-aminothiophenol (4-ATP) is attached to silver nanoparticles (AgNPs) through thiol-Ag interactions. These capped nanoparticles are loaded onto a triangular piece of chromatography paper. Upon exposure to gas-phase aldehydes, the Schiff base reaction occurs in which the amines condense onto the aldehydes to create easily-ionizable imines. Here, the gas-phase aldehydes are captured, immobilized, and ready to feed into a mass spectrometer (MS) through paper spray ionization for detection.

When the researchers tested the device using various aromatic and linear aldehydes they had on hand, they could identify each aldehyde by the resultant mass-to-charge ratios (m/z) of the sample’s components. The researchers changed different parameters to optimize the method and achieve high sensitivity (<0.1 parts per trillion).

Once the method was optimized, it was time to put their new device to the test! The researchers gathered a group of 6 healthy volunteers and 6 lung cancer patients. The EB samples were collected in gas sample bags and were incubated prior to introducing them to the test paper. As shown in the heat map (Figure 2) below, different types of aldehydes were detected in the breath of lung cancer patients… and almost not at all in the healthy volunteers. These results not only highlight the utility of the new method but also underscore the ability of distinguishing lung cancer patients from other individuals based on the detection of aldehydes.

While this new technology is not currently in the clinic, it provides a stepping stone towards the implementation of more POC tests in patient care. Perhaps someday, simple and non-invasive tests like this will become a mainstay for disease diagnoses.

Melanie Padalino is chemistry Ph.D. student at Vanderbilt University in Nashville, TN where she works on enantioselective organocatalysis. In her free time, she enjoys playing the violin and guitar, writing, and performing contemporary dance.