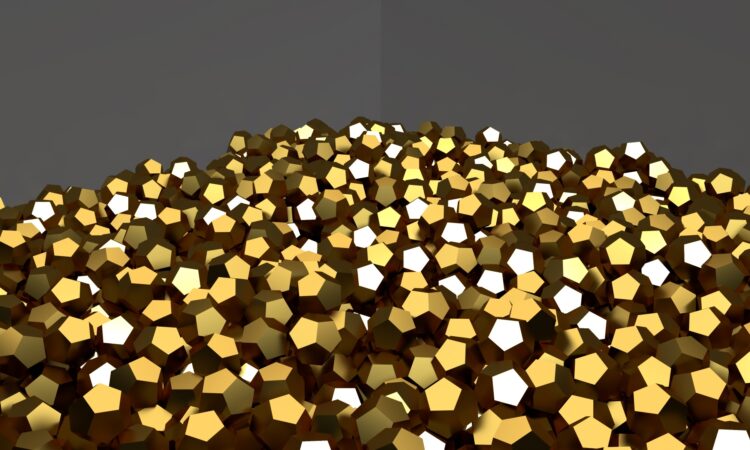 Metallic gold has been used for centuries by different civilizations. Some of its uses include currency, jewelry, and decorations. The use of gold has been sought because of its robustness towards weathering. However, its price and scarcity motivated further developments to decrease the cost of the use of gold. Along with advances in metallurgic processes, the need for practicality and low cost spurred the emergence of gilding, a process that adds a thin (< 10um) layer of gold onto surfaces.

Many gilding techniques have been developed including tin gilding. Here, the metallic tin provides better contact and support to the gold layer, making the gold coating appear thicker. Tin gilding was extensively used during the Italian Renaissance in buildings and artistic pieces. A particular place where this gilding technique was used was in the medieval Muslim Alhambra monument (Figure 1). This monument was built in Granada, Spain, in 1238 and was the State palace. What is interesting about the gilding in this monument is that it shows inadvertent purple colours, differing from the typical yellow/golden of metallic gold.

Although the emergence of purple gold in monuments was unknown to people at the time, the intentional generation of a purple material was known for many centuries. In fact, the pigment Purple of Cassius used in the Middle Ages contained purple gold. Purple gold was also heavily used to colour glass, particularly in the Roman times (see the Lycurgus glass cup). However, it was not until the 19th century that we unraveled the origin of this intriguing material. The purple colour came from tiny gold nanoparticles (NPs) that can absorb and scatter red, purple, and brown light, depending on their size.

These gold NPs with their unique optical properties were both useful and intriguing. Thus, scientists wanted to understand how these tiny (<100 nm) NPs formed in an otherwise low-reactivity metal. With this in mind, a pair of researchers at the University of Granada explored the formation mechanism of gold NPs at the Muslim Alhambra monument.

The challenge here was to unravel the mechanism by which gold was being corroded over millennia, based on the presence of different compounds. Such research would have direct implications for the development of anti-corrosion treatments. The group used X-ray and electron microscopy techniques to map the elemental composition on the gilding layers of the monument (Figure 2). This allowed them to identify the materials present in each of the layers, which could be regarded as corroding species or by-products from it. They characterized several materials including SnO (oxidized Sn from the bottom gilding contact), gold, CaSO4 (used to protect the gilding from deterioration), and minor amounts of SiO­2 (from the monument).

Following these observations, the group proposed a plausible corrosion pathway that could be triggered in a water and chlorine-rich atmosphere, this being the coastal environment near the monument. Essentially, a chlorine-rich solution can etch metallic gold, forming [AuCl4]– compounds, a strong oxidizing agent (a molecule that wants to take electrons from other compounds). Then, the acquired porosity of the gold layer from its slow degradation allows Sn from the bottom gilding contact to emerge to the surface and be exposed to water and oxygen from the air. This forms SnO, which is one of the compounds found by the team. Notably, the tin in SnO has an oxidation state of +2 and therefore, is a reducing agent (a species that has the tendency to donate electrons to another moiety). The combination of [AuCl4]– and SnO ultimately yields gold NPs (Figure 3) through the following reaction: 3Sn2+ + 2Au3+ –> 2Au0 + 3Sn4+ in which the Sn2+ donates two electrons each to the gold.

These findings shed light on a series of unforeseen degradation pathways to yield gold NPs from pure metallic gold over five centuries. Such research will not only inform the archeological community probing the science behind the degradation of ancient buildings and artifacts but will also advance the development of anti-corrosion materials.