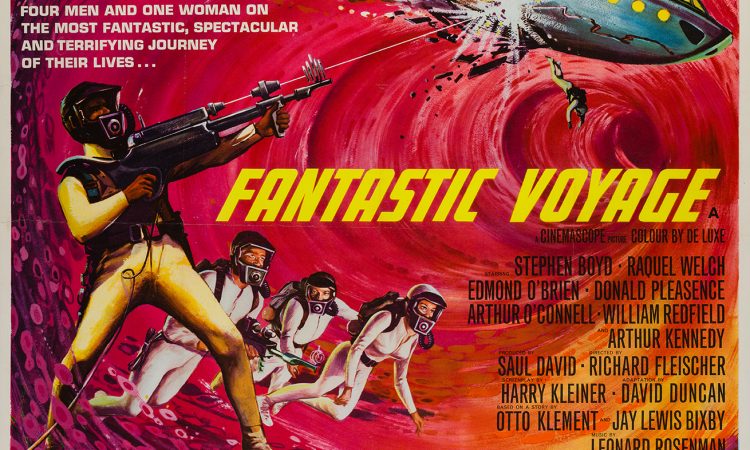 Using tiny machines with even smaller motors in medicine has been a staple of science fiction for decades, ranging back to the 1966 film Fantastic Voyage, in which a submarine full of scientists was shrunk down to perform a microscopic operation. But small, self-propelled devices capable of moving by themselves to deliver life-saving medications are quickly becoming reality. Recently, researchers have made “nanomotors” that not only move independently, but also can stop and start by controlling temperature.

The basic chemistry used to make these motors work has been known for centuries and is based on a common household chemical: hydrogen peroxide (H2O­2). While often used as a bleach or disinfectant, hydrogen peroxide is actually naturally unstable. This means that over time, two molecules of hydrogen peroxide will break down into two molecules of water (H2O) and one molecule of oxygen gas (O2­). While this process happens slowly on its own, if it were sped up, the stream of oxygen made by the reaction could propel an object forward.

The decomposition of hydrogen peroxide into oxygen and water can be sped up in many ways, like heating or exposure to light. But luckily, a metal catalyst can also be used. When platinum nanoparticles are exposed to hydrogen peroxide in a liquid, small bubbles of oxygen gas form at the surface of the particles. If this gas can be funneled in one direction, it can push the nanoparticles forward. And if the nanoparticles are inside of some small structure, it gets pushed forward as well. Think of this a tiny rocket motor, ejecting gasses and pushing the rocket.

This is exactly what researchers were able to accomplish in a previous paper. By trapping platinum nanoparticles in a structure called a stomatocyte, which is a small hollow plastic sphere with a single opening (Figure 1D), nanomotors were made, propelled along a straight line with hydrogen peroxide as their “fuel.” The only way to control these nanomotors was to control the concentration of hydrogen peroxide in solution with them. But now, the authors have developed a way to control the motors without changing the solution: installing a “valve” on the stomatocyte’s single opening.

Figure 1: Forming a stomatocyte from a polymersome. A. The polymersome starts with equal amounts of organic solvent (black) and water (blue) inside and outside. B. When the outside solution is replaced with just water, the walls of the polymersome pull in and change shape. C. The stomatocyte is formed with one large opening. D. Electron microscope image of a stomatocyte. (Figure from dx.doi.org/10.1021/ja104154t)

Adding a valve to the opening of the stomatocyte wasn’t easy; the researchers had to go back to the start of the polymersome synthesis. First, some of the polymers used to make the polymersome were changed so they had bromine atoms at their ends. Because of this, there were bromine atoms spotting the surface of the stomatocyte after it was made. Then, the authors used a process called surface-initiated atom-transfer radical polymerization to attach a different polymer, called poly(N-isopropylacrylamide) (PNIPAM), to the bromine on the surface.

The authors measured this temperature effect in a few different ways. First, they looked at the velocity of the stomatocytes at different temperatures. Stomatocytes without PNIPAM didn’t slow down at higher temperatures – in fact, they moved faster due to stronger decomposition of hydrogen peroxide (Figure 3A). However, the PNIPAM coated stomatocytes stopped almost completely at 40 °C. Importantly, the motor could be restarted by lowering the temperature again to 30 °C, and then stopped again by raising the temperature (Figure 3B). The temperature could be cycled like this indefinitely, stopping and starting the nanomotor every time. The stomatocytes also moved in nearly straight lines, indicating that only one major force was pushing them forward (Figure 3C). This was measured by calculating the “directionality” (D) of the stomatocytes, where D = 1 is a perfectly straight line and D = 0 is completely random. While control of these stomatocyte nanomotors is limited – only stop/start movement, with no in-between – this method gives much more control over the motion of the stomatocytes than was possible before. The researchers have also recently published a paper with similar stomatocytes designed to deliver cancer-treating drugs and then biodegrade in the body. With these developments happening faster than ever, it seems like the science fiction vision of nano-sized drug delivery vessels may be just over the horizon.