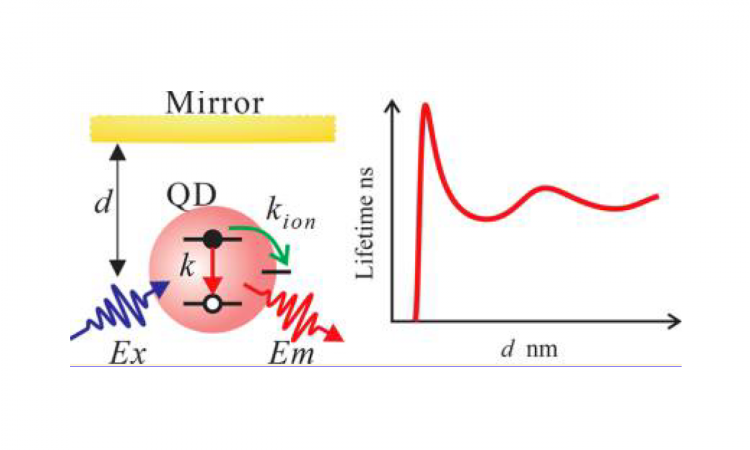 Everyone’s familiar with mirrors. You probably look in one every morning: check out how great your hair looks today, maybe use it to take a rad selfie. But the idea of using mirrors to look at molecules – that just sounds crazy, right? In fact, a groundbreaking work in the 1940s was the first to use a tiny mirror to look at the fluorescence emission of a single molecule. Scientists today continue to build on this work. In this Chembite, we’ll talk about how some researchers used this tiny-mirror method to look at one of today’s most exciting new materials: quantum dots.

If the name “quantum dot” is bringing back memories of physical chemistry class, you’re on the right track. Quantum dots are tiny, roughly spherical particles, often of an inorganic crystal like cadmium selenide (CdSe). Because they’re so small, they have some pretty interesting properties. One of these is that small differences in a quantum dot’s size can directly affect the wavelength of light that it absorbs and emits. This makes them ideal for applications like light emitting diodes (LEDs). You may even have seen quantum dot TVs advertised – but they have many applications outside your living room as well.

One major obstacle facing quantum dot technology is a phenomenon known as “blinking.” After a quantum dot absorbs light, it must get rid of that energy somehow. One way is to re-emit this energy as light. The process by which the quantum dot re-emits this light enables technologies like LEDs and is called fluorescence. But in “blinking” quantum dots, sometimes this emission of light won’t occur because the energy has gone into a competing process in the quantum dot. Understanding why blinking occurs, as well as how to measure the amount of light a quantum dot is emitting despite this blinking, brings us to the micromirror employed by researchers from Paul Mulvaney’s group at the University of Melbourne in Australia.

Looking at individual molecules – or quantum dots – is a pretty tricky process. Just imagine trying to isolate something much, much smaller than even a grain of sand – let alone measure any of its properties! So make no mistake, this is no ordinary mirror. Instead of helping you out with your selfie, it’s helping researchers paint a picture of chemistry on a nanometer scale.