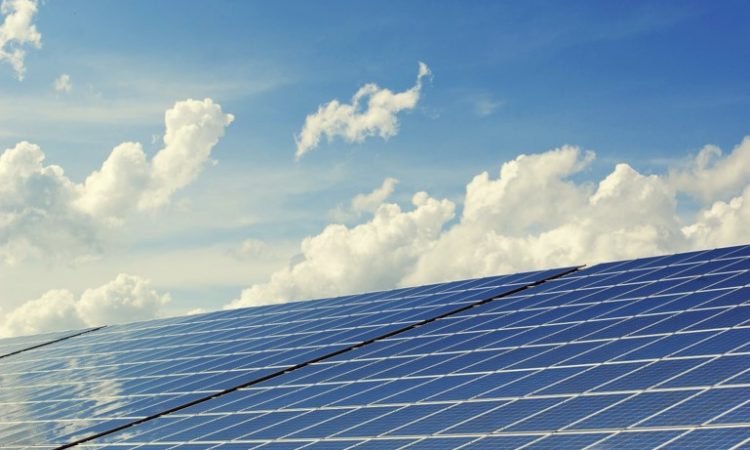 Solar panels are a clean source of energy that only require sunlight to generate electricity. They are touted as the technology of the future. The main reason solar panels are not more popular is cost. Solar panels are much more expensive (without subsidies) than the current natural gas-based power plants that dominate in the U.S. energy landscape.

A team of 25 U.S. researchers at the National Renewable Energy Lab and University of Toledo are working on this problem to make inexpensive solar cells. Solar cells are the individual working component in solar panels. The researchers aim to achieve this by increasing the power conversion efficiency (how much energy is produced under sunlight) of halide perovskite solar cells. Halide perovskite is made up of an AMX3 crystal structure (A= monovalent cation, M= metal, X = halide) (Figure 1).

Figure 1. (Left) The crystal structure of perovskite solar cells. Light blue is the metal (Pb and Sn) and red is iodide. (Right) The operating principle of a tandem solar cell, with the top cell absorbing the blue light, and the bottom cell absorbing the red. (from pveducation.org)

Halide perovskites are an extremely cheap material. Perovskites can be solution processed at ~100 °C and do not have to be purified. These factors provide the potential for perovskite production a very inexpensive process compared to the multiple >1000°C treatments required to make commercial silicon solar cells.

The bottom cell here is a complex alloy of Sn and Pb halides to form a thin film. This structure absorbs red light starting at ~1015 nm, where the top cell, which contains no Sn, absorbs light starting at 760 nm. Typically, Sn-Pb alloy perovskites can be fabricated into solar cells of about 15% efficiency. To make a usable all-perovskite tandem cell, the bottom solar cell needs to be closer to 20% efficiency.

To achieve high efficiencies with Sn-Pb alloy perovskites, the researchers used a chemical additive called guanidinium thiocyanate (Gua-SCN) when depositing their films from solution. This leads to significantly better film formation of the Sn-Pb perovskite. The Gua-SCN potentially interacts with the perovskite because guanidinium has multiple nitrogen groups and the thiocyanate can replace small fractions of iodide (both are -1 charges). What the researchers observed with the Gua-SCN additive is superior film morphology and the inclusion of Gua-SCN at the boundaries within the film, called grain boundaries (Figure 2). Grain boundaries are common sites for undesirable electronic processes to happen inside film. Grain boundaries can act as electron traps, which reduces current in solar cells. When grain boundaries are properly passivated this can be mitigated.

Figure 2. Micoscopy showing (A) Without gua-SCN and (B) with gua-SCN showing the superior film morphology. (C) High resolution transmission electron microscopy showing the formation of a Gua-based structure at the edges of the individual grains (area labeled 7.1 Å).

To test their superior additive, the researchers fabricated solar cells based on their new Sn-Pb alloys. The solar cell consists of the a transparent contact (ITO), and electron harvesting materials, and top contact Ag (Figure 3). The power conversion efficiency was improved to 20% with the new film treatments (up from 15%).

Figure 3. (Left) The power efficiency is a combination of voltage and current shown in an I-V curve. This shows the Sn-Pb alloy was ~20% efficient. (Middle) A spectra showing the performance of the tandem cell as a function of wavelength. This shows the bottom Sn-Pb alloy cell (yellow line) converts most of the red light (700-1000 nm) into electricity (% of EQE). (Right) a chart showing the 25% efficiency of the overall tandem device.

When the optimized Sn-Pb-GuSCN was made into a tandem cell with another Pb perovskite top cell, the complete stack had efficiencies of 25%. For comparison, commercial silicon sits around 20%.. However, the future of processing this material relies heavily on one major drawback: stability. Perovskite researchers are looking for ways to prevent these devices from degradation, which is difficult. But now that we have 25% efficient tandem cells, there is strong motivation to solve the stability issue. Tong et al. produced an all-perovskite tandem solar cell that surpasses the available market option with lower cost processes.