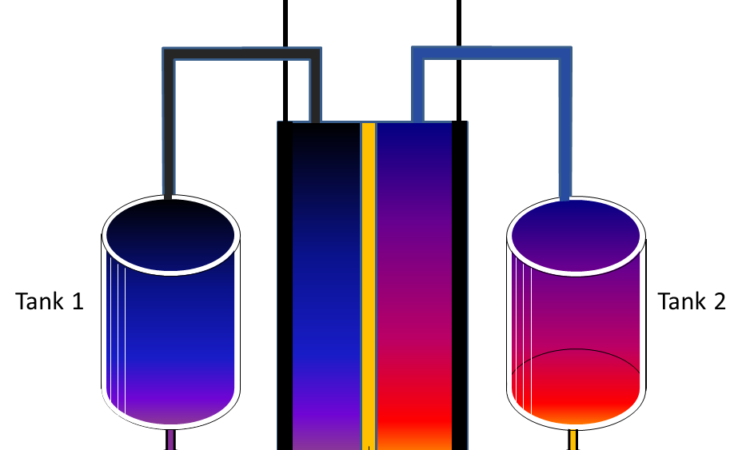 Wind and solar energy are becoming increasingly inexpensive, allowing economic competition with fossil fuel sources of electricity leading to many new installations every year. However, wind and solar are intermittent meaning electricity cannot be produced if the sun is not shining or the wind is not blowing. These forms of energy production require energy storage, often in the form of batteries.

Recently, the Schubert group in Germany published a paper detailing a new molecule for use in redox flow batteries. Flow batteries work by taking molecules that can store energy in the form of electrons and putting them in two different tanks. From these tanks the molecules can be pumped to an electrode, often carbon paper, where they will exchange electrons and allow energy to be released from the battery. While these batteries have traditionally used the metal vanadium, organic molecules are interesting replacements because of their earth abundance, structural diversity, and potential low cost.

The Schubert group started with a cheap and readily available material 2,6-diaminoanthraquinone (DAAQ, Figure 1) that is commonly used in the dye industry. Because of DAAQ’s market availability, it would be an ideal replacement for flow batteries. However, the molecule is not particularly soluble in water, so it can’t be dissolved in the tanks of a redox flow battery. To make the molecule more soluble the authors reacted DAAQ with a sulfonyl chloride to produce a sulfonamidic acid with a negatively charged oxygen to increase the solubility in an aqueous solution (Figure 1). This compound was found to have a solubility of 0.750 M in pH 14 aqueous solution.

Figure 1: Synthesis of the redox active molecule. Step A uses pyridine in dichloromethane to attach the sulfonyl chloride to the anthraquinone core and step B replaces a hydrogen on the OH group with a lithium cation. (Figure taken from paper under creative commons license. Labels added afterwards.)

To test how DAAQ might perform in a battery the authors charged the molecule up halfway and then split it into the two tanks of a redox flow battery, with more of the molecule in one tank than the other. The side with less is the capacity-limiting side, because the battery won’t continue to charge once it is fully charged, and can be used to study the long term performance of the battery.

The battery was prepared initially at 0.1 M and was charged and discharged 50 times before being held in a fully charged state for 24 hours to mimic how batteries being used in a real utility setting might be help in a fully charged state. This was then repeated a total of 9 times. After the first five 24 hour holds, the temperature was increased from room temperature to 60oC. They found the battery lost its charge at 0.18% per day overall, although all of this fade was during cycling and not during the 24 hour hold period. The fade rate did not change when the temperature 60oC (Figure 2).

Figure 2: On the left, a 0.1 M solution of the molecule loses the amount of charge it can hold (capacity) at 0.18%/day at both 32oC and 60oC as shown by the marks in red. One the right, a more concentrated cell at 0.75 M loses capacity at 0.21%/day at 32oC and 0.80%/day at 60oC. The blue lines represent how many electrons were recovered from the battery divided by the number of electrons put in during that same cycle.

The researchers then tried a cell in more realistic conditions at a concentration of 0.75M cell This cell initially had a fade rate of 0.21%/day but when the temperature was increased this increased to 0.80%. The researchers suspect this might be related to the chemical degrading, but did not run any tests to confirm what chemical changes might be leading to the faster loss of capacity.

The published molecule has good, but not record breaking, stability and a simple and cost-effective one-step synthesis. While there are still questions about how the molecule decomposes and how it would behave under long term cycling or in more commercial-like applications, the molecule and molecules made by similar synthetic strategies have potential to provide low -ost energy storage in the future.