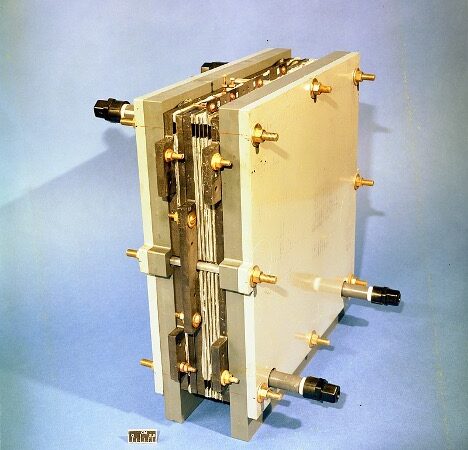 Title: Demonstrating the use of a Fungal Synthesized Quinone in a Redox Flow Battery

Solar and wind energy are an essential part of addressing the challenges of climate change by providing grid electricity without ongoing carbon emissions. They are also becoming increasingly inexpensive relative to fossil fuel sources of electricity. However, a challenge is posed by the inherent intermittency of these sources of electricity. If it isn’t a sunny or windy day, no electricity can be produced. Large-scale energy storage is an attractive solution to help provide electricity at moments when production is high and store it when electricity production exceeds demand.

While historically electricity storage has relied on non-chemical means like pumping water up a hill or, increasingly, on lithium-ion batteries, redox flow batteries are a growing portion of the energy landscape. These batteries store energy in the form of charged molecules in two large tanks that can be pumped passed the battery stack to store or extract energy. While most redox flow batteries use vanadium chemistry because of its many redox states, some research has increasingly been done on using organic molecules instead because organic molecules are potentially plentiful and inexpensive. Most proposed organic molecules, however, are biproducts of oil refining and not truly renewable. A recent paper published by researchers in Denmark proposed an alternative molecular design pathway using materials derived from fungi.

The researchers took the fungi species Penicillium atrosanguineumwas (Figure 1) and hypothesized that it could produce phoenicin (Figure 2), a quinone molecule that can be used to store energy, through a specific biological pathway. To test this pathway, they used CRISPR/Cas9 to turn off the gene pathway that previous research on related fungi suggested might produce this compound. They found the fungi stopped producing phoenicin – supporting that this fungi had the genes to produce the quinone.

Figure 1: A fungi from the Penicillium family, related to the one used to produce phoenicin in this work. (Image credit Peter Halasz)

To produce enough quinone to test in redox flow battery, the fungi was grown in the lab repeatedly and then the phoenicin was isolated through a series of chemical steps. This material was found to be able to take up and release electrons reversibly – an important characteristic for energy-storage materials in batteries. Paired with potassium ferrocyanide – a common and inexpensive anticlumping agent used in food – it produced a voltage for the whole battery of about 0.86 V.

Figure 2: Phoenicin (left) and ferrocyanide (right) were the active materials used to store energy in the battery that was tested.

When tested in a lab-scale redox flow battery phoenicin did develop a relatively fast fade rate – a measurement of how quickly the maximum amount of energy stored in a battery decreases as the battery breaks down over time. In organic materials this is often caused by chemical decomposition of the quinone itself. Phoenicin faded at about 2.85%day, which is similar to other quinones but faster than other organic molecules reported in previous literatures which can fade as slowly as <0.1%/day. While the lifetime of phoenicin as a battery material isn’t suitable for widescale use, the development of an active material from a renewable biological feedstock is exciting and could be further used to develop more stable molecules in the future. Energy storage technology is crucial to moving away from carbon-emitting fossil fuels for electricity and renewable feedstocks for battery materials is an interesting area of research.