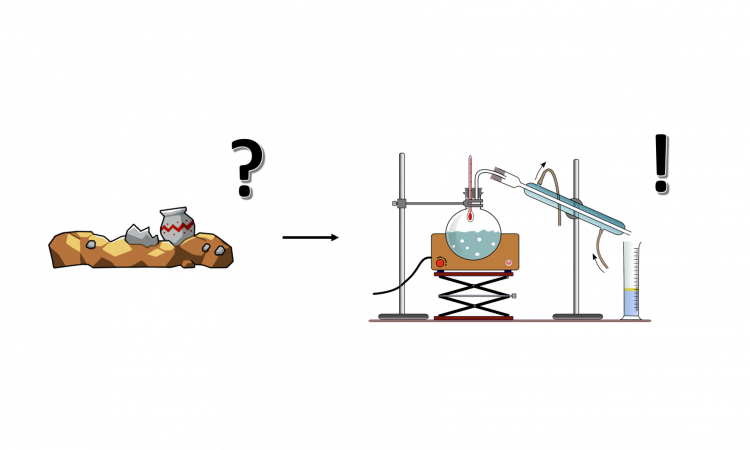 Title: Long-lasting ergot lipids as new biomarkers for assessing the presence of cereals and cereal products in archaeological vessels

Chemical analysis can help archaeologists find out about habits of ancient cultures from buried objects. The study of lipids (long-chain fatty acids, Figure 1) from potsherds (broken pieces of ceramic material), for example, is commonly used to understand food and dietary habits. Although this can seem like a very straightforward analysis, degradation processes need to be considered! Indeed, thousands of years of burial, bacteria and soil conditions can degrade the molecules of interest: understanding these mechanisms become as important as the molecule analysis. This paper presents a new strategy to study cereal uses in the past, exploring ancient diets from three different excavations sites in Italy.

Cereals, such as wheat and barley, were very important in the early stages of human settlements, but we lost most of the cereal traces in buried artifacts. They have been either degraded by physical and chemical conditions of the soil or eaten by insects and bacteria.

The methodology presented in this paper targets the lipids that ergot fungi produce. These fungi commonly attack the Gramineae (common grasses, included cereals) and produce a mixture of lipids that can be used as an indirect biomarker. This mixture is made by more than 70 species, a sort of fingerprint for ergot. Among these, there are diglycerides, triglycerides and higher molecular weight estolides such as the ones shown in Figure 2. The most common substituent in these species was ricinoleic acid (Figure 3) that is chosen, in this study, as a marker to trace cereals from the past. After extracting the lipids, gas chromatography/mass spectrometry (GC/MS) was used to scan the mixture for ricinoleic acid. The samples that showed signs of the latter were further investigated via liquid chromatography coupled with high resolution tandem mass spectrometry (HPLC/ESI-Q-ToF) to confirm traces of cereals and to obtain more information on the vessels. Potsherds from Sardinia and Calabria and stone vessel fragments from Sicily were analysed with this new method (Figure 4). (a) Pithoi from Calabria; (b) stone vessels fragments from Sicily.

From Long-lasting ergot lipids as new biomarkers for assessing the presence of cereals and cereal products in archaeological vessels, http://creativecommons.org/licenses/by/4.0/

The potsherds in Sardinia were found in the anteroom and dromos (walkway) of some typical chamber tombs (Domus de Janas IV, in the necropolis of Molia) from the late Neolithic (3970-3340 BC). The identification of animal remains suggests that these areas of the tombs were used for rituals and animal offering. Potsherds from pithoi (vases that could contain up until 1000 liters of food) in Calabria were dated to the late bronze age (1.300-950 BC). The stone vessels from Sicily were dated to different periods (from the Islamic Age, 827–1061 AD, to the Age of Frederick II, king of Sicily, 1194-1250 AD) and could be identified with different types of cookware.

Among these, 10 samples showed the presence of ricinoleic acid with the first scan. These samples (5 from Sardinia, 4 from Calabria and 1 from Sicily) were further analysed, showing 50 lipids that could be related to ergot.

Preservation and usages account for the differences among the samples and could be exploited to better understand their use. As an example, the chemical composition of the vessel from Sicily indicates the exposure to high temperature (e. g. cooking of flour-based dishes). Cereal traces in pithoi vases indicates a large amount of cereal produced and stored, suggesting improvement in agricultural techniques. The presence of cereals in the Domus de Janas vessels indicate that they were offered together with animals.

In conclusion, this method is important in understanding the use of cereals in the ancient times both dietary- and ritual-related and represents a good example of how chemistry can help archaeologists in their work.