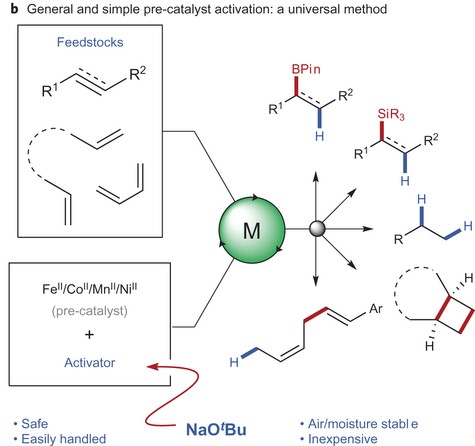 Catalysts are incredibly useful in chemical syntheses because they lower the free energy required to form desired products and thus increase reaction rates. Industries ranging from refining and petrochemicals to polymers and pharmaceuticals rely on precious-metal catalysts for a large portion of their chemical reactions. One example is the precious-metal catalyst reaction that occurs in the catalytic converter of an automobile, which converts toxic gaseous pollutants from the engine into less toxic products using highly expensive catalyst materials including platinum, palladium, rhodium, and gold (Figure 1). In order to keep catalyst-based industries sustainable and profitable, new catalysts need to be developed that utilize inexpensive, earth-abundant materials.

The authors here present a novel method for easily forming stable earth-abundant metal catalysts, which are inexpensive and sustainable alternatives to precious-metal catalysts. Earth-abundant metal catalysts are not new, but current methods to produce them typically require difficult synthesis conditions such as air and moisture-free environments that make fabrication expensive and tedious. In addition, catalysts activated through these conventional methods are typically unstable and inconvenient to use. Presented here is a method of general activation using sodium tert-butoxide to stably activate first row, earth-abundant metals including iron, cobalt, nickel, and manganese. Activation of catalysts is the changing of a pre-catalyst material to an active catalyst form via a chemical reaction and can be thought of as an on/off switch for the material’s catalytic properties. Catalysts can also be deactivated by fouling, poisoning, and sintering.

The researchers found that they could activate a wide range of pre-catalyst materials by simply reacting the compounds with sodium tert-butoxide (Figure 2). Using this method, it was found that the activated catalysts consistently produced yields equal to or better than state-of-the-art catalysts. Furthermore, it was shown that catalysts activated using their method could catalyze entirely new reactions that have never before been seen. These results suggest that the activation method developed by these researchers can be used to both activate known catalyst materials as well as discover unknown catalytic pathways.