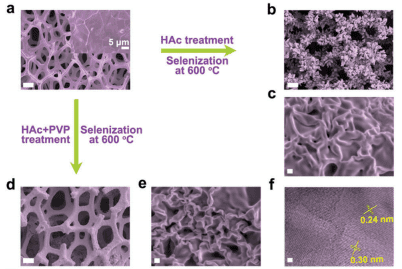 It’s a simple demonstration: hook up electrodes (wires, pushpins, etc…) to a 9 V battery, place those electrodes in water (with a little baking soda added), and voila! Bubbles! Hydrogen gas (H2) from one electrode, oxygen gas (O2) from the other – the splitting of water with electricity, known technically as electrolysis.

Although it looks easy, water splitting is actually a bit of a holy grail because the payoff could be amazing, but it’s difficult to do efficiently with cheap materials. And by amazing payoff, I mean using H2 as a source of energy that is renewable and as green as it gets – it is extracted from water, and, when used, it turns back into water. No carbon dioxide or other unsavory by-products associated with fossil fuels! H2 is already needed to make ammonia for fertilizer via the Haber-Bosch process, but it could also power automobiles and generate electricity on demand.

For decades researchers have been studying new catalyst materials that could make electrolysis of water efficient enough for commercial use. Water-splitting catalysts lower the energy barrier required to break the bonds of a water molecule and re-forge them in H2 and O2. But the best catalysts for H2, platinum and palladium, are way too expensive.

Catalysts based on Earth-abundant (and therefore cheap!) metals like iron, tungsten, and molybdenum have been somewhat successful when combined with chalcogenides (sulfur and selenium) and made into nanostructures. These structures, which have at least one dimension in the nanometer range, offer a lot of surface area compared to their volume. Surface area is super important for catalysts, because the more surface there is, the more “active sites” exist, which is where the chemical reaction occurs. But, as a recent report by Zhou et al points out, these nanostructures are complicated to make and will probably be difficult and expensive to scale up.

Instead of building high surface area nanostructures, Zhou chose to start with a common material that already has a large surface area: nickel foam.

That’s right, “foam” made out of nickel is a thing that exists. It’s used as an electrode substrate for batteries and looks like densely packed steel wool (Figure 1a). Zhou showed that nickel foam can easily be converted into nickel diselenide (NiSe2) while increasing the surface area of the already porous material. The nickel foam was coated in a solution of acetic acid (HAc) and polyvinylpyrrolidone (PVP) before heating to 600 °C in a tube furnace and exposing to powdered selenium in a stream of argon gas. This simple process resulted in nearly complete conversion of nickel metal to NiSe2, with a surface slightly enriched in selenium. Scanning electron microscope (SEM) images showed the surface roughness (read: surface area) of the NiSe2 was increased from the original nickel foam, and could be controlled by changing the HAc/PVP treatment. Neither HAc or PVP were necessary in converting nickel foam to NiSe2, but the addition of HAc increased surface roughness (Figure 1c), and co-treatment with HAc and PVP increased surface roughness even further (Figure 1e). Predictably, this variation in surface roughness resulted in variation in catalytic efficiency; at nearly 100% Faradic efficiency, the NiSe2 made from HAc/PVP co-treated nickel foam was the best of the three catalysts studied.

This very high efficiency rivals that of platinum, so how exactly does NiSe2 do it? In answer, the researchers looked for the most likely active site of NiSe2, in other words the atom on the surface of NiSe2 that is most attractive to a lone hydrogen atom. Using density functional theory (DFT) calculations, they found the free energy of hydrogen adsorption to either nickel or selenium atoms in many different configurations on the NiSe2 surface (Figure 2c). They discovered that the active site is probably an extra selenium atom or two adsorbed onto the 001 surface of NiSe2 (Figure 2a,b) – which totally explains the extra selenium found on the catalyst’s surface! Since nickel foam is cheap and pretty easy to scale up, the conversion to NiSe2 (dip foam in HAc/PVP, blast with selenium powder in a furnace) could become a pretty low cost way of making H2. Most of the H2 we use right now comes from fossil fuels via steam reforming of natural gas, so a greener method of H2 production is sorely needed. With the potential to scale-up this highly efficient catalyst at low cost, electrolysis of water could become a competitive route to production of H2. And by using a solar panel as a source of electricity to drive this catalysis, we could make H2, an easily storable and transportable form of energy as well as an important feedstock, straight from our most abundant natural resource: sunlight.