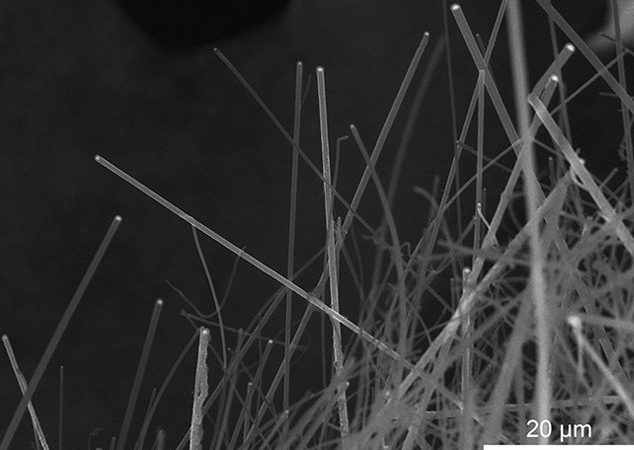 Nanowires are tiny little wires that nano scientists are obsessed with. With diameters about 1/100000th the width of a human hair, the optical and electronic properties of nanowires are very different than macroscopic materials. One extremely important application is in communications, where data transport needs smaller and smaller hardware to fit more and more data. Nanowires can act as little antennas or nanolasers – a prospect that has the communications field very excited about the future.

At the heart of electronic applications is understanding how to make materials. In this work, researchers investigate the growth of lithium-based nanowires. This nanowire growth is a new take on one of the oldest nanowire growth methods.

The first nanowires were silicon (the industry standard semiconductor) grown by a VLS (vapor-liquid-solid) mechanism. This traditional method flows a vapor (silicon gas, SiH4) into tiny liquid metal droplets (commonly gold). The silicon precursor gas dissolves in the liquid metal droplets and grows out into a solid. This seed gold droplet sits on top of the forming wire and the nanowire continuously dissolves and deposits silicon at the base of the gold droplet, making a longer crystalline nanowire.

Here the work is done not on semiconductor silicon, but instead lithium metal. Metal nanowires have not been previously grown by any mechanism mirroring VLS. Instead of using a gas phase precursor, which is difficult with metals, this growth is achieved by a liquid-liquid method of alloying lithium with various metals, including gold. Foils of the metals are pressed together and heated into what is called a melt, a liquid mixture of the two melted metals.

Upon cooling the melt, tiny seeds of Li-Au alloy appear (Figure 1). This forms a drop of gold-lithium alloy at the top of this seed, and as more lithium precipitates out of the melt, a nanowire begins to form. This continues to happen until the sample is completely cool, and the nanowires are fully formed (Figure 1.) Elemental mapping showed the researchers that the wires are predominately LiOH shafts, but the tips are Li-Au alloys (Figure 2). The hydroxide was an unexpected result, but lithium is well known to form hydroxides. The researchers hypothesize that this hydroxide coating likely forms at the surface of the nanowire and prevents lateral growth. This forces the growth in one direction, making the long nanowires.

Figure 2. Elemental mapping of the lithium nanowires, showing (a) the gold-based tip and (b) the predominately lithium hydroxide shaft. Han et al./Nanoletters2018

This paper is mostly about the growth of nanowires, but the color of the nanowires gives us a hint about their very different properties. Lithium metal is lustrous dull grey while these nanowires are red in color. You can see clearly in figure 3, when the sample cools and the nanowires begin to grow, the sample turns from a murky brown to a bright red. That’s one visible feature of what changing the size and shape of a metal does to its properties.

Figure 3. Time lapse of the growth of nanowires showing the formation of a red color. Han et al./Nanoletters2018

These tiny metal nanowires are super interesting to the field of photonics, which is the science of light manipulation. You can imagine that if the wires are able to change the color of light observed, they can also manipulate signals via light, which is the basis of communications (like the internet). It will be interesting to see other reports on synthesizing metal nanowires and the kinds of applications it could revolutionize.